OK, who let the Leverett Circle genie out this time? 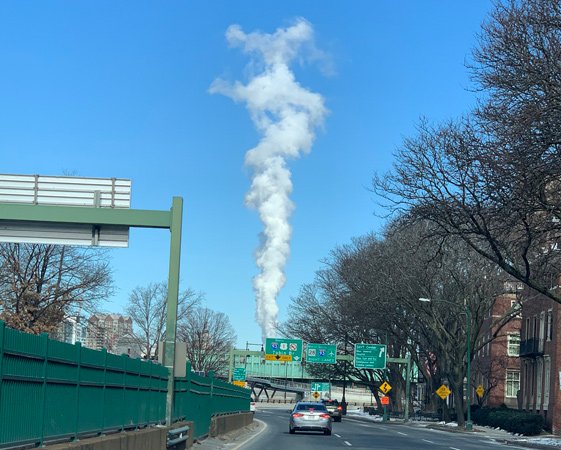 Shamus hopes the genie is in a good mood at least.

Mystic Units 8&9 are coming out to play

The short stacks on the power plant burn natural gas only. Very unusual plant in that its fueled by LNG from the Everett terminal. It can't get natural gas from the gas grid.

Viewed from the north, it looks really cool b/c you can see the two separate columns rising straight up b/c its so still

Are getting less and less use, too. Solar power has increased enough that it has shaved back the peaks, especially on the highest energy use days. So the summer days when we use a ton of power for AC are not peaking between 1 and 3 p.m., but rather between 5 and 6, when it's still hot, but solar is coming offline. This is demonstrably good, because it means that peaker plants like this one (and the coal plant in Bow, N.H.) are less likely to run, and they're generally the worst polluters. (Exelon in Everett is planned for closure in 2024.)

They still wind up running in winter because natural gas is diverted away from other plants in order to heat homes, so the normal natural gas plants come offline, and the peaker plants have to go into action. In the summer, there's plenty of natural gas, so the coal plants are less likely to be needed, even if demand is higher.

So, what you can do is turn down your thermostat in winter and put on a sweater, like Jimmy Carter told you to. If enough of us do that, demand for natural gas won't spike quite as high, and we won't have to run the most-expensive, most-polluting power plants.

Let’s hope Shamus is a responsible driver and wasn’t behind the wheel when he took this pic.

The Cardinals have voted

I guess a new pope has been chosen.

Smoke pouring out all day long.

That smoke you see on the

That smoke you see on the horizon is coming out of the Tin Man ( from the wizard of Oz’s) Ears!!! after learning he has to wait over 12 hours to receive a Covid19 shot at one of the hospitals on Longeood ave.

Nazi brownpants with riot shields parade through Boston after members pulled out of clown-car U-Haul in Idaho
Two Esplanade swans euthanized after falling ill with what appears to be avian flu
Trademark lawsuit over name of new Italian restaurant on Newbury Street gets ugly
Man tries to jump over Public Garden fence, doesn't quite make it, impales himself
Our rainbow drought ended this evening
Storrowing is easy; try getting your car up on a guard rail