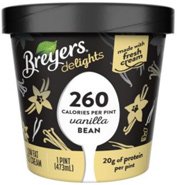 A Pittsfield woman who claims she was shocked to learn that Breyers Delights Vanilla Bean Low Fat Ice Cream is not, in fact, made with vanilla beans, is now seeking more than $5 million in damages for herself and all other Massachusetts residents who should be similarly outraged at the alleged deception.

In a suit filed this week in US District Court in Boston, Heather Bernstein says she only bought the stuff - several times - "based on the representation and reasonable belief that the Vanilla Bean ice cream contained vanilla beans," specifically:

The Product's front label prominently and conspicuously displays the words "Vanilla Bean" ice cream and an image of a flowering vanilla plant that contains vanilla seeds from the vanilla pod.

Additionally, the Product's tiny black specks misled Plaintiff and the Class to mistakenly believe that the Product contained vanilla beans.

But the flurry of bean representations on the Breyers packaging deceived her six ways to sundae and put her in a bad humor when she looked at the ingredient list and discovered there weren't any vanilla beans, the suit continues:

In truth, however, the Product does not contain vanilla beans.

Instead, the Product is flavored by "natural flavor" that provides for the Product's characterizing vanilla flavor.

This, her suit charges, is "deceptive, misleading, and unjust" - a key phrase because, in addition to suing under federal law, she is also suing under a Massachusetts state law that prohibits "unjust enrichment" for "wrongful conduct."

Any food product that is expected to contain its characterizing ingredient but does not, and instead is flavored, must disclose that fact to consumers on the Product's front label. Failure to do so misleads reasonable consumers into believing they are purchasing a food product with qualities it does not have and is in clear violation of the law.

The complaint dishes on just what's so deceptive about the packaging:

Some oil, protein, essence, or other extraction of the vanilla bean may have been used to create the Product's natural flavor. However, that natural flavor does not consist of "vanilla beans," as a reasonable consumer would understand. Instead, the scientists who created the Product's natural flavor would have isolated proteins from the vanilla bean's cells and tissue or extracted oils or essences from the vanilla bean. However, because those isolated compounds may not taste like vanilla, the scientist would have combined those extractions with any other extractions from other plants and animals to create a flavoring substance that tastes like vanilla.

She wants small beans in her ice cream?

(Shouts to the stock room) “Hey Bobby, this one wants beans!”

Typical, these kinds of

Typical, these kinds of people , all they think about is making money off of others..

Bryers DID actually contain ground vanilla bean, ground up. Little dark specs and it had some texture to it. It was somewhat unique as one of the only vanilla ice creams you could get in the supermarket that was in fact actually made with real vanilla beans.

I think the label even used to say "made with real vanilla beans!"

You know what's funny? You go to europe an imported commercial US food has half the label covered over with stickers because the claims about benefits and contents don't meet EU standards.

Perhaps maybe the woman should go after the FDA before attacking breyers, it’s the FDA who approved the ice cream.

FDA does not pre-approve labels...

FDA says it is incumbent upon the manufacturer to comply with all labeling requirements. Enforcement doesn’t happen until a violation is brought to their attention.

Also, this label is deceptive, but it may not be breaking any FDA regulations.

You must be fun at parties!

Stepping on jokes, splainin’ things to everyone.

WTF is "natural flavor" any

WTF is "natural flavor" any way? I see that on almost any processed food product.

And I wish I was kidding

What they're probably doing is playing games with how they get the vanilla flavor from the vanilla plants. The processors will extract the beans for really high end products (like the other ice creams mentioned possibly) and then pulp and extract the oil from the husk and other parts and sell that to Breyers which will be cheaper and lower quality flavor. They could put vanilla oil or something like that...or they can just hide it behind "natural flavor".

gonna add this in the TodayILearned forum on Reddit

You're a dream crusher

What Kaz said. Anyone who thinks its beaver secretions has never dealt with actual beavers before, lol.

Her lawyer called her a reasonable consumer

Yeah, she is reasonable

Why is it unreasonable to expect a billion dollar multinational cooperation to not lie and be deceptive on their packaging?

Deceptive marketing should be handled by the feds but since the government works for corporations, not citizens, they don't do their job. So instead lawyers and astute citizens need to take their place and hold companies accountable for their packaging and contents.

More power to her. I hope she wins big.

Few intelligent people would expect, for example, a green apple Jolly Rancher or watermelon Now & Later to have actual fruit in them because it says “artificially flavored” on the front of the package.

I suspect that Breyers could have inoculated themselves from liability if they conspicuously labeled the front of the ice cream with “made with natural flavors”, yet Breyers made the calculated bet that such a label would make it obvious that the product lacked real vanilla and vanilla beans and it would hurt sales. Knowingly omitting such language from the front label to preserve sales is the very definition of deception.

She won't get 5 million dollars

The lawyers will do ok though if Breyers settles.

The $5M—or whatever a settled amount may become—will be spread out over everyone who qualifies as part of the class.

Dig out your Stop & Shop receipts and chec to see if you bought any Breyers in the last year; you may be able to get piece of the action!

I'm a Häagen -Dazs gal myself

By the end of it, you'll all

By the end of it, you'll all be entitled to 30 cents or half off one container of ice cream. I joined the class in Hendricks v. StarKist Co. and I'm fairly certain I never received my $2 check, which when I opted in, was $25.

So what are the black specks,

So what are the black specks, if not vanilla bean bits?

One possibility would be processed vanilla bean husk. Not something you'd want to list on your ingredients so you call it "natural flavor".

I’m sick of the “natural

I’m sick of the “natural
Flavor “ shit. Just tell us what’s actually in the product you’re selling us. I hope she wins

Seltzer is notorious for using “natural flavor” as ingredient

Both natural and artificial flavors are synthesized in laboratories, but artificial flavors come from petroleum and other inedible substances, while “natural flavor” can refer to anything that comes from a spice, fruit or fruit juice, vegetable or vegetable juice, edible yeast, herb, bark, bud, root, leaf—yes, we’re still going—meat, seafood, poultry, eggs, dairy products, or anything fermented from those foods, according to Food and Drug Administration spokesperson Deborah Kotz.

When certain ingredients fail to exceed +2% of a product’s formulation, manufacturers are allowed to use such terms as “natural flavors”, “artificial flavors”, and “spices” on the product’s ingredient statement in order to save room on the label and to hide trade proprietary recipes.

Best way to get your very vanilla ice cream

Are there any ice cream "deserts" anywhere in MA? I've roved the state on a bike and have yet to find any.

It depends on what you consider to be 'ice cream'.

Places like Dairy Joy in Weston or Soc's in Saugus shut down for the winter months.

Nope. No deserts in MA lol

Even in "the olden days"

I always liked the Rubel bike maps inclusion of a symbol denoting an ice cream parlor, they definitely knew their audience.

Dont tell her about the

Dont tell her about the chicken pot pie.

It's the coldest day of the winter so far...

... and this woman wants ICE CREAM?

Turn the heat up, eat some

Turn the heat up, eat some ice cream, pretend its not Hoth outside. Shaw's has their brand of ice cream on sale this week, but I have a couple of cartons of Friendly's ice cream in the freezer that I bought a few weeks back.

Cold weather puts me in the mood for ice cream

as it does for many a New Englander.

(But we also can assume that this lawsuit was not filed instantly, and for that matter she may have been eating it for years and only noticed this winter that the labeling was deceptive.)

One of the things I like about living here is that (most) people don't think I'm weird for eating ice cream year-round, though it's been a few years since I walked down Mass Ave in the snow, eating an ice cream cone.

It's pretty much ideal weather for buying ice cream, in terms of getting it home before it melts.

According to Ben and Jerry (in their cookbook), New Englanders eat more ice cream than any other region of the country, and we eat it year round.

Breyers used to stand for quality and purity of ingredients.

It makes me sad to see Breyers can no longer be relied upon for high standards. Remember the ads where the kids read the ingredients, and there weren't any weird chemicals?

If these lawsuits are

If these lawsuits are supposed to be a deterrent, why do they keep happening?

I think we need a different system for enforcing truth in food labeling.

I for one actually am offended

Before the brand was sold to Unilever, Breyers was hands down the best ice cream you could buy in a big grocery store. They had no additives and actual flavors not just "natural flavors" — they made a big deal of printing the ingredients in large print.

This made the ice cream have a different texture than other brands. When Unilever got the brand, they decided that this all wasn't worth it and kept marketing as a premium brand but changed it to be just like any other mass produced ice cream.

So here we are.

It's almost as if unfettered

It's almost as if unfettered capitalism doesn't always work out to the best advantage of the consumer!