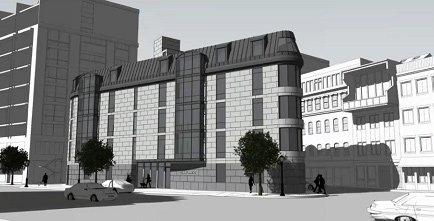 The Zoning Board of Appeal today approved a five-story, six-unit residential building on the triangular lot where Commercial Street ends at Atlantic Avenue in the North End.

Property owner Richard Walsh will occupy one of the three-bedroom units, which will give him a quick commute to his job at Walsh Brothers, Inc., just on the other side of Commercial Street.

Under Walsh's plans, the lot, formerly home to a series of small buildings that included a laundry and a gas station, will house four single-floor units and two duplexes, with a common rooftop deck and a ground-floor garage for six cars.

Some residents who testified praised the proposal as a modest, well designed replacement for what has long been a neighborhood eyesore. Residents of two neighboring buildings opposed the proposal, saying it would deprive them of their views of the waterfront and fresh air.

Because of the split, the mayor's office took no position on the proposal. City Councilor Lydia Edwards (North End, Charlestown, East Boston), however, opposed the proposal, as did at-large Councilors Julia Mejia and Michelle Wu.

Please allow me to be the

Please allow me to be the first person to say that this is a terrible, ugly building. So bad. Just awful. Nothing redeeming about it. Furthermore, I hope that the architects are thoroughly ashamed of themselves.

What's an example of a building built in Boston within the past 20 years that would meet your approval of good design and you would find suitable for this location?

Not in Boston. First thing that came up on Google.

What's an example of something in this city that you like. Needs to have been built this century.

There isn't a comparable pie

There isn't a comparable pie-shaped (flat-iron) building that I know of that is a recent addition in Boston specifically. That was your question I believe.

I came here for the rant against the anti-housing NIMBYs and their silly "fresh air" complaint. I forgot about all the architecture critics who personally designed the Sydney Opera House.

this is a terrible, ugly building. So bad. Just awful. Nothing redeeming about it. Furthermore, I hope that the architects are thoroughly ashamed of themselves.

Honestly, I don't see the problem with the design. It even has a little mansard roof to blend in with the surroundings. And a lot of glass facing the water so it doesn't blend in too much. I will depend on what materials they are using for siding: What looks like stone here could be cheap shite in the end.

What we really need is a place like the one that was at the corner of Merrimac and Portland streets. The kind of place where drinks get cheaper as the night goes on.

Cool reuse of yet another parking lot

Can't wait to see how many comments are basically WE MUST REBEL AGAINST MORE HOUSING AT ALL COSTS! PRESERVE THE HISTORIC CHARACTER OF THE PARKING LOT!

This parcel was never a parking lot. This project ensures the first floor will be one in perpetuity though :(

This building hurts literally no-one, it's not disruptive of the look of the neighborhood, and turns a parking lot into a nice source of tax revenue and construction jobs. Why would anyone oppose this outside of hating development?

I know it was ugly

But I kind of liked it when that single story, funky brick building that used to be there housed a florist shop.

I think it's not bad. More images here:

The main thing I don't like about it is there is no pedestrian scale at street level. It's all garage door and loading dock. Kinda gross and turns away from the neighborhood. It's the same on both street sides.

I couldn't care less about the style of the building or whether it fits with some abstract notion of neighborhood character. I'm concerned about two things:

This project succeeds at #1, but fails miserably at #2.

Wu (or her staffer) actually

Wu (or her staffer) actually showed up to a ZBA meeting and opposed something?! Must be an election year.

Ummm.... what happened to the

Ummm.... what happened to the dry cleaner? I left some work shirts there.

Salem Street in the North End to get an ice-cream shop
Citizen complaint of the day: North End trash barrel was pretty in pink, put it back!
North End restaurant owner who hates paying to put his tables on the public sidewalk also hates Biden voters, hopes they crack their skulls
Outdoor-patio lawsuit: The musical
Four North End restaurant owners make federal case out of outdoor dining fee, but say $1.5 million each would make them whole
North End mythtake: Skinny house on Hull Street wasn't built out of spite