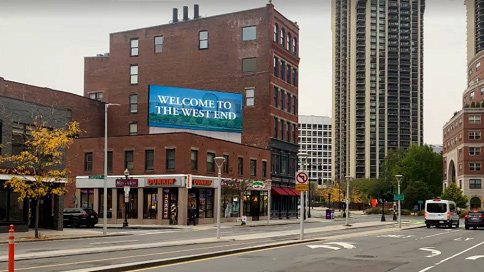 The Zoning Board of Appeal today rejected a billboard company's plan to stick a 24-hour electronic billboard on top of the Dunkin' Donuts on Causeway Street at Lancaster Street, across from the Tip O'Neill Building.

In a 5-2 vote, the board sided with City Councilors Kenzie Bok and Ed Flynn that Media Vision, Inc.'s need to make money was not enough of a hardship to overrule a zoning prohibition against billboard in a historic district, one that could distract drivers at an intersection that is already dangerous for pedestrians.

The city currently has three areas - the Seaport, Landsdowne Street and the Theater District - where such signs are allowed, with zoning-board approval. Everywhere else, the signs are forbidden, which would require the board to grant a variance, which requires proving the zoning is causing an undue hardship on the applicant.

"We really feel it's incredibly important for the board not to sort of set a precedent of granting a hardship for electronic billboards," because once one is given, it could open the rest of the city up to them, Bok said.

Bok added that while that particular section of Causeway is now limited to commercial uses, the broader area is rapidly becoming residential, and the last thing it needs is "a tax on people's attention whenever they step out into the public realm."

Jay Walsh, representing the Downtown North Association, said the burgeoning Garden/North Station project down the street might be a better place for electronic billboards.

Some area non-profit groups, however, backed the proposal, because of Media Vision's promise to give them time and space on the board for PSAs.

Jeff Hampton, a planner with the BPDA, also urged the board to reject the proposal. He said the BPDA is currently working on a zoning change to further control electronic billboards, including limiting their approvals to just eight years at a time, requiring BPDA licensing and setting limits on their hours of operation, brightness and how quickly the ads on them can change.

Will do this but when it comes to Roxbury they will approve any ridiculous pipe dream a developer wants to construct. Janey knows and doesnt care.

I do not know of Mayor Janey’s positions in her district but I do hope she has a deeper concern for her new mayoral district. If it appears that she does not have a concern of the residents who vote, then the ballot box will reveal itself.

Electronic billboards, especially, sound like they would be a hazardous distraction to pedestrians, cyclists, and motor vehicular traffic alike.

This is a city wide issue. Digital Billboards should not even be considered in neighborhoods. They are Forbidden by Zoning. Would literally change the face of Boston, and not in a good way!

The ZBA, under dubious circumstances, approved a digital billboard at Boston Bowl in Dorchester. This will distract drivers on Rt 93 and will be highly visible from Tenean Beach, Victory Road Park and Squantum Point Park. Within 309 ft of Neponset River Area of critical Environmental Concern. Environmental and Social Injustice. DCR Commissioner James Montgomery, Secretary of Energy and Environment Kathleen Theoharides, Senator Nick Collins and Representative Dan Hunt should oppose this billboard before it goes to the State DOT Outdoor Advertising Board for approval.
Help is needed to convince the above officials to oppose this billboard!

I do not know of Mayor Janey’s positions in her district but I do hope she has a deeper concern for her new mayoral district. If it appears that she does not have a concern of the residents who vote, then the ballot box will reveal itself.

She hasn't even been mayor for a week. Let's give her a break. Besides an e-sign across from the Garden is really not at all like condos in a neighborhood.

These electronic billboards are not good for any place.

The West End should not be the only place that should reject the idea of an electronic billboard. They should be rejected throughout the city...period.

Cambridge, Somerville, and Brookline should not have them, either.

Brookline doesn't have any billboards

The posters up on the MBTA C Line shelters are only legal because they're on land not under the jurisdiction of the town.

I know that Brookline doesn't have any billboards.

I know that Brookline has no billboards. Here's hoping it stays that way.

I stand by my opinion that electronic billboards, however, are especially bad, and most definitely should not be put up anywhere, including Boston!

100% Agree. Why should we approve digital billboards anywhere in Boston? It's an eyesore to literally everyone.

does the West End still exist?

Saw it torn down.

Ban all billboards in the

Ban all billboards in the city.

A Google Scholar search for "billboard driver distraction" pulls up thousands of research articles on the topic. One meta-analysis that caught my eye included this:

[A]lthough the subject is under-researched, there is evidence that in some cases overcomplex visual fields can distract drivers and that it is unlikely that existing guidelines and legislation adequately regulate this.

This study using a driving simulator finds that video billboards are linked to measurable changes in driving behavior:

When compared to behaviour when passing static adverts, participants in the study:

And now a word in favor of billboards

No they don't belong everywhere and I'm happy that this one was denied. Still, I don't mind most billboards and in fact find them informative and useful. I know I'm in the minority - my wife strongly disagrees with me - but I'm generally OK with the occasional billboard.

Will it shine into residential windows?

That should be the overriding issue when deciding whether to approve one of these. (Not just current residential windows, but possible future ones allowed under zoning.)

The city should make sure

The city should make sure that doesn't happen.

But they should also ban billboards in general. Billboards trash the place, to make money for a corporation at the rest of our expense.

Not even a corporation. Many

Not even a corporation. Many short-sighted property owners have put billboards atop their buildings, eager to pocket the seemingly free monthly income. What they don't consider is the damage these heavy things do to the structure of the building, but that's a problem for the next owner of the building to solve.

It's nuts that the zoning board vote was 5-2 and not unanimous.

at that size and read quickly..