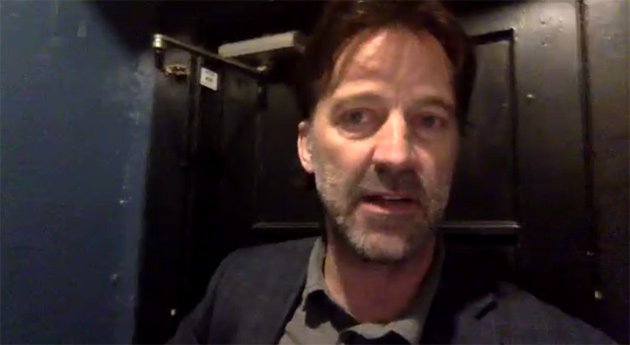 Inside the current Haven, Waddleton listens as residents back his proposal.

Jason Waddleton, owner of Boston's only Scottish pub, the Haven in Hyde Square in Jamaica Plain, tonight detailed his plans to move into the much larger space at the Brewery Complex left vacant when Bella Luna closed a year ago.

In a Zoom meeting with the Jamaica Plain Neighborhood Council's Public Service Committee, Waddleton said the new, larger space would let him create new neighborhood gathering space featuring an expanded menu of Scottish and comfort food - including pizza - events ranging from comedy and musical performances to an expanded Burns Night and a far larger collection of the single-malt scotches the Haven's already known for.

Waddleton said actually converting the old Bella Luna space into the new Haven would not take much work because the Bella Luna folks left it in good shape as a restaurant and event space - and that includes the two pizza ovens he would use to start a pizza service. He said if things go well with obtaining licenses from the city and state, the new space could open in August or September.

He said he is looking at a guest-chef series, in which chefs from other parts of the city would spend a weekend or week preparing their own dishes, in addition to expanding his existing menu. He said he's also looking at summer offerings for the patio the new space comes with.

Waddleton, who has worked in restaurants for much of his adult life, from Scotland and London to Brookline, added he also wants to make the Haven a new music venue for JP residents and musicians; the neighborhood has "an amazing array of talent" and the new space has a dedicated event area.

Unlike many JP neighborhood meetings, which often devolve into tense faceoffs over gentrification, density and the current bland state of residential architecture, tonight's hearing was what resident Scott Shear called "a lovefest." Every resident who spoke, including Shear, supported an expanded Haven.

Sarah Lee, who called herself "a longtime fan of Jason and the Haven," said she is "really excited to have some life back in the Brewery district." Others, who said they still feel the void left by Bella Luna's closing, said they could think of nobody better than Waddleton to bring back the sort of neighborhood spot that Bella Luna provided.

The Public Service Committee then voted unanimously to support Waddleton's effort in general and said that when he formally applies for liquor and entertainment licenses, it will support it at hearings in City Hall.

After the vote, Waddleton acknowledged doubts about making such a major move, but the support from residents tonight convinced him he is making the right decision.

It will be awesome to have two Havens in town!
I wish Jason good luck and best wishes.

...shouldn't that be boiled not baked? Kidding aside seems like a win-win here

Fingers crossed he can get

Fingers crossed he can get that second liquor license for the Brewery location.
I'd hate to see Hyde Square lose it's Haven.

there's another scottish pub in roslindale, but we're not supposed to talk about it online #topSecret #underGround #snag

As someone who works in the Brewery Complex I'm glad that the Bella Luna space will be used as a restaurant again. Personally I was hoping for Tres Gatos to move in and expand. (To say that I am not a fan of bagpipes is a gross understatement.)

Have you ever had a fried mars bar?

If you're going to go up into the hills hunting, you'll need your bagpipes. It's the sound of the pipes that draws the wee haggises out of their burrows so you can bag them.

Not sure if you have been to the Haven but you might be surprised at the menu. Id agree that TG is more my food scene, but the Haven always has something great on the menu and Im usually pleasantly surprised.
Where the Haven really wins over TG is Jason. He has a nack for building real character spaces. He finds incredible musicians and in my opinion was the creator of one of the best music scenes in Boston(well technically Brookline) when he ran the bar at Matt Murphy's in the late 90's- early 2000's.
I'm really looking forward to what he can do with that messed up, beautiful space that was Bella Luna, and a sizeabke entertainment venu.

Love Haven but it's not easy to get to unless you're in JP. It's encouraging to learn that some small businesses are in the position to grow.

Brewery Complex is easy to get to

Plus there is parking, so this will be more accessible than Hyde Square. Very close to Stony Brook Station and easy walk from Green Street. Not a bad walk from Centre St if you are taking the 39 bus.

Clarification about transferring the license

I'm all for this happening. I thought I read previously that the license they have in Hyde Square was attached to that location and could not be transferred. In this story it sounds like it could be moved.

Not a lot of specifics given on that

Based on covering the licensing board, though, I think the regulations are that a license is tied to a specific address. You can move it (restaurants and bars sell their licenses all the time) but that requires a whole new licensing process, involving at least one neighborhood meeting and a hearing before the licensing board, which can take awhile. I don't know if there's any leeway for a case like this, where it's obvious it's the same place, just in a different location, or if there's a risk the board could grant the license to another operator who managed to slip in line first.

And it's all due to the artificial scarcity of liquor licenses, the number of which in Boston is set by the state legislature, in a relic of 100-year-old anti-Irish bias. In contrast, the Haven should have no problem getting an entertainment license, because there is no limit on those.

I worked with Jason when he managed another place many years ago and he asked me to do some Joycean readings for Bloomsday. Me hoping he'll have some fellow actors in this much bigger venue and we can do a grand celebration for the next Robert Burns birthday.

Have I got an intersection for you!