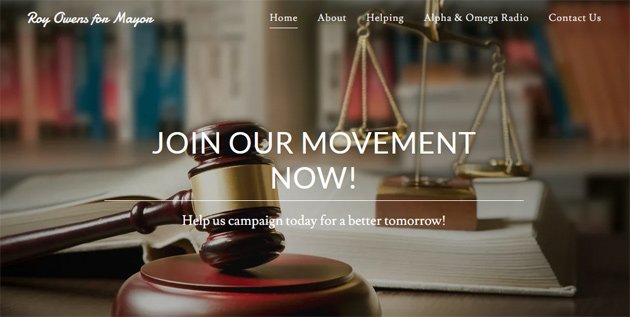 Annual candidate Roy Owens, who normally contents himself with losing races for state rep and city council in Roxbury, wants to try losing a bigger race this year - for mayor.

He's even got a real Web site this time, granted, one that looks like he's running for judge or to represent you on your toughest personal-injury claims. And, OK, he blames Sonia Chang-Diaz for All the Things. But baby steps.

Meanwhile, second-time mayoral candidate John Barros is set to do an "Ask Me Anything" forum, but not on Reddit, which anybody with a Web browser can read, but on Clubhouse, the exclusive audio forum currently limited to people impressive enough to get a very special invite - which was the same sort of buzz-inducing rollout that Google+ tried back in the day.

The sesh starts at 8 p.m. on Monday if you're one of the technorati.

The Job Training Alliance will hold a forum for mayoral candidates focusing on how to ensure "ALL Boston workers thrive in the new economy." Starts at noon on Thursday, and is available to anybody with a Zoom client. Free registration required.

David Halbert, also making his second bid for citywide office, but for one of the four open at-large seats on the city council, recently talked to the Stony Brook Neighborhood Association in Jamaica Plain.

I made the mistake...

Of letting Roy Owens into my house once to listen to his positions when he was running for City Council. What can I say, I had a baby and was bored out of my mind on maternity leave, and he had his adorable grandson with him. Well, that was a terrifying mistake I will never make again in my life, that dude needs some serious therapy.

Ha ha, give Roy some credit;

Ha ha, give Roy some credit; at least he didn't bore you with the same platitudes as the more mainstream candidates and you will remember his passage in your home for the rest of your life!

I like a candidate who doesn't let trivial details (such as what year we are in) stand in the way of a good campaign message.

Why isn’t the mainstream media reporting this!?

7-Eleven has moved to control the alcohol and marijuana drug market in Massachusetts.

As long as people partake legally or otherwise ...

That experience helped me when I moved to the burbs and my new local wingnut came to my door campaigning. I started to close the door and she stuck her foot in it, which I kicked right out again. I'm from Dot, you can't try that shit with me!

Foot in the door is attempted forcible entry

I don’t know Massachusetts law on this topic, but in a lot of places you’d be on solid legal ground shooting someone who tried that kind of forcible entry shit. I hope at a minimum you called the police and reported the assault

Good for you for kicking that wing-nut's foot out of your doorway! It serves that bitch right! She had no business invading your space like that.

My opponents have failed to

My opponents have failed to take a stand against laws forcing pastors to promote unhealthy lifestyle HABITS in their Churches or face jail and large fines.(Laws are written by Sonia Chang-Diaz and support by Ayanna Pressley, Michelle Wu, and other city Councilors).

I feel like there's at least one citation needed here, Roy.

but I'm kind of ashamed of Him. He has this weird obsession with beetles.

... though I give him credit for addressing mortgage inequity in Boston, right before he leaps into accusations of genocide.

One of the things I've wondered about Roy is how he's avoided being sued by Save The Children, though maybe his Save The Children Ministries is far enough below the radar to not infringe on the real charity.

If you don't vote for Roy, Doug or Althea

Whenever they are on the ballot, you're a party pooper. :)

Dave Halbert is a really

Dave Halbert is a really great guy. He's super smart, reasonable, and a good listener. He'd be an excellent councilor.

Back in the day, people would use the condensation from their beer bottle to make three overlapping rings on the bar
Rhubarb
Jehovah's Witness already suing Boston over Covid-19 policies files second suit, this time for firing him as a cop after he refused to get shots
Boston radio personalities who blathered about how much a new Google phone improved their lives were lying because they didn't have the phones, state charges
Covid-19, Bluebikes and an unreliable T put more people on bicycles, advocates say
By Friday, you'll be sick of turkey so time for a Boston ramen crawl