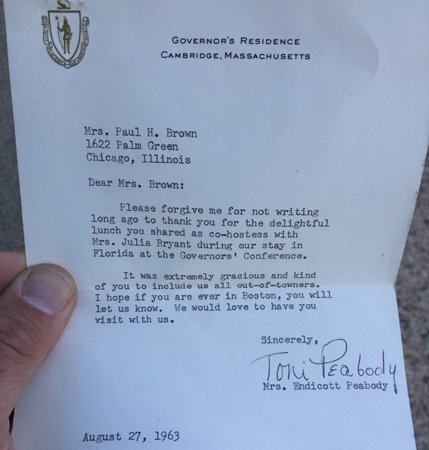 You never know what you'll find just lying or blowing around the streets of Boston. Take this thank-you note, written by Toni Peabody, or, as she was known more formally back in the day, Mrs. Endicott Peabody (or perhaps even Mrs. Endicott "Chub" Peabody), i.e., she was married to the governor of the Commonwealth.

I walk around Boston, like... a lot. As such I see and find many treasures scattered among the trash strewn streets: metal money, paper money, lighters, toys... but this is my most interesting find so far, a signed letter from the governor’s wife from 1963.

And where was this?

Neighborhoods:
Back Bay
Topics:
History
Free tagging:
Massachusetts Avenue
Ad:
Like the job UHub is doing? Consider a contribution. Thanks!

And the question is- What Massachusetts towns were named after Governor Peabody?

Sorry, I couldn't help myself

Endicott Peabody once lived on Rndicott Strret then moved to Peabody

I believe she went by Toni rather than Tori

Stories Have Been Told

Of her many times yelling at State House staff late at night after some amber colored waters somehow threw here equilibrium off a bit.

That was a powerful wind to

That was a powerful wind to blow it here from Chicago.

Now where did I put that?

I'm guessing some archivist will be retracing their steps looking for that. It clearly hasn't been floating around the streets for very long.

I thought about that too. But it could have been someone throwing out a stack of old papers into a dumpster and a few blew away.

Is there anything 'historic' about it? Its just a letter from 1963.

Massachusetts has never had an official Governor's residence, not since colonial days. There have been multiple efforts to acquire or build one, but none ever came to fruition.

So here's a letterhead that just says Governor's Residence, Cambridge, Massachusetts, with no street address.

If the recipient wants to reply, I guess they need to have ESP to figure out the address, or else hope that the U. S. Post Office (not yet the Postal Service) will be able to figure it out. There was, of course, no internet where you could look up an address.

Those were simpler days, pre-Zip Code, and sometimes the post office did fill in the blanks on things like this. In this case, the fame of its addressee might keep the reply letter out of the dead letter office.

For the record, the 1963 Cambridge City Directory shows that Endicott E. P. Peabody and his wife Barbara W. Peabody lived at 19 Larch Road.

Wikipedia confirms that Mrs. Peabody was indeed really named Barbara but that she went by Toni.

They probably could have, but...

If the recipient wants to reply, I guess they need to have ESP to figure out the address, or else hope that the U. S. Post Office (not yet the Postal Service) will be able to figure it out.

They probably could have, but more to the point, this is a thank-you note. One doesn't reply to those.

was on the envelope

That must have been their personal dwelling. Massachusetts has never had an official governor's residence.

Imagine if cars were permanently barred from the banks of the Charles
Flaming manholes heat up Boylston Street outside the Pru
Judge says former celebrity chef no paragon of virtue, but there were too many questions to find him guilty of sexual assaut
Art has a message
Jury selection starts next week for former celebrity chef accused of sexually attacking woman at the Pru in 2017
Liquor-license musical chairs held up due to lawsuit