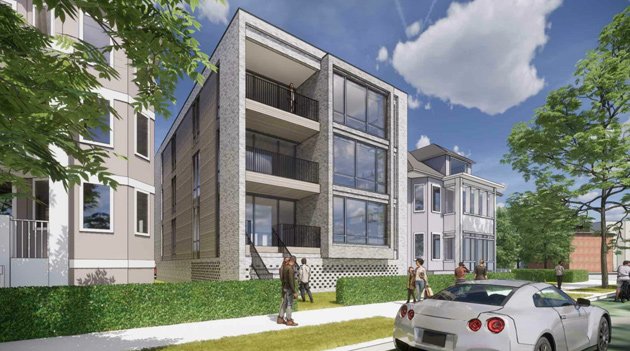 The Zoning Board of Appeal today rejected a proposal by the owner of 25 Dorchester St. to add a roof deck after nearby residents and elected officials said the last thing they'd want to see at a building with frequent 911 calls about loud parties is a place for outdoor partying.

Separately, the board rejected a proposed three-family house at 1778 Columbia Rd. after nearby residents and elected officials objected because it would look nothing like the surrounding triple deckers.

25 Dorchester St. owner Patrick Alviti, who lives on the top floor of the three-family building at the corner with West 2nd Street, had applied for permission to add a 20x25-foot deck for his use only.

The mayor's office and the offices of City Councilors Ed Flynn, Michael Flaherty and Annissa Essaibi George and state Sen. Nick Collins all voiced opposition. "It's a problem property to the neighbors" because of frequent loud parties, Flynn aide Ana Calderon said. Officials said they have gotten frequent complaints from residents about the near weekly need to call 911 about parties.

The board rejected a proposal for a three-bedroom home at 1778 Columbia Rd. after hearing complaints from the City Point Neighborhood Association and elected officials that the modern style of the proposed structure could set a precedent that would lead to the gradual erosion of the three-deckers that now line the street, across from the yacht club.

The building would not have violated any Boston zoning regulations related to buildings in general, but needed board approval because of its location in a "greenbelt" district.

The board voted 6-1 to reject the proposal without prejudice, which means that Kyle and David Gambone can come back with revised plans.

Board member Eric Robinson was the project's sole supporter. Noting that aside from the greenbelt issue, the building could go up without board approval, he said design issues could be handled through review by BPDA designers, as is standard with many projects approved by the board. "Aesthetics are subjective. Things are built of their time. We don't build like that any more."

Any idea what the Columbia Rd house was going to look like?

Beauty is in the eye of the beholder

That said—— I DIG IT

I've added the actual rendering from the 1778 Columbia Rd. submission to the original post.

I mean.. it *does* look like a triple decker. 3 stories, front porches, big front window.

Its just a box instead.

tbh reminds me of a building I'd see Robocop or Back to the Future II . A camera shot of a street of normal residential we see today, and then this futuristic building all lit up between two of them.

I'm sure their sainted triple deckers never caused such a fuss with the blue blooded yankees who hated their tenants. Oh no.

What is that ? Really ? Its a house is South Boston ?
I think who ever built that thinks that they're in California ...

A fatter stack in Maisie’s pie box it seems.

That stretch of Columbia Road, has magnificent homes, which are all designed to complement each other. It is arguably one of the nicest locations in the US. Immediately adjacent to this site are three center-entrance double bow threes, and the famous home of Judge Day, for whom the Boulevard is named. Any architect who would do the bidding of a selfish developer, inserting a building out of character into that context, should be ashamed. Eric Robinson is an accomplished architect himself, and a decent guy, but the BPDA Design Review team cannot be entrusted with any decision about that site. This is a rare case where the facade of the house next door should be cloned.

Also known as Gdansk On Old Harbor. To me the most out of place building in all of Boston and one of its ugliest as much as it has been painted to soften that Soviet monster that it is.

Let's not get to high faluttin' about the architectural treasure that is Columbia Road. There are some glaring examples of crap.

A friend of mine used to live

A friend of mine used to live there. It is a monster.

So because one monstrosity go

So because one monstrosity go by we should allow more? That makes no sense.

It looks like a triple decker with modern porches.

Your typical triple decker is just a stack of three trailers anyway, right down to the shotgun layout and odious masonite paneling everywhere. From my son's apartment searches, I hear that the top trailer is a penthouse now. HOOO WEEE! Certainly doesn't help these high rise trailer park NIMBYs get over themselves. 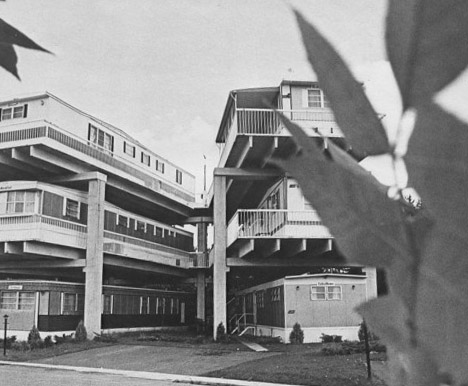 That pic tho.. interesting concept.

You could have a home to your layout and liking. Just bring it along...

Carson Towers aka the Highrise

was a monstrosity built by contributors to a former Mayor under the ruse that it was public housing only to be transformed into a privately owned rental property years later. For all those who want dense development, do you think this is nice? Did it lower the cost of property in Boston?

It’s not even one of the

It’s not even one of the nicest locations in Boston let alone the whole country.

" one of the nicest locations in the US"

Get out of Southie once in a while, Murph. There's a whole world of much more attractive neighborhoods out there!

"It is arguably one of the nicest locations in the US."

If by arguing you mean everybody pointing at you while they fall over pissing themselves laughing, then yeah, arguably.

So beautiful. Clone that facade!

The board needs to look at City Hall

Its a monstrosity and hurts peoples eyes when they look at it.
This house looks fine in my opinion., much nicer than plain triple deckers

To keep one style because that’s what’s been done is backward. If we’re going to say what gets built historically, I choose the year the triple-deckers went up. Make them all have a Queen Anne turret and the all the finials and ornament they came with - or we have to rip them all down. No exceptions. Watch them ALL come down because of an arbitrary decision of Sameness.

Really cool building, btw. It’s like any coastal building should be.

Why do we hold sacred the hastily built forms of only 120 years ago?

Why should the zoning board

Why should the zoning board have any power to use "loud parties" as a factor in the decision? Zoning concerns the property, not the current residents.

for being an A-hole. There are consequences. If you don't like it, go back to the uncharted territories outside 128.

A moment of silence for "Old

A moment of silence for "Old Southie" please.

Broken Coconut, broken promises: The cases against Aaron Sells
Putting the 'sea' in Seaport photos
Final tally in that South Boston condo: Remains of four infants recovered
Out of control Gen Zers and teens recklessly careening down the streets of South Boston in Stop and Shop carriages, outraged councilors say
Additional human remains may have been found at South Boston house where a dead baby was found in a freezer yesterday
Fetus or body of young infant found in South Boston freezer