Changing of the guard: Seaport building that went up as an insurance-company headquarters to be retrofitted for life sciences 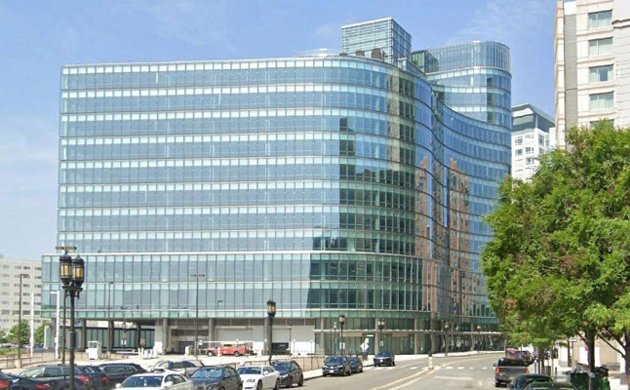 601 Congress St. From the BioMed filing.

A Kendall Square concern has filed plans with the BPDA to retrofit the curvy 14-story building at 601 Congress St., originally built as the US headquarters of a Canadian insurance company, as lab and office space for the red-hot life-sciences market in Boston.

BioMed Realty bought the building in December from John Hancock, which is what Manulife of Toronto renamed itself after buying the better known Boston-based insurer. Manulife originally commissioned the Congress Street building in 2003, then bought John Hancock, which made the building its new US headquarters after abandoning its eponymous tower in the Back Bay. Two years ago, John Hancock consolidated all of its headquarters staff in another, shorter Back Bay building.

The proposed conversion is the latest example of the current life-sciences land rush in Boston, as developers seek to put up new buildings and, when they can't do that, retrofit existing one to make room for more lab space. But perhaps no project is more symbolic of the growing importance of life sciences in Boston than the conversion of a building from one of Boston previous booming industries - insurance - to a new one.

The building has been vacant since 2018, when John Hancock moved back to the Back Bay.

BioMed's plans call for roughly half the 470,000 square feet of space in the building to be set aside for laboratories, with the rest used for offices that support the labs.

In addition to standard office and so-called ‘dry research’ activities, such sub-uses typically include chemistry, biology, bioinformatics, and sequencing activities. Each tenant will conduct its specific life science use in a space uniquely built out to safely operate such use. Additionally, each tenant will be required to operate its premises in accordance with health and safety regulations of the State Building Code, the National Institutes of Health, and other local, state, and federal agencies, as may be applicable to such tenant’s use. The laboratory space will be limited to Biosafety Levels 1 and 2 (BSL-1, BSL-2) established pursuant to the guidelines of US Department of Health & Human Services.

BSL-1 microorganisms are those that pose little to no threat to people, such as non-pathogenic varieties of E. coli. BSL-2 microorganisms can cause health problems and even death, for example, certain encephalitis viruses, staph bacteria and HIV, and so require more precautions and lab restrictions.

BioMed expects that once the building is fully occupied, it will have up to 1,750 jobs. Also, the ground floor will have space for a restaurant. BioMed is not expecting any changes in parking - it currently has 348 spaces, split between an underground garage and reserved spaces in a nearby Massport garage.

The company hopes to begin 16 months of construction this fall.

Yep the Canadian insurance company sold it in the winter.

In between Hancock and the new incarnation...

...the building was used to film scenes of “I care a lot”.

Worked there five years in the oughts. Nice views, though the seaport was not yet really developed.

Red Line train derails in South Boston yard
It's good to live in a city where you park for a client meeting and some living history goes by
Citizen complaint of the day: Cars getting towed, ticketed for street cleaning even though we were told Bunker Hill Day is a holiday
No kidding: JOKR shutting down
Conley Terminal crash kills man
One worker dead, one injured in latest Boston construction mishap