Another residential complex approved for Readville 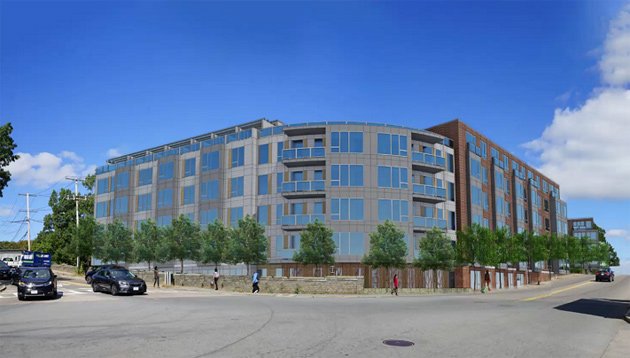 Pre-traffic-light rendering by the Architectural Team.

The Zoning Board of Appeal today approved a 273-unit, two-builiding complex on what is now an unused, sunk-away industrial site on Hyde Park Avenue at the Father Hart Bridge, next to the inbound platform at the Readville commuter-rail station.

Ad Meliora, headquartered downtown, has proposed a two-building complex with one building with 151 condos and the other with 122 apartments. The complex will also have space for a restaurant as well as a 4,400-square foot "pocket park" along Hyde Park Avenue.

An underground garage shared by the two buildings will have 200 spaces, but is large enough that another 100 cars, via a stacking system, could be accommodated if need be.

Both the mayor's office and the office of City Councilor Ricardo Arroyo supported the proposal. Nobody spoke against.

The BPDA board approved the proposal in December.

The complex is the second large residential development proposed for what was once the sleepiest section of the city - last year, the board approved a 247-apartment complex on Sprague Street, just to the south of Readville station.

To me, this development made

To me, this development made a heck of a lot more sense than the Sprague Street project. I'm skeptical that the area can handle both, though. If only we had a city agency that did comprehensive planning, instead of just the BPDA...

If we stopped playing Musical Chairs

With kids in Boston, this area could handle more than both of these projects.

Also, once Amazon builds it massive warehouse in Widett Cr, maybe the Amazon traffic around this site would slow.

HOpefully they allow Amazon to build

Trying to build an "innovative, affordable neighborhood "in Widdet Circle is absolutely ridiculous and an insult to working people. Give the people work

I live at the end of HP Ave

I live at the end of HP Ave around the corner and look forward to the development going on in Wolcott Square. It needs it!

Ricardo Arroyo is quietly the best councilor on housing issues. He understands the interplay between adding more supply to prevent displacement and meet high demand, while also fighting for tenant protections. He's a major improvement over his predecessor who NIMBY'd everything in Hyde Park and voted against tenant protections.

I remember talking to a fellow parent at school and they were legit talking wistfully about how hard their friend Timmy had it as councilor and how he wasn't valued by the voters. Some real pity party stuff. I politely moved on to different topics when they started talking about how Timmy was thinking of moving to his second home in Hull full time.

How do rents and condo prices

How do rents and condo prices under affordability guidelines based on citywide median incomes compare with market rents/prices in the Readville area? I suspect there's not that much difference (not that this a bad thing).

Good question, but, a correction

The BPDA doesn't use citywide rents and prices - it uses rents and prices for the entire Boston area, as determined yearly by HUD, which some have argued means Boston "affordable" units actually aren't for many people, since the median is boosted by values in places such as Newton and Brookline.

That is massive. Nice to see new development on that part of HP Ave though

Anyone know when and if a traffic study is planned for this area? That is really needed. I am in favor of development in this area as there is so much underutilized real estate along Hp Ave on readville but it should be accompanied by larger scale planning.