Rendering by Prellwitz Chilinski Associates of the view from across Linden Street.

The Zoning Board of Appeal yesterday approved plans by the owner of the Linden Street block that houses the Garage nightclub with a three-building complex with 349 tiny apartments, including some lofts set aside for artists.

The Allston Green plan by Partners Properties also includes tearing down several houses along Pratt Street and calls for roughly half an acre of public space on the currently densely packed Linden Street. The complex is across the street from part of City Realty's four-building re-do of the intersection of Harvard and Cambridge streets and just up Pratt from the 17-story apartment building City Realty has proposed. 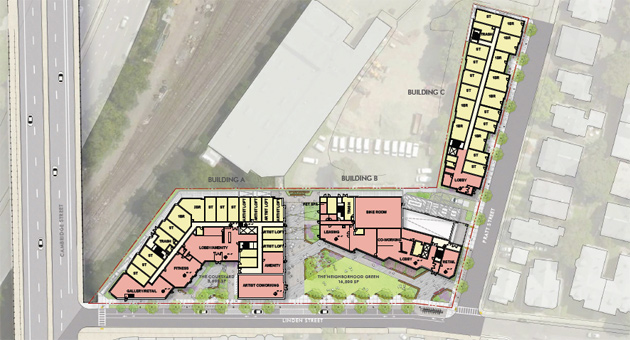 Partners won approval to build under the city's "compact living" pilot, which seeks to increase the number of units normal people can afford by letting developers build apartments smaller than normally allowed

Plans call for 186 studios, 116 one-bedroom units and 41 two-bedroom units. Some 53 of the units will be rented as affordable, including six loft spaces set aside for working artists. The artists will have a gallery and co-working space.

Partners attorney Johanna Schneider said the company, which will also manage the building once it's completed, has agreed not to rent to students - in an area of Allston that is saturated with them.

She said that in addition to asking would-be renters if they are students, and rejecting those who answer honestly, rental agents will also bar anybody who needs a co-signer for a lease, just in case some sneaky students lie about being students but need mom or dad's help making the rent. Also prohibited: Apartment subletting.

A skeptical board chairwoman Christine Araujo asked Anabela Gomes, president of the Brighton-Allston Improvement Association, if she had heard any complaints about students at Partners' building at 1505 Commonwealth Ave. Gomes said she had heard no complaints from association members, including some who live in that building, who have said the building is "very well maintained" and "very quiet." 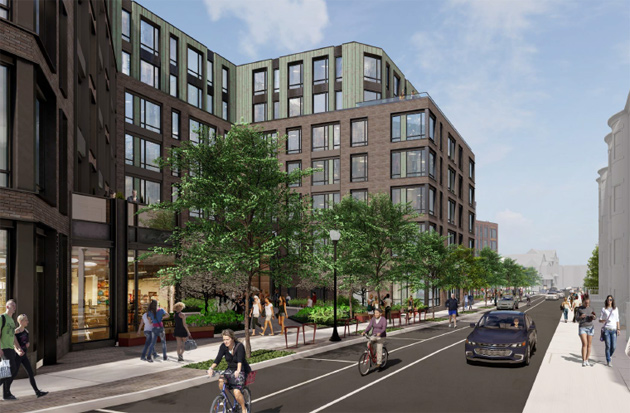 Board members also expressed concerns about the way Partners proposed to comply with the "compact living" standards, which require developers to provide extra "amenity" or common space for residents in exchange for their smaller units.

After Schneider said Covid-19 had caused the development team to re-think the layout of some of the spaces to allow for more spaced out communal activities, Araujo said she was concerned that some of the units might still be too small. Referring to some of the studio apartments, she asked, "And in the age of Covid you did not look at the mental health being stuck in a 352-square-foot space?" Schneider said only two studios were actually that small, and besides, somebody feeling crammed in could always go outside to the new park space the complex will have. She did not say what this hypothetical resident would do in the winter or during a storm.

Board member Eric Robinson, an architect, criticized the fact that of roughly 10,000 square feet of communal space, some 1,900 square feet consisted of the lobby of one of the buildings. That's "not in the spirit of communal space," because lobbies are not usually the sort of place where people would get together to do anything, except leave. Schneider said Partners would re-examine the use of space.

The Partners complex will have 125 parking spaces.

The mayor's office and the offices of City Councilors Liz Breadon, Annissa Essaibi George and Michael Flaherty supported the project.

Despite the concerns, the board voted 6-1 to approve the plans. Member Kosta Ligris cast the lone opposing vote.

The BPDA board approved the plans in December.

The largest current building on the site, on Linden Street, went up as an industrial building in 1940, before being converted to office use. It eventually became home to the Russian Benevolent Society - managed by Alex Matov, one of the partners in Partners - which gradually morphed into Garage and the Crystal Restaurant.

The view down Pratt Street: 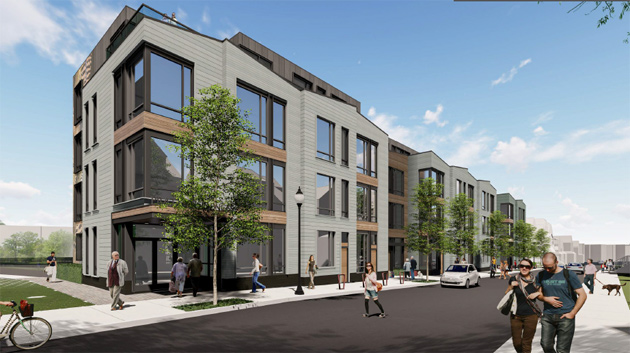 The view from across Cambridge Street. The old Jack Young building, part of City Realty's project, is on the right: 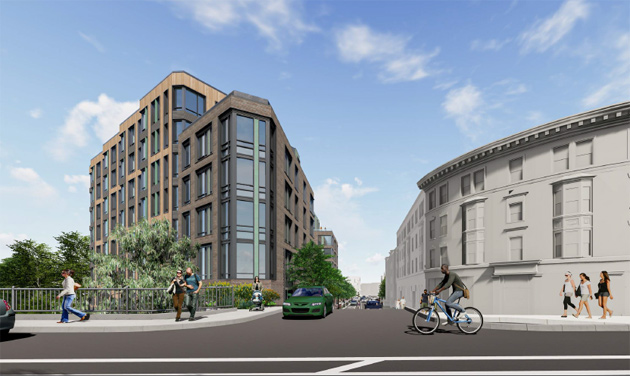 Be careful not to discriminate

Is it legal to discriminate against students in housing? Yes.

Is it advisable? Maybe not so much. If you make any exception then you could run afoul of fair housing laws.

The cosigner thing is more concerning to me. Plenty of rich white students have good credit that their parents established for them, but a lot of perfectly stable employed people of color and/or with disabilities don't have sufficient credit.

Cosignors have to also have

Cosignors have to also have good credit and the income to support the full rent in addition to whatever obligations they already have. Cosigning is the realm of the upper middle class (which does tend to be white) so restricting it actually has little impact on the poorer working class.

My experience is that nobody who ISN'T a student has any business living anywhere within a 5 minute walk from the GAP. I'm normally pretty YIMBY, but if we're adding supply let's add it to meet the existing local demand, not to hamfistedly try to shift the neighborhood demo.

This is stupid. The big

This is stupid. The big issue with housing affordability here is students tripling or quadrupling up in larger housing making it too expensive for families to live here, making the whole area one big dorm community. This does nothing to alleviate that and the ZBA shouldn't have approved it with that provision.

I'd like to see the city move to make education enrollment a protected class. It is VERY common for larger apartment developments to exclude undergrad students forcing them into the older and larger housing stock that exists in the neighborhoods.

not just students tripling and quadrupling up in larger housing, but all 20 and 30-somethings because of these types of requirements.

I've lived in both

I've lived in complexes that allow students, and a development that excluded students.

My first-hand experience is that, students are typically much louder than workers/families during the week, especially Thursday nights. I certainly didn't miss the thumping base lines at 1AM when I moved into an undergrad excluded building.

And while there were rules against noise beyond 10PM, good luck evicting someone quickly, or enforcing it easily.

I also don't blame a student for partying on a Thursday night - I certainly did. But I also didn't live where my neighbors were those going to work the following morning, or had sleeping kids with school bright and early.

It's just two different types of renters that need to be accommodated for.

Why party on Thursdays?

Aversion to and reduction of Friday classes in general.

It's been a thing for a long long time

In fact, one of the privileges of being an upperclassman was that you weren't forced into 8 am Friday classes to meet requirements for your major.

I'm not sure exactly what your experience is, but mine is quite different. I've lived in the GAP neighborhood since my parents bought our house in 1958. I can think of at least a dozen households on Ashford, Hartley, Wadsworth, and Pratt that range from families with children to elderly folks. The perceived "knowledge" about who lives in this neighborhood is inaccurate, to say the least.

The only people I know in that neighborhood are immigrant families from Central America.

My experience on Wadsworth & Linden long ago backs you up, Allstonian. It may have changed drastically since, but for a long time, that stretch next to the CSX yard was at least 2/3 families, recent immigrants (mostly from Latin America or eastern Europe in the 90s-early aughts), and young working people sharing houses & flats. Yes, there were students, but Brighton Ave to Comm Ave seemed to be more desirable for students. Hard to imagine that all of the long term owner-occupied places have flipped since.

"We need micro unis so theyre

"But not TOO affordable"

probably all homeowners trying to "improve" the neighborhood for their home values and don't want the poors living close to them while not realizing a move like this is gonna force out all young people who were planning on having families here. and then they're gonna complain there were no families here like...well yea no duh who can afford it-- this is THEIR fault.

Yeah, that's one of the

Yeah, that's one of the problems with affordable housing: we have a long history of making policies to keep poor people out of neighborhoods because of the problems they supposedly cause. That's why we have all this restrictive zoning (setbacks! floor area ratio limits! minimum area per dwelling unit! parking minimums! single family houses only!), which makes housing so expensive and difficult to build.

This project seeks to discriminate on occupation rather than just income. Maybe this scheme will work at reducing supposed problems in the community, but the main thing it has to do is convince the city to approve it so the developer can make their money and move on to the next project.

"And in the age of Covid you did not look at the mental health being stuck in a 352-square-foot space?"

Wait, what? Number 1, 352 sq ft is not small for a person living alone. Number 2, folks can go outside. Number 3, the "age of Covid" is temporary -- we should build housing that will last 50-150 years based around a pandemic that impacted us for 18 months over the past 100 years?

Who really wants to live in a 352-square-foot studio other than a student?

None of this makes sense to me.

So sad to see the Jack Young bldg go! My father, his father, and several members of my family worked there for YEARS. My grandparents even lived upstairs from the company when my father was growing up. The end of an era in Allston!

Edit: I guess I didn’t look at this long enough. Jack Young bldg is grayed out in photo and is still standing.. for now. Hahaha!!

Yeah, the JY building is safe, at least according to last year's plans. https://www.universalhub.com/2020/board-approves-six-building-project-wi...

Thanks for the link!

I would think a pro-density

I would think a pro-density residential building in an urban student neighborhood would be pro-student... guess not for this development though. How strange.

that last rendering is really giving the building across the street from this development a glow up. no graffiti, no piles of broken glass and/or vomit?

The bumper sticker for anybody who's ever driven on a river road and not storrowed
With his 80th birthday approaching, owner of Allston's Silhouette Lounge to retire; new owner vows to keep the place the same
State says it will rebuild Allston highway loop at ground level
Driver crashes into the right place in Allston
Journalism and PR truism: Hire the people with the dirtiest minds to review your copy before it's printed
Billion-dollar Harvard science center in Allston gets first students