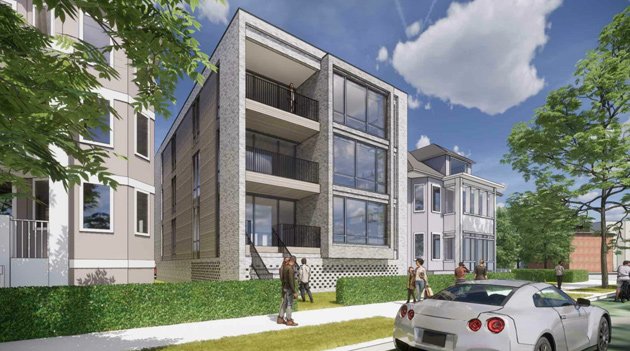 A developer says the Zoning Board of Appeals illegally rejected a proposed three-family house at 1778 Columbia Rd. that would have looked completely different from its neighbors but which met all of the area's zoning requirements.

The project was before the zoning board because its location, across the street from the water, is in a "greenbelt" district designed to protect certain tree-lined roads, which requires "conditional" approval from the board for projects of its size. In its suit, filed yesterday in Suffolk Superior Court, Platt Development Group of South Boston says this means the board could have set conditions on the project, but not reject it outright.

Platt, owned by Kyle and David Gambone, says the board knew this because its attorney at the hearing reminded them at the outset of the hearing about a 2002 case in which the Massachusetts Appeals Court said the Boston zoning board could not reject a proposal for a house in a greenbelt district if it otherwise met zoning requirements, only set conditions.

The board rejected Platt's project without prejudice, which meant it could come back with a new proposal within a year.

Platt said the board acted after hearing one resident object to the house's style, which she said would lead to the gradual elimination of the triple deckers that now line the street. In the complaint, Platt dismissed her as somebody who, "with zero architectural or design credentials, made criticisms subjectively based on the modern design of the proposed building."

The site isn't in a historic district, so the board should not have accepted her statement as the final word, the company argues, adding that the one architect on the zoning board, Eric Robinson, was the sole member to vote in favor of the proposal, after saying that triple deckers are of another time: "Aesthetics are subjective. Things are built of their time. We don't build like that any more."

The woman in question, Luanne O'Connor, is chairwoman of the City Point Neighborhood Association, which collected some 130 signatures on a petition opposed to the proposal, mainly because of its effect on the character of the street, but also because it includes a roof deck. The Mayor's Office of Neighborhood Services also opposed the project at the hearing, because of its potential impact on "the character of the surrounding neighborhood and streets."

The BPDA, to which approved projects are typically assigned for "design review" after board approval, did not take a position, saying it didn't get details of the proposal before the hearing, but a BPDA planner who attends zoning-board hearings, told the board before its vote that based on community opposition, the proposal would likely need "extensive" design review should it be approved.

Maybe if they use wood siding

Maybe if they use wood siding as opposed to what looks like stone in the picture people wouldn’t be so terrified of the deezine?

This must be your first rodeo....

My experience is that even with wood siding, these types will simply find a new reason to oppose the new structure. The main issue is never what's said... because it comes off as.... let's say, ridiculous?

Please explain what that means.

Maybe if we had a Zoning Board

that wasn't so quick to reject proposals based on totally subjective criteria, like aesthetics for one, that have nothing to do with the established zoning regulations.

Might just be me... but this totally resembles a modern take on a triple decker, and honestly still looks more similar to a traditional triple decker than not (3 stories high, front gable window next to porch). Why are roof decks a problem?

Why are roof decks a problem?

I really don't know -- but I could imagine a roof deck party being louder for neighbors than a backyard BBQ. Again, I don't know if it's true, but a backyard is hemmed in by the homes and foliage in a way that perhaps roof parties aren't.

I personally think roof decks are overrated -- they ultimately aren't used that often, are hard to bring food and drink to in practice, etc. I'd rather they pop solar PV up there. On the other hand, urban areas don't have much outdoor space, so it makes sense to make use of what is available.

U will never know the problem with roof decks until u live next to one. I’m not the party police but when u have 30 kids drinking & throwing cans of beer onto your property then it becomes a problem.they usually start on Thursday and goes until Sunday late nights with the music going nice and loud, drunks screaming. who wants to live next to that. They are usually rentals so u r dealing with the next group of new renters once the previous lease expires. It’s a bad cycle

They wouldn't throw it over the fence from the yard?

And how, exactly, is that a

And how, exactly, is that a zoning problem?

English can be challenging.

I believe the word you’re struggling with is “you”. Second person pronoun. “U” is Dutch.

It's been an issue in South Boston and the South End for awhile now. You know how those party animals get.

In fact, the same day the board rejected the proposal it's now getting sued over, it also rejected a deck proposed for a house on Dorchester Street.

On a South End street full of roof decks, controversy explodes when one building owner wants to build a roof deck

I've seem you report on this

I've seem you report on this before, and appreciate it. That said, it seems so absurd that the ZBA can turn down permits based on the potential for an end user to be noisy. I'm not an expert but it seems to me, the taxpaying layperson, that really shouldn't be a consideration. Our city has a huge housing problem. Build the damn units.

is so incredibly NIMBY-driven and anti-fun that it drives me up a wall. South Boston feels so much more alive and active because of the roof decks.

Institute some curfew and adequate noise complaint responses. Instead of banning people from capitalizing on one of the best assets on a piece of property.

There should be countless roof-top restaurants and amenities around Boston like most major cities, but there's barely a handful today. Nope. No fun. Keep quiet. In bed by 10pm. Boring.

Do you own a home there?

It's so God forsaken but everybody wants to come here. It's a residential section of the city. You're free to party all night, as long as you keep it in your own home. Many renters are not currently doing that. They were raised by parents who never told them no or how to respect others. "Anti fun"? So you can't have fun without a roof deck? Sucks to be you I guess.

I agree. Years ago I was

I agree. Years ago I was thrilled to move into a building that had a roof deck. I walked up there exactly once, and didn’t stay. Nobody else ever used it either.

Are you serious, why are roof decks a problem? I’m going to guess that either you don’t live here, just moved here and/or are young and trying to have a whole lot of fun! Here’s the thing with those of us who have lived here our entire lives, we’re sick of roof decks and all the drama that come with them!! We’ve got children, older parents who like to go to bed at a reasonable hour and don’t need to be tormented or bullied by the newcomers who’ve invaded our town!! The disrespect I’ve witnessed firsthand and the destruction of property by the people who love to drink on their “awesome deck”, is disgusting!!! We are sick of it and we’re putting a stop to it, be prepared because we’re coming for all of the trouble makers! If this isn’t you, you can just tell your friends!! Soo, if you’ve got friends who are thinking of moving here; tell them not to because change is a coming!!!

Is that a Skyline parked out

Is that a Skyline parked out front?

It's trying to be. Probably

It's trying to be. Probably stolen from GTA... Looks like one but proportions are off.

In this city, you cannot be

In this city, you cannot be better than rest. Be it in school or architecture.

make it less ugly so it appeals to the neighbors. Boston’s lack of architectural colleges in the past is coming back to haunt us.

I mean, there's one named for the city it's in. How many do we need?

I'm fairly certain that was a joke

Myself, I refer to MIT as a design school that has an engineering program affiliated with it.

This looks very similar, but modern, to all those triple-stacked trailers known as "triple deckers" that are all over this neighborhood already.

It really does often seem

It really does seem like the members of these zoning and planning related boards and commissions often do not recognize what legal authority they do and do not have. I have been in far too many meetings where it seems like they're just winging it and making decisions based on their own personal opinions and not in response to specific laws or regulations.

I love my building’s roof deck.

Not least because hardly anyone ever uses it, except my household. I grew some delicious Sungold tomatos a few years ago up there for grazing. Catnip for the cat. Great place to dry bed linens. The sunlight kills dust mites that electric dryers cannot.

Just more of the Quincy

Excel High student, mom arrested trying to battle their way into school to attack another student, DA says
Man charged for role in homophobic stomping at Andrew station
People stumbling out of the Andrew T stop late at night with a hunger for pizza will have to go home and order from there, board says
Judge says owner of ill-fated boat can continue to make his case that he wasn't to blame for Boston Harbor crash that led to one passenger's death
Life isn't so good when you've got a patent troll on your back, Fort Point clothing company says
Citizen complaint of the day: Boobs on display in South Boston