Once, kosher restaurants weren't that uncommon in parts of Boston 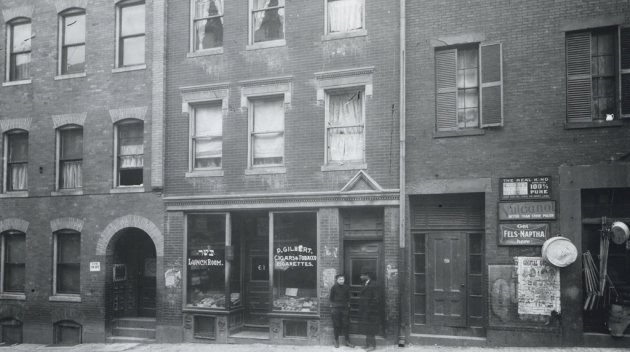 Neighborhoods:
Boston
Topics:
History
Ad:
Like the job UHub is doing? Consider a contribution. Thanks!

What is up with the no step?

It's just large and uneven.

Why, do you like your kneecaps being intact or something?

Phillips Street, Back of Beacon Hill

Considered the West End at the time of this photo.

How many retail spaces on

How many retail spaces on Beacon Hill and similar neighborhoods have we lost? Are they gone forever due to zoning?

There are still a good number used for "retail", although it keeps dropping. The place at the corner of South Russell and Myrtle just converted to an apartment. There just aren't that many uses for these spaces anymore. Dry cleaners don't get the activity they may have had 20 years ago. Anyone that opens a "gym" space - like the corner of Phillips and Anderson - is always looking for something larger.

That's what it made me think of, also.

This is Phillips St. on

That looks to be Phillips Street on Beacon Hill, right up the street from the Vilna Shul.

The West End comes to mind as

The West End comes to mind as a Jewish tenement neighborhood. Unless it's a trick question and it's the North or South End.

Today the only kosher restaurant in Boston (as opposed to Brookline) is the Milk Street Cafe. They closed for several months, but they're reopening August 16th!

You submitted yours first and it showed up when my page refreshed. Good work!

I found it unusually fast...

Another easy one, Kenmore

Another easy one, Kenmore Square about 1924. Me and pop pop used to visit it all the time

Block and a half from the Vilna Shul, which opened in 1919, but there were other older shuls in the neighborhood (but maybe not in Beacon Hill?), who knows. Well, other than UHub commenters and the City Archives.

Of course Phillips St used to be considered part of the West End before they tore down the northern part of it.

I used to give informal tours around the city and I stopped in front of Vina Shul (and this is around 1999) there were two guys in their 80s who used to live in the West End and they hadn't seen each other in like 70 years. They talked about (as I recall) how there used to be more synagogues in the area.

Excellent sleuthing by the other members of the UHub network! Yes, it's definitely Phillips Street, just west of the corner of Grove.

Look carefully at the original photo and the Google Street View. The building at right, number 59 Phillips, with the Fels Naptha ad, has changed. It's not the same building.

During that same time interval, the Beacon Hill Tunnel -- the Red Line -- was built. It opened in 1912 and, according to the Bromley atlases, it passes directly beneath this site, 59 and 61 Phillips Street. And the tunnel portal is just a short distance away, on Lindall Place behind number 67 Phillips.

I'm guessing that either one of two things occurred:

One, the corner plot (59 Phillips) was acquired for subway construction, the older building removed, and the current one was built after the tunnel was complete.

Or two, the tunnel construction may have caused structural damage to the building, resulting in its removal and replacement.

Either one seems likely, although it's also possible that the building owners simply wanted to replace a smaller, older building with a bigger, newer one. Since the old building on the site was "3-1/2" stories, that means it had a peaked roof and quite likely dated from the first half of the 1800s. By the 1910s, most of those older buildings in this neighborhood had already been replaced.

PS - Anyone know where I can get some Vulcanol today? Better than stove polish!

Thanks for playing, folks! 59-63 Phillips Street is the correct answer. This photo was taken sometime in January of 1909. You can see the whole photo and zoom in here: https://cityofboston.access.preservica.com/uncategorized/IO_c6f3cbcb-b0b...