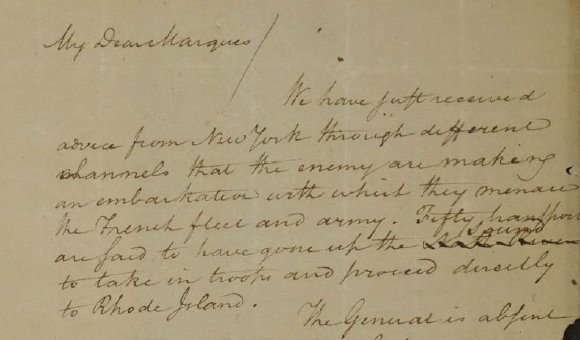 A federal appeals court ruled yesterday that a South Carolina family that had long owned a letter from Alexander Hamilton to the Marquis de Lafayette about the military situation in Rhode Island in 1780 has no rights to the missive and that it needs to be returned to the Massachusetts state archives, from which it had been stolen more than seven decades ago.

The decision by the US Court of Appeals for the First Circuit in Boston upholds a similar ruling by a federal judge last November.

The letter, which urged Lafayette to bolster his forces in Rhode Island because British troops had boarded ships in New York and were headed towards Rhode Island, surfaced in 2018 when Stewart Crane, whose grandfather had obtained the letter in the 1940s, hired a Virginia auction house to sell it and other items. The auction house checked its provenance, discovered it was listed by the Massachusetts archives, and notified the FBI, which promptly seized it. Several months later, the US Attorney's office in Boston sued to have the letter returned to the state archives on Columbia Point.

The reason Massachusetts first came into possession of the letter is because Lafayette shared it with Massachusetts General William Heath, who forwarded it to Boston, where revolutionary leaders dispatched troops to add to Lafayette's forces.

The Crane estate put forward several arguments why it should get the letter back. Perhaps, they argued, the letter had been "alienated" from Massachusetts because the state hadn't wanted it and so either sold it or basically put it out in the trash, but in any case, it was no longer a "public record" subject to state retention. But even if, as Massachusetts claimed, the letter had been stolen, the legal "doctrine of laches" applied: The state had waited so long to try to recover the letter, it was now too late for them to seriously ask for it back. And, just in case the judges didn't like those arguments, the family argued that, at the least, it was an "innocent owner" that had bought the letter from a legitimate dealer and so were owed something for their troubles.

No, no and no, the court concluded.

The court did not try to settle the issue of how the letter left Massachusetts - whether it was actually stolen by Harold Perry, whom the court described as "a kleptomaniacal cataloguer," who stole numerous historical documents during his time at the archives between 1938 and 1945 or 1946 or whether careless state officials simply let the letter go - after concluding the answer doesn't matter. The court said a state public-records law, passed in 1897, specifically declared all documents in the state's possession that were published before 1800 were forever to be kept in state custody as "historic public documents," and that the law did not give the state the ability to sell off or otherwise "alienate" such documents.

Given the explicit language of the 1897 Act, there is no reasonable basis to question that the Letter qualifies as an historic public record. It is an "original paper" and it "bear[s] a date earlier than the year eighteen hundred." It was transmitted to the President of the Massachusetts Council as an attachment to a letter by Massachusetts General William Heath (which is still in the possession of the Archives), and it dealt with a matter of public concern. Furthermore, the Letter's unchallenged provenance makes it pellucid that it was part of "the files of the Commonwealth," was retained by the Commonwealth in the normal course of record-keeping, and was stored in the Archives. To cinch the matter, the Letter remained there until at least the 1920s, as evidenced (without contradiction) by two different nineteenth-century indices, the 1920s index, and the existing photostatic copy.

The estate won no fans on the bench by arguing that the word "shall" in the law (as in the state "shall" preserve such records) might actually mean "may."

The Estate has made no effort to show why the normal meaning of shall should not control in this instance. Taking into account the strong policy interest in maintaining historic public records for posterity, we believe that the ordinary meaning of "shall" is what the Massachusetts legislature intended in crafting [the public-records law] and its precursors.

Further, the state did not suddenly open its bureaucratic eyes when it learned the letter was up for sale and ask for the letter. The state first learned of Perry's perfidy in the 1950s and publicized the purloined Hamilton letter in 1961.

As for the laches, or time-passed, argument, the court also said: Nah. To start, the principle generally only applies to private parties, there is no time limit on governments seeking to "enforce a public right or to protect a public interest."

Such a bar to the use of laches against a sovereign is particularly apt in the context of historic public records held in trust for future generations, and we hold that the bar applies here.

Topics:
History
Free tagging:
Lawsuits
Ad:
Like the job UHub is doing? Consider a contribution. Thanks!

The estate really went all out

However I think they would have stood a better chance of a decision in their favor had they cited the precedent of Finders v. Weepers.