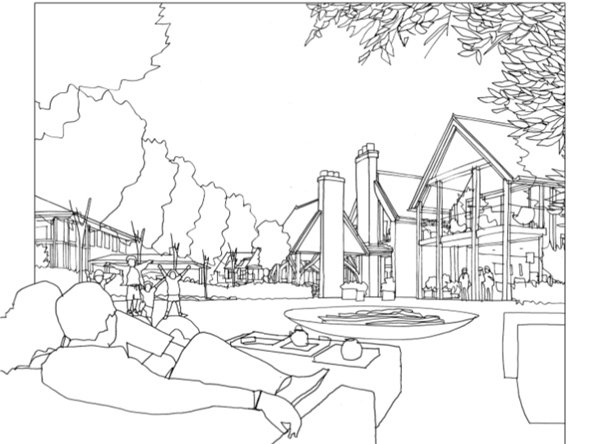 Developers have filed plans with the BPDA for a 36-unit condo project on a 12-acre parcel at the end of Rockwood Street at the Brookline line.

The units will be built in a mix of duplexes and three-unit structures along a new internal drive in what will become Rockwood Manor. The site's existing mansion will initially serve as a sales and marketing office for the development, "with the potential for future use as event space for residents and local neighborhood groups."

The units would range in size from 2,000 to 3,500 square feet, under the plans by developers Matt Zuker, Ken Chase and Armando Petruzziello of Needham.

The main access to the site would be through Avon Street, at what is now the back end of the land, rather than via Rockwood Street, because Avon is wider and has better sight lines than the curvy part of Rockwood that ends at the property.

About 4.6 acres of the site will be set aside as open space and to provide a buffer between the new buildings and the surrounding neighborhood.

In their filing, the developers say Boston has a pressing need for low-density luxury housing:

The Proposal fits the need in the City of Boston, and the Jamaica Plain neighborhood, for the type of high-quality housing stock that both existing and future residents' desire. The introduction of a new swath of single-family housing will help alleviate the burden on the existing housing stock in this community and throughout the City. The high quality and thoroughness of design and construction methods will concurrently fit the character of the existing neighborhood while enhancing the aesthetics of the neighborhood as a whole. ...

The Proponent maintains that the townhome and flats layout with the associated road, as opposed to a large scale multi-unit housing complex, is a more appropriate scale and scope proposal and will behoove the existing community and the City of Boston. The design of the Proposed Project was completed with the bucolic nature of the site and residential nature of nearby Moss Hill section of Jamaica Plain in mind.

The developers say they have neighbors in mind - they scaled back their original plans from 48 units to 36 and agreed to work within the land's current zoning, rather than seeking a "planned development area" designation, which would have let them and the BPDA throw out the zoning and negotiate simply on the developers' proposal. they add they will also comply with Boston's requirement for affordable housing - likely by partnering with "a non-profit developer, land trust, housing authority, or other entity" to build affordable housing nearby.

I don’t really understand this development

It’s missing middle housing but at a bizarre scale and obviously targeted at rich people. Each unit is like 2-3 times the size of most duplexes, triple-decker, and townhouse units in Boston. Saying you’re building “Luxury low-density housing” just 5 miles from downtown Boston is kinda laughable, but the location is a weird place and literally anything would be denser than the massive mansion that’s there now. Awful transit access, over a mile from any bus line that comes more than once every half hour at the best of times. But you can be downtown in half an hour by bike. Regardless, this place is destined to have a parking ratio of like 3:1.

If this is what’s gonna go there, a bit frustrating that they dropped the number of units by 25%, so they don’t have to deal with bureaucracy. Also silly to skirt around affordable requirements by just saying, “yea we’ll probably build some apartments somewhere else.” Couldn’t have lower income-folks in your “bucolic” paradise apparently.

This should be fun to watch

In their filing, the developers say Boston has a pressing need for low-density luxury housing.

I think you’ve mis-read the room.

Not too sure if "low density luxury housing" is something we should be building right now, but since its next to Larz Anderson and Brookline... ehhhhh maybe.

I feel sorry for the neighbors, seems like there's not a ton of space and they are going to add 20+ units.

Also, this is the first rendering looks like a color by numbers drawing.

I don't understand. Not a ton of space? It's on 12 acres and there's a bunch of greenspace buffered around anything remotely close to neighbors to the south. 36 units in this suburban area will be barely a blip on any traffic effects (you can see this in the detailed traffic analysis they provided).

On the map it doesn't look like alot of space. There certainly wouldn't be many trees left.

but whateves. Like I said, its over in the 'woods' of Boston so it kinda fits (vs an Avalon Bay style complex)

Oh no, the neighbors

Here is an example of doing it wrong. We needn't build 50's style suburbia within city limits and exacerbate our current problems.

That looks like a giant plate of bacon in the middle, and the kids are celebrating it.

They are celebrating the arrival of the Overlords

to whom the Great Plate of Bacon is an offering.

And the adults are ceremonially cultivating slack.

Shows the site plan. They're keeping the Large 'Manor' house (Rockwood Manor) as a clubhouse.

It appears they are trying to keep as many trees as they can, with a new road between Avon and Rockwood Sts. Some will inevitably be lost to the construction work, but it's possible to keep a lot, I would think.

I WONDERED what was going on over there

I ride by this place all the time. There is an abandoned house on Avon that I'm now guessing will be where the new entrance to this will be. What they plan to build is certainly not "dense" but I will say it's denser than much of that that area is right now.

And fear not, it seems this development will solve all our housing woes. From their letter:


The introduction of a new swath of single-family housing will help alleviate the burden on the existing housing stock in this community and throughout the City.

Some strange behooving goin' on

The developers say that their plan "will behoove the existing community and the City of Boston." This is strange. Usually "behoove" is used as an impersonal verb, with "it" as a quasi-subject: it behooves X to do Y. It's hard to tell what this sentence means; it appears that some other verb must have been intended. It behooves the authors of this statement to clarify their meaning.