Huh, the people running for mayor of Newton sure look familar 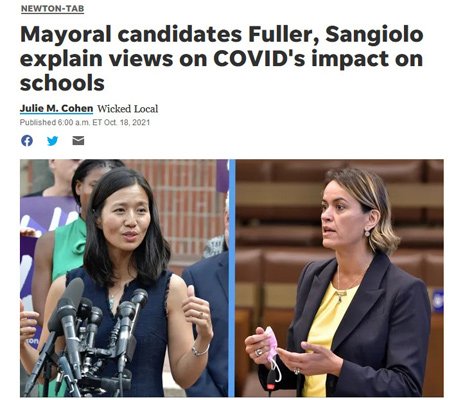 Greg Reibman, who once ran the Wicked Local empire, wrote yesterday that "My heart breaks for the once great Newton TAB" after seeing the photo somebody there placed under a headline about the Newton mayoral race.

The shroud of the dark side

The shroud of the dark side has fallen. Begun the Clone War has.

I will absolutely vote for whichever candidate will move forward to seize Brookline and Newton and absorb them into the city of Boston.

Editors see what they want to see.

Anyone else notice how the Globe's coverage of the Boston election has been 85% focused on AEG?

Today they have yet another background story on her with no equivalent deep coverage of Wu.

I'm a Wu supporter but it's not good for anyone for coverage to be so lopsided.

I did a quick search of Globe

I did a quick search of Globe headlines, trying to screen since mid-September, and tried to class them into "Joint / Horserace Articles", "AEG Focused Articles", and "Wu Focused Articles". Here's the quick breakdown, I'm not sure it supports the idea that coverage is AEG-focused.

Wu seems to slightly outnumber in articles focused on her, but granted a lot of those are duplicate-issue articles on endorsements. They each only have a really small handful of articles really profiling them.

People see what they want to see.

When I crack open my Globe in the morning, I see a paper that is working hard to get Wu elected. The official endorsement will only be a formality.

Then I realize that in fact they are trying to cover both campaigns.

Same thing with this news source.

In other Newton news

Newton mayor says six employees were fired or quit over vaccine mandate, all the rest are now vaccinated or granted exemptions
Indiana murder suspect nabbed at 128 rest stop
Boston-area highways turn into slip 'n' slides in light snow; expect more of the same through tomorrow
Once sprawling Finagle A Bagel now down to just two outlets
Think Boston politics are nuts? We have nothing on Newton
Newton transformer suffers meltdown, takes local power grid down with it