Developer hopes to revamp Mass and Cass with life-sciences building 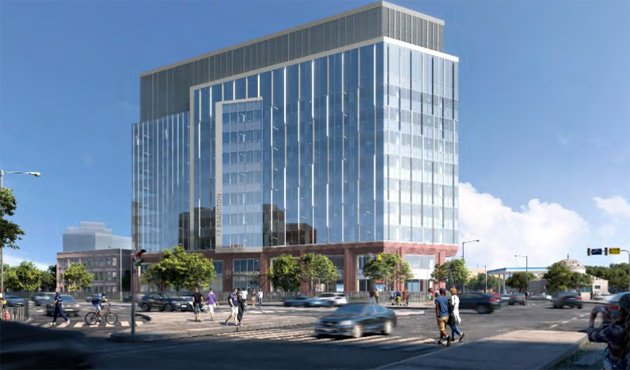 City Realty this week filed its formal plans for an 11-story, $207-million life-sciences building at 17 Bradston St., at the intersection of Massachusetts Avenue and Melnea Cass Boulevard.

In addition to being at the epicenter of the city's opioid and homelessness crisis, the 1.1-acre site is also within walking distance of Boston Medical Center, the BU Medical School and BU's biolab research center. It would also be near the new home of the Benjamin Franklin Institute of Technology, with which the company says it is in talks "to create a life science workforce training space" for institute students.

City Realty, which has rapidly grown from being a developer of small apartment buildings to a company working much larger projects, says its goal when "conceptualizing this project""

Was to revitalize the neighborhood by replacing the existing outdated buildings with a new state-of-the-art building that will incorporate best practices in energy efficiency and climate resiliency to tackle the challenges of tomorrow. The building’s welcoming design and public realm improvements will create a welcoming presence at the gateway to the Newmarket neighborhood.

This project embodies economic development, placemaking and social stabilization. Its commercial components will contribute to the existing industrial nature of this area of Boston and its innovative, multi-user designed wrapped in elegant architecture offers a model to flexible workspaces of tomorrow.

The Project is being designed with flexible programming space with a focus on attracting tenants in multiple sectors including healthcare support, offices, pharmaceutical back of house operations, research and development, advanced manufacturing, and local partnerships.

In addition to that space and the Benjamin Franklin space, the building would also have 7,265 square feet of space "targeted at uses which have been identified as at-risk" in the Newmarket area.

The building would replace a three-story office building, a former fast-food restaurant now serving as a church and a parking lot. The new building would have roughly 204 parking spaces in an underground garage.

Just what we need

Not. That's the best we can do in a neighborhood that is Ground Zero for the addiction and unhoused problem we have in Boston?

I understand your mindset,

I understand your mindset, but I think exactly the other way. Mass & Cass was never designed (or should) be a regional tent city. We shouldn't cede a section of Boston to a regional problem.

What's funny to me is that I'll bet that city councilors and neighborhood groups will line-up behind this project, claiming it will "enhance" the neighborhood. Meanwhile, the idea of putting a Total Wine in South Bay--a shopping plaza that is badly in need of good tenants--has these same people screaming like crazy that it shouldn't be allowed (ignoring that there are multiple closer liquor stores to the tent city).

It sounds like you don't like any new buildings that don't meet your very particular specifications and that you in turn expect to extract "community benefit" out of a developer.

It's this kind of mentality that has eroded housing affordability in Boston (and, yes, contributed to homelessness). No thanks. We don't need NIMBYs to hijack our land use.

I read it as asking:

I read it as asking:
Instead of approving yet another biotech building (which are getting proposed and mostly approved all over the area) - and - since it has been okay to dump a dysfunctional, ill-equipped, no-infrastructure, health & safety impairing, open-air, public shitstorm on that area...
...Why not build a building there that can be used to address that ongoing crisis?

Why not add another service here?

Speaking as someone who lives a couple of blocks away: Because we (Newmarket, Lower Roxbury, the South End) do not want it. Few of the people living on the streets and staying in homeless shelters are from this small area, and most are not from Boston, They are here because this city and the suburbs have found it more politically convenient to concentrate all the services in one area far away from them. The more services, the bigger the shit show. Advocate for services in your own area.

I wasn't advocating. I was

I wasn't advocating. I was giving my read of what the original comment was saying.

It does help Mass & Cass

It just doesn't solve the intertwined issues of homelessness and addiction for people on the streets there right now. Nor is that City Realty's job. There are dozens of government agencies and non-profits whose primary function is to help solve these issues.

No doubt there's demand from businesses connected to Boston Medical Center and BU Medical -- from the description it could be anything from research labs to doctors' offices to overflow office space for BU. It helps to "fix" Mass & Cass in the same way that development in the Combat Zone led to that area becoming safer while squeezing out less desirable activity.

Are not charities - we will be seeing a lot more lab space popping up now that we have a mayor who made residential construction completely unprofitable. Also, you’re in for quite a sticker shock when you’re up for lease renewal.

Feel like it's becoming misleading to call Boston a city anymore. It's really just one big college and medical campus.

Having just come back from a weekend in Cleveland, where the streets are dead, I gained a renewed appreciation for the vitality that the academic and medical communities provide to Boston. Take those away and Boston is Pittsburg or Cleveland; nice enough cities, but not humming centers of activity.

has plenty of academics and a well-respected medical center.

Been to Pittsburgh in recent years?

I would have agreed with you about that in the 1990s.

I do not agree with you now.

Perhaps a road trip is in order!

The most energy efficient building is one that attracts no cars

204 parking spaces? Where is our city leadership? I thought we were trying to undo the mistakes of car-oriented development.

Master plan for that area

That area could really benefit from a master plan. I know there are pushes from transit advocates to turn the fairmount line into a subway line and there is also lots of low-rise existing buildings in that neighborhood but there could be a large benefit to looking at that area on a larger scale since it sits between the south bay mall, the south end , nubian square ,
Newmarket and 93....it's an intersection of so many diverse different interests.

There does appear to be an opportunity to create a vibrant neighborhood here with the appropriate planning.

There's a glut of life science space being built all over the place -- Somerville, Southie, Allston, Watertown, etc. If I were the one looking to expand my company, there would have to be a really good reason for me to move here instead of anywhere else.

If there had been turkeys and airplane noise, I would have gotten Bingo!

Man pushing wheelchair killed in Mass and Cass hit and run
Brasserie in the South End to reopen as a brasserie but with new chef, name
Somebody keeps forging Boston Medical Center checks and the hospital is getting tired of it
Non-profit sues supermarket on its South End land to move out by the end of July so it can put up a residential tower
Developer to file plans for two life-sciences buildings on Washington Street in the South End
Man charged as Mass and Cass crack dealer