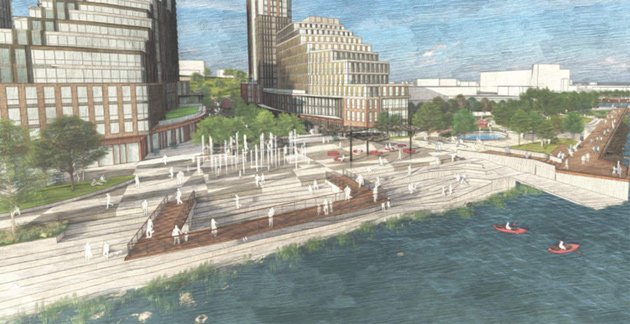 The Flatley Co. has filed broad plans for a proposed 25-acre development between Medford Street and the Mystic River that will feature buildings as tall as 22 stories - on a site raised 22 feet above water so it can double as a barrier to protect hundreds of acres well inland of its own holdings from the sort of flooding researchers now predict for 2070 as sea levels continue to rise.

In a "planned development area" proposal submitted to the BPDA, the Braintree-based developer outlined the sorts of things it plans to build on the site of a former sugar refinery - and the one-time home of Charlestown's only beach, so that it and the BPDA can essentially get down to rewriting the site's current zoning. The company will later file a "project notification form" that details more precisely just what it plans to build on the site.

Also proposed: 1,200 parking spaces in underground and above-ground garages and surface spaces, to replace the site's current 772 parking spaces. A community center and a dog park are also planned.

But Flatley begins its filing with a discussion of flooding - and the creation of a series of barriers, disguised as stepped or vegetation-covered slopes, rising to the rest of the development, 22 feet above the current usual level of the Mystic.

In fact, the company says it would start the multi-year construction project by building the riverfront "resiliency" components, which would total about five acres along the river and which it says will protect roughly 220 acres behind it in Charlestown from the sort of flooding expected by 2070 - as well as hundreds more acres in Somerville and Cambridge.

This Project puts resiliency against sea-level rise first. The resiliency measures taken as part of this Project will not only protect the Project itself, but more importantly it will protect hundreds of acres of Charlestown, Somerville, and Cambridge from catastrophic flooding through anticipated 2070 sea-level rise projections (the “Resiliency Component”). Based on the Coastal Resilience Solutions East Boston and Charlestown Report prepared by Kleinfelder, Sloss Landscape Urbanism, ONE Architecture, and the Woods Hole Group in October 2017, the waterfront of this PDA Area is the most vulnerable breach point along the Mystic River and is, thus, the entry point for storm surge flooding. A finger in the dyke [sic] is not an option; this Project must provide a real solution. As such, the Resiliency Component of the Project – that will cost tens of millions of dollars to complete - will comprise of raising the grade to 22 feet to create a sea-level-rise resilient barrier. The Resiliency Component will protect Boston and its neighbors for decades to come, and without this component of the Proposed Project, the City will be forced to bear the cost of multiple, disruptive, municipal infrastructure projects throughout Charlestown, each intended to chip away at sea-level rise, but none having the ability or opportunity to combat sea-level rise anywhere close to what this Proposed Project can provide.

Flatley adds, though, that this does not mean a massive flood wall:

Instead, the Proponent intends to integrate the flood barrier into a new, publicly accessible, waterfront landscape stretching from its property located at 529 Main Street, past 465 Medford Street, and ending at the eastern edge of 425 Medford Street (nearly one and one half miles in length). This new resilient edge to the waterfront will include an extension to the Harborwalk and other public pathways, passive and active recreation areas and seating, green spaces and parks, multiple look-out areas, floodable steps, and a public boat launch, kayak launch, and dock. Unlike so many other waterfront developments in Boston (and Somerville nearby), this Project will draw Boston residents in and bring them back to the water to an activated space unlike any other space in the City, in scale, in accessibility, and in quality.

On nice days, you could traverse the edge of the site to get down to the water - or even across it: 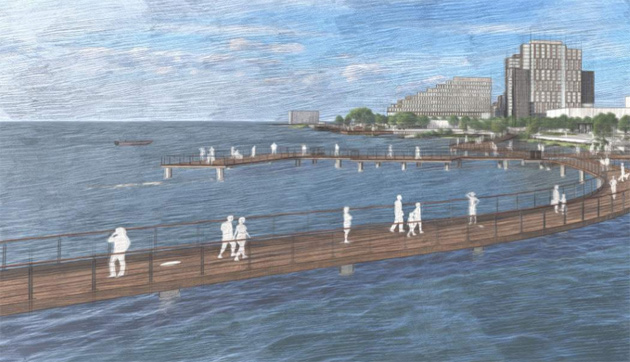 A 140-foot-wide walkway from Medford Street to the water would include a landscaped channel that would double as a "stormwater channel."

In addition to the publicly accessible waterfront, Flatley says roughly 13 acres of the site will consist publicly accessible open space, including pedestrian and bike paths and "multiple park and plaza areas that will include the planting of an abundance of new trees."

The proposal is one of several large projects that would dramatically change Charlestown. Earlier this year, developers proposed life-sciences labs, residential units and hotel rooms on 13 acres on the northern and western sides of Sullivan Square. Another developer has proposed a 29-story residential tower in the same area. An addition of 240 residential units to the Bunker Hill Mall could be the start of even more development at the six-acre site. And work continues on plans for a $1-billion redo of the Bunker Hill development that will include the addition of nearly 2,700 market-rate residential units to the existing, but rebuilt, public-housing apartments.

Charlestown needs more open space and youth athletic fields. This development should provide both of those.

So even more residents will ignore the no dogs signage, which is an almost daily 311 issue in Charlestown

There’s not enough parking for the current residents in Charlestown.
We don’t need this development/residents parking on Medford Street etc.
How about requesting the Developer to add net plus parking spaces on their property and free to Charlestown residents? Make this part of the approval process.

What is needed is a safe way to walk to the Sullivan Square Orange Line station which is barely 1/4 mile away.

Why can’t the put 22 story buildings on the East Boston waterfront, doesn’t Charlestown also apply to FAA height rules and regulations being across the harbor from East Noston/Logan Airport

Border Street in East Boston where Liberty plaza is situated right directly across from Charlestown will be tapped for future development maybe 10 to 15 years from now, or maybe sooner the way how rapid development for housing is going in Eastie , you might say the owners would want to make a proposal to the BDPA for a 22 story building or buildings similar to this proposal in Charlestown.

Medford Street is under the Tobin Bridge

A 22 story building is nothing next to that monstrosity. I'm betting planes don't fly near there already.

Aim pretty close to the Tobin. There's a bit of a right turn over Chelsea but the extended centerline of the runway probably passes within about half a mile of the highest point of the bridge.

The MBTA is planning on rebuilding all of its bus facilities, to support a larger fleet and electric vehicles, including major changes at Charlestown.

I live in Charlestown and

I live in Charlestown and think this would generally be a huge improvement for that area of town, as long as there some kind of transit component. I know they're including bike parking and some bike improvements that will benefit the entire community, but otherwise the plan looks to be fairly car dependent. The intersection of Medford, Main, and Bunker Hill Streets can often turn into gridlock and that will be the main way in and out of this property. I know this is only net 400 or so new parking spots, but a large number of the ones currently there go unused most days. I would love to see them work with the city to get more 93 buses (the line that runs on Bunker Hill) or even look into adding something to Medford Street. If they can nail that aspect then this seems like a win for all.

What if seas rise more, is there a scenario where 22 feet isn't enough? Check out the hurricane barrier that was built in New Bedford in the 60s to protect their harbor but now may be over come by strong hurricanes in the near future due to rising sea-level and higher high tides....kudos to them for trying to help with climate change though.

That's the factoid no one wants to actually address. In light of another near-nutless showing at the COP meeting in Glasgow, we can assume once again that the worst-case forecasts for the future will be upgraded to the more likely than not variety and a new, worser worst-case scenario will be put in the queue for eventual passage to the middle of the road case. For planners and developers it's a bit unfair because the goal posts are moving faster than the regulatory process, but that's why there's a need for leadership on this and not just same old same old bureaucrats.

I'll probably be dead before the real kaka hits the ventilation system, but your kids/grandkids are going to have deal with poorly constructed, shit-architecture and copious life sciences buildings all getting very soggy, and the city's tax base cratering. And no doubt the developers and corporate owners will get bailed out, so your kids will be paying for that too.