In lawsuit, competitor charges Wayfair is a leeching copycat 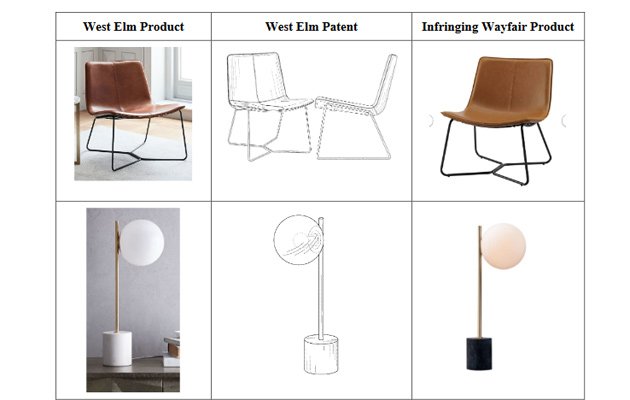 Some alleged examples of Wayfair infringement, from the complaint.

High-end stuff retailer Williams-Sonoma yesterday sued Back Bay-based Wayfair for patent infringement, charging the Back Bay-based company has copied many of its home-furnishing designs to try to foist them on an unsuspecting public as "exclusive to Wayfair."

"This is wrong, and it must stop," Williams-Sonoma declared in its suit, filed in US District Court in Boston. William-Sonoma, which also sells cookware and expensive snacks, is seeking an end to the alleged copying of its West Elm-branded goods as well as enough damages to make Wayfair think twice before doing it again.

Williams-Sonoma said it has design patents on numerous chairs, lamps and other home furnishings and that Wayfair has repeatedly ignored demands to knock it off with the knock offs:

This is far from the first time Wayfair has misappropriated West Elm’s work. West Elm has been forced to send numerous cease and desist letters over the years to police Wayfair’s blatant copying of West Elm’s designs and efforts to trade of its goodwill. Despite those letters putting Wayfair on express notice of WSI’s rights, Wayfair’s wrongful conduct continues.

In some cases, William-Sonoma said, Wayfair had the nerve to say its knockoffs were "West Elm inspired." But there's inspiration and then there's outright appropriation:

Its conduct goes well beyond drawing “inspiration” from the West Elm brand, but rather, coupled with its use of West Elm patented designs, Wayfair is competing unfairly and deliberately attempting to free-ride on the goodwill of West Elm.

Neighborhoods:
Back Bay
Topics:
Business
Free tagging:
Lawsuits
Wayfair
Ad:
Like the job UHub is doing? Consider a contribution. Thanks!

Wayfair is where you go to get 2 things

1. Knock off of designer stuff
2. Broken Upon Arrival furniture

I get the legal end of this but... furniture people have been copying each other for decades. I mean look at the effect IKEA had on pre-fab furniture. Now crap you buy at Walmart has that 'ikea feel' to it.

Not only that, most of the

Not only that, most of the stuff comes from the same factory and it's designed and made by the same people. I know this is true for consumer appliances but I assume it applies to other areas such as furniture. The only thing different between the companies that brand these products is their marketing team. Our capitalist system that we treasure so much gives us an illusion of a wide variety of choices but in reality it's the same s*** no matter where you buy it.

A failure of management

It would be one thing if some rogue designer at Wayfair copied some shit and put it on sale, hoping that he wouldn't get caught. This sounds like Wayfair ALLOWS and ENCOURAGES this, even after they get caught. I don't like the idea that a major Boston company is running a business based on theft.

neither site makes their own furniture

All of this stuff is made overseas and so it is exact same design because they gave the specs to another factory.

there are only three ways to make potato chips yet there are hundreds and hundreds of varieties and brands. they are all made by the same people and packaged in different bags.

they are all made by the same people and packaged in different bags.

I really doubt the truth of that statement. I am sure that Tri-Sum chips, made in Leominster, are not the same as Lays. They are, in fact, one of at least 16 regional brands.

I agree. But they are

I agree. But they are probably made by the same kind of machines.

imagine trying to patent the shape of a chair that doesn't even do anything special.

In the 19th Century, the USA had a reputation for producing cheap imitations of European-branded goods. That has been mostly passed on to other countries, but maybe someone at Wayfair is nostalgic for the old days.

You're next, Restoration Hardware.

I recently went on their site to look for some, well, restoration hardware, and they're now called "RH" and sell modern things.

They've got just what I need!

I purchased a trafficked child from Wayfair in May of 2020 and the child I received was suspiciously similar to one I saw in West Elm the previous autumn. The freckles were too close to be a coincidence.

They needed money for the lawsuit

Home goods mega-chain Williams-Sonoma fired scores of remote workers in a conference call just days before Christmas — and a full month before their short-term seasonal jobs were expected to end,

Yes, four of those weird helicopters just flew over Boston
Some Orange Line machinery that's been obsolete for years but is still plugged in and still kind of works
Moving-truck driver chooses backup of shame over truck haircut
Faulty Green Line door proves hard to ignore
Grubby alley wouldn't do for the entrance to a speakeasy at a luxury hotel, so developer of new Raffles tower in the Back Bay is planning what could be world's first 'sky speakeasy'
Smoots Forever