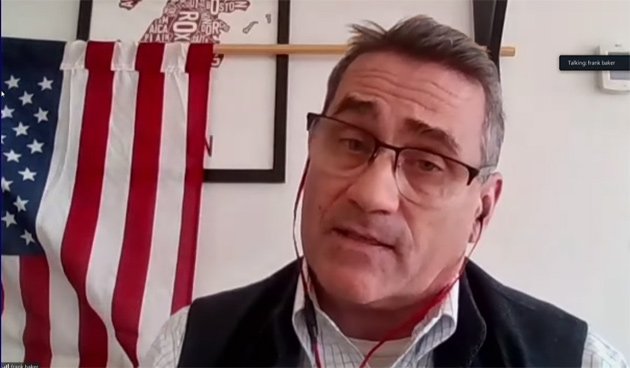 Baker to Wu: Tear down those mandates.

The City Council today agreed to hold a hearing on how the Wu administration is dealing with Covid-19, possibly as early as next week.

And the administration is keeping councilors like him out of the loop, unlike Marty Walsh, who held frequent meetings with councilors on Covid-19 in the early days of the pandemic.

Baker said he wants the hearing on the issue to be held in person, unlike the past two years of City Council hearings, which have been held online via Zoom. He said that if Wu and her minions don't want such a hearing, they could simply drop the mandates on Monday or Tuesday and he'd call off the hearing.

"We need to hold people accountable," Baker said, demanding to know whether other councilors would like it if they had to show ID just to vote. Baker did not explain the specific public-health risks involved with casting a vote.

City Council President Ed Flynn assigned the hearing to the council's Committee on Public Health, chaired by Councilor Erin Murphy (at large), who co-sponsored the proposal with Baker - the committee's vice chair.

Last week, Murphy requested her committee be allowed to hold a hearing on the vaccination mandate for city workers, Flynn assigned that to the committee that deals with the workplace in city government.

Murphy today focused on what she said was a lack of meaningful data for both councilors and the public. She noted as of yesterday, the last Boston Public Health Commission weekly Covid-19 report had been posted in September and the supposed Boston Covid-19 online dashboard no longer even works. Sometime today, BPHC added a weekly report from yesterday, although it is dated "08-08-2022." She questioned whether the Boston Public Health Commission even has its full complement of board members.

Outgoing City Councilor Lydia Edwards (East Boston, North End, Charlestown) agreed with Baker and Murphy on the need for increased transparency on Covid-19 efforts, but pleaded with them to be responsible and allow people to participate in the hearing remotely.

"It's the safer option for some people, who really are concerned about contracting this disease," she said, also asking that Baker and Murphy insist that people who attend wear masks. The council as a whole today held its third straight Zoom meeting after a group of mask protesters attended its in-person meeting and refused to put masks on.

Edwards also urged them to try to maintain a civil hearing rather than allowing it to become "a rally moment to scream about their frustrations."

"It's disheartening how cruel people have been to each other" over masks, she said. And one purpose of the hearing, she said, should be how to prepare for life with Covd-19, which she said she doubted will ever disappear completely, in a way that is "respectful, kind and actually brings people together."

I wish Baker were actually as cool as Robert Deniro.

Something tells me that the

Something tells me that the Boston Public Health Commission having a full complement of board members won't help here.

at the national level you know motherfuckers like ted cruz or whichever of these contemptible right-wing puds are lying about vaccines and masks or whatever. that really sucks.

but i am still just absolutely dumbfounded that an ostensibly “normal” person like frank baker – who doesn’t have to convince hundreds of thousands of people of his bona fides where bowing to donald trump is concerned – continues to pretend that covid will just go away if we don’t think about it.

That's not Baker's position and you know it

We need people like Cllr. Baker to push the conversation on off-ramps for emergency powers and restrictions or we will be stuck in this crisis mindset forever. That mindset has already done damage to public confidence in public health guidance, when they see how resistant public health leaders are to adapt to changing conditions.

And, the union position while you may disagree is understandable from a worker-power perspective. The previous two mayors negotiated the policy with them as partners, Wu came in and imposed a policy from on high. That's a tough precedent for unions to accept.

Off ramps you say?

You mean like the ones which the Mayor outlined yesterday? This is a non-serious crank looking for publicity, that's all.

what else could he have meant when he said that people need to be held accountable? what should a reasonable person infer from those comments? the comment about the December press conference? his ultimatum re: having his inquiry in person *or* ending the mandate?

He's literally calling for a hearing to talk through the current situation and justify the ongoing use of these extraordinary powers.

That mindset has already done damage to public confidence in public health guidance, when they see how resistant public health leaders are to adapt to changing conditions.

And, the union position while you may disagree is understandable from a worker-power perspective.

Are you believing what you’re seeing or seeing what you believe? There are adults in the room, the pasty doofuses from Dot aren’t among them.

This is exactly the mindset I'm talking about

MA case numbers have been cratering for a month, down by a factor of 10, hospitalizations down to early fall levels, state leading the nation in vaccination.

But you mock the very concept of "changing conditions," a total denial of reality in favor of this strange attachment to panic and crisis.

You speak with the confidence of someone who can’t be bothered to check the basic numbers.

Hospitalizations are falling but are at the same levels as late December (12/23 to be exact). Not early fall. https://www.nytimes.com/interactive/2021/us/massachusetts-covid-cases.html

I’m not mocking changing conditions, I’m eager to move past the panic and crisis, when this disease isn’t killing thousands of Americans a day. But I’m also not stupid enough to look at 2500 deaths a day and conclude that it’s all clear now! And while we’re here I’m sick and tired of disingenuous clowns (I’m talking about you, just to be clear — we call your mindset “stupid”) who will make any argument against vaccines and boosters, against masks, against basic protections for ourselves and our neighbors, utterly devoid of facts. We live in a marvelous world and a marvelous age, and it’s utterly wasted on fools like you.

Your abuse is more evidence of your unbalanced attitude

I got vaxxed and boosted as soon as I could, and I follow the indoor mask rules religiously, even when others around me do not. And I support vaccination mandates as a rule.

I simply believe that there has to be public conversation about the use of unusual public powers, and that the downsides of mandatory cautions have to be taken into account.

Btw, hospitalizations *for* COVID, not hospital patients who happen to test positive, are indeed down to early fall levels.

I apologize, I was mean.

I still don’t buy these downsides of vaccination, mandates and masks. And most people who make those arguments — maybe not you, so I apologize for accusing you — don’t have a better solution than “let them die,” which is a poor public health strategy. The public conversation about public powers is a bunch of whack jobs screaming outside the mayor’s house and trolls on Twitter.

I’m curious about this hospitalizations for covid data, can you point to a source?

I would rather have council hearings

On the upswing of violent crime in Bakers district especially on the red line.

This seems like it’s as much about wu shutting out

Her former colleagues on the council as it is on subject of the hearing. I would expect Wu to know how to massage the council and avoid this kind of saber rattling.

I imagine councilors are

I imagine councilors are responding to union pressure in agreeing to hold the hearing. It's a shame that Wu's first-100-days as mayor are being wasted on vaccine mandates that turn off a lot of people with really nothing to show for it.

It's a little bit more than that

Yes, the unions flex a lot of muscle, and I would imagine that it's not a coincidence that the two Council members making a lot of noise on this either live near (Murphy) or represent (Baker) the locations of the headquarters of the firefighters and police patrolmen's unions.

That said, there's also the issue of the mandate that restaurants and certain other venues require proof of vaccination of their patrons. Remember, the vaccination rate of City of Boston employees is around 95%, even in the supposedly reticent bargaining units. That's higher than the city and metro area as a whole. It does appear that there are restaurant owners who are less than thrilled to be put in a position to turn away patrons.

"they could simply drop the

Does he mean that you can engineer a major shift in public policy but just refusing to have a meeting with him. That's some power Frank Baker has. Perhaps he could've scheduled a meeting with the virus two years ago and saved us all this trouble.

I wish Frank Baker would shut up forever and go away, also forever.

He's up for reelection in 21 months

Somehow, he keeps on getting reelected, so I would say that you might want to get used to him.

You Can Check The Tape On Tape

Because he has complained about Frank Baker time and time again but somehow doesn't put his nomination papers in to run.

Must be because he knows his arse would be throw up and down Dot Ave by the voters.

It’s because he’s the only councilor actually representing he’s voting base. The vast majority of the city council thinks theyre a federal employee.

Potholes and trash issues. That’s what they should focused on. It’s also why Wu is way out of her depth.

Wow! Robert DeNiro! I've never seen such a perfect resemblance! Sincerely so cool. Thank u for reminding me it's time to watch Goodfellas again.

Time for your eye exam.

Time for your eye exam. Perfect example of why eyewitnesses are so unreliable.

Time was, you could rent an apartment, then grab some donuts for the celebratory road trip in your Chevy Vega
BPD captain who had been on paid leave for more than two years cleared of most charges
Rats running amok through Boston; residents, councilors demand action
No matter where on earth they roam, people will know Boston is their home
Court to Quincy: Boston can rebuild its bridge to Long Island
All diseases skillfully treated