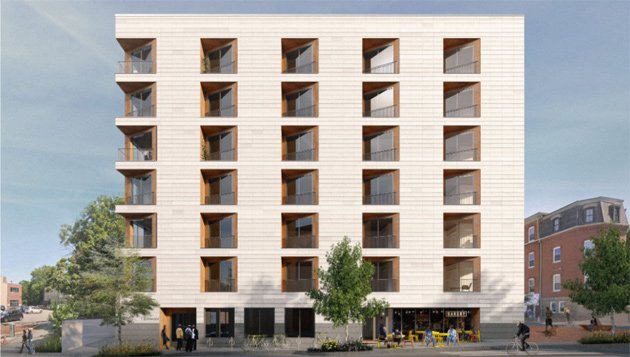 A Roxbury developer today filed plans with the BPDA for a seven-story building with 46 "compact" apartments and one condo on Elmwood Street at Roxbury Street, behind the Islamic Society of New England Cultural Center.

Under Triple-W Development's plans, the building would be mainly split between studios from 305 to 334 square feet and two-bedroom units between 663 and 687 square feet - topped with a single two-bedroom penthouse unit of 1,087 square feet, with no parking spaces.

Aside from the penthouse unit, the apartments are smaller than normally required by city zoning - which calls for a minimum studio size of 450 square feet - under a "compact living" pilot aimed at reducing housing prices through creation of smaller units and elimination of parking spaces in buildings near transit stations, in this case Roxbury Crossing on the Orange Line.

Seven of the units would be rented as affordable, to people making no more than 80% of the Boston area median income.

The building would be designed to meet "passive house" standards for reduced energy consumption and carbon footprint. The roof would have space for the installation of solar panels - along with decks for residents.

In addition to the apartments, the building would have 2,700 square feet of retail space.

Providing those people with opportunities for housing is outstanding. Lowers the total impact on the rest of us, and "preserves" units that might meet our needs better for us, rather than 2-5 of them sharing the larger apartment.

Please build these until demand for them is exhausted!

would be very cool to see some more of these go up on that stretch of parking lots between jackson square and roxbury crossing. then build some family sized apartments too. obviously small sized and efficiently units are the cheapest to build and necessary to get students out of existing housing for families, but some new 3bd+ units would be nice too.

is this a dormitory

will the city study their own pilot? Will the sub-450 sf units actually be less and therefore more affordable over time?

And a permanent ban on

And a permanent ban on getting a street parking permit, in order to reserve the street for longtime residents with big, inefficient houses and driveways.

Put on some orange metal corrugated doors and squint…I have seen better designed u-haul self storage buildings…self storage for people, not things. But build it!

I would not want all

I would not want all buildings to look like this but I like how it is different from the lego look that seems so popular.

Is anyone else curious about this 2 bedroom penthouse? A single condo floating on top of all those mini units. I have to assume the developer is planning on obtaining that unit for themselves? Should have some nice views.

I thought that too

But a two-bedroom with 1,087 sq. ft. is a pretty tight space for someone with the wherewithal to make a project like this happen. Maybe they're building a space for their kid to live in?

Another bag of bullets found at Boston Latin Academy
Marching to support trans lives in Boston
Man arrested for murder on Rockland Street in Roxbury
Man charged with selling drugs right outside Mass and Cass shelter
Board approves marijuana-delivery service in Grove Hall, a block from cannabis shop
Roslindale man was speeding through Roxbury with a gun and a loaded magazine, police say