Fields Corner bakery hopes to replace the liquor license it gave up at the height of the pandemic; would use it to restart evening events 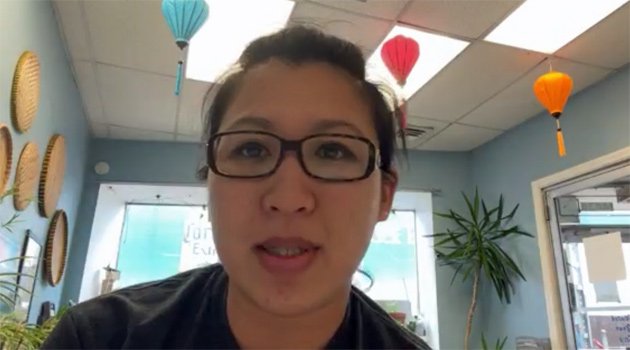 Annie Le makes the case for a liquor license.

As the pandemic decimated the restaurant business, Home.Stead Bakery and Cafe in Fields Corner gave up its liquor license to try to save some money.

With people going back out now, the 30-seat bakery, at 1448 Dorchester Ave., formally requested a new license from the Boston Licensing Board at a hearing today. The board will likely vote on the application tomorrow, although whether it has one to dole out is another matter, given that the state limits the number of liquor licenses Boston has.

One of the bakery's co-owners, Annie Le, said that with a liquor license, the bakery could re-start the sort of evening events that people would otherwise be reluctant to book, such as painting nights and other art-related events, open-mic storytelling and even succulent-planting evenings.

She added that such events would then give local folks a place to go locally in the evening. "A lot of people go out of Dorchester in the evenings," she said.

In 2016, Home.stead was awarded one of the several dozen "neighborhood" licenses the legislature did grant Boston, in the culmination of a successful campaign by then City Councilor Ayanna Pressley to help smaller entrepreneurs who couldn't compete with waterfront and downtown chain restaurants for the city's limited number of regular licenses.

Unlike regular licenses, which can be resold - now for up to $400,000 - neighborhood licenses revert to the city when a holder goes out of business or, in Home.stead's case, does not renew. The board can then issue it to another outlet in Dorchester, Mattapan or Roxbury or in the city's "Main Streets" districts, but not in areas such as downtown and the North End.

Although there is no purchase price, holders have to pay an annual renewal fee, based on the number of seats in their establishments.

"the state limits the number of liquor licenses Boston has."

There's no good reason for this. It's a protectionist measure for businesses that fear competition. It adds an artificial and unnecessary hurdle for business to serve the community and create a handful of jobs. Creating a new liquor license should be as easy as finding the form and File->Print...

The false scarcity of liquor licenses means that you can’t open a restaurant without financing an additional $500K above all your other costs, just to hold the license. Pretty nice deal for the banks, eh?

It's all about control

The inability of Boston to control its own liquor licenses comes straight from the ethnic rivalries of the 1930s. When Prohibition was lifted, Boston city government was dominated by Irish Americans, while the state was still dominated by the Brahmins. Needless to say, making life hard for Boston was high on the state priority list.

IMO the way Home.Stead used it's liquor license previously was very good for the community. The space often acted as a third space on evenings it is open and it's hard to do that without a little bit of liquor. It's the best of all worlds, the community gets cool fun activities with people spending time in Fields Corner but it's a very relaxed low key environment. I hope they have a license available , the area needs that boost at night especially with 50Kitchen closed.

For full disclosure I was Executive Director of the Fields Corner Main Street program for Three years but maintain no formal connections now.

State trooper who was acquitted for role in Dorchester fight sues State Police for back pay, benefits
The four-way race to replace Sonia Chang-Diaz in the state senate
Court upholds man's life sentence for murdering a Dorchester teen in 2008
This storm was not messing around
Man who claimed to be a cop robs and tries to rape woman at gunpoint in Dorchester, police say
Transit Police officer gets probation after admitting he beat a homeless man at Ashmont station then lied about it