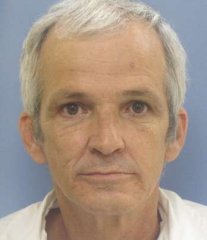 A man indicted 2 1/2 years ago for raping and murdering a woman in a South End hotel in 1980 was finally transported to Boston today for his arraignment, the Suffolk County District Attorney's office reports.

Steven Fike, 63, was extradited from an Alabama prison to be formally charged here for the death of Wendy Dansereau, 19, of Worcester, in what was then the Hotel Diplomat at 26 Chandler St. at Berkeley Street on March 18, 1980.

Fike is currently serving a sentence of 999 years, 99 months and 99 days for murdering Patricia Ann Culp, 20, in a motel room in Bessemer, AL, then dumping her body in a neighboring county on Jan. 30, 1982. Prosecutors said the two had met at a nightclub where Culp was a dancer. He becomes eligible for consideration of parole in that case in March.

When the Suffolk County District Attorney's office first announced Fike's indictment for Dansereau's rape and murder, it said prosecutors and Boston Police detectives began building a case against him after his DNA matched a sample taken from Dansereau's hotel room.

Dansereau died just three weeks after having given birth to a baby girl. Press accounts at the time said she had been staying at the Diplomat while trying to get into public housing.

About two months after Dansereau's murder, Fike was back in Alabama - and being admitted to an Alabama prison to serve a sentence of one year and a day for grand larceny, according to Alabama prison records.

At the time of both murders, Fike was married to an Alabama woman, although separated. In 1982, the woman gave birth to a child who was taken away by the state a month later for parental neglect. In 1983, Fike, already imprisoned on his Alabama murder conviction, sued to try to have the baby given to his parents - even though he testified the baby could not have been his biological child because he had no contact with his then wife for ten months before the baby was born.

BOSTON, August 11, 2022—A man incarcerated for murder in Alabama was arraigned today in a Boston courtroom for the 1980 rape and murder of 19-year-old Wendy Dansereau, District Attorney Kevin Hayden said.

STEVEN FIKE was arraigned today in Suffolk Superior Court after his extradition from Alabama, where he is currently serving a sentence of life with the possibility of parole for a 1982 rape and murder. At the request of Assistant District Attorney Edmond Zabin, Chief of the DA’s Homicide Unit, Fike was ordered held without bail.

Zabin told the court that, on the morning of March 18, 1980, an employee of what was then the Hotel Diplomat found Dansereau dead in a room. She had been sexually assaulted and strangled. A DNA sample collected during the early stages of the investigation was entered into the FBI’s Combined DNA Index System (CODIS) and matched to the defendant’s genetic profile. Fike’s DNA had been entered into the database as the result of his 1982 Alabama conviction.

The investigation by Boston Police detectives and Suffolk prosecutors working in the grand jury gathered evidence that Dansereau, who had engaged in sex work, met Fike the previous night. Fike used a fake name when he checked into the hotel with the victim, Zabin said. A red blouse was found wrapped around Dansereau’s neck.

“This is a case where preservation of evidence, diligent investigative work, and science have combined to bring a man into court for the death of young person who never got the chance to discover where life might lead her. I hope her family and friends can find some comfort in knowing that someone will face justice for her death,” Hayden said.

Fike returns to court September 13 for a pre-trial hearing. Under the Interstate Agreement on Detainers, a trial date must be scheduled within 120 days of arraignment for a defendant extradited from another state. Fike’s trial is currently scheduled for December 5, 2022. He is represented by Attorney John Hayes.

All charged individuals are presumed innocent until and unless proven guilty beyond a reasonable doubt.

Suffolk County District Attorney Kevin Hayden’s office serves the communities of Boston, Chelsea, Revere, and Winthrop, Mass. The office handles over 20,000 cases a year. More than 160 attorneys in the office practice in nine district and municipal courts, Suffolk Superior Court, the Massachusetts Appeals Court, the Supreme Judicial Court, and the Boston Juvenile Courts. The office employs some 300 people and offers a wide range of services and programs to serve anyone who comes in contact with the criminal legal system. This office is committed to educating the public about the services we provide, our commitment to crime prevention, and our dedication to keeping the residents of Suffolk County safe.

… the guy who led that extraterrestrial cult in LA to suicide. Could be his brother.