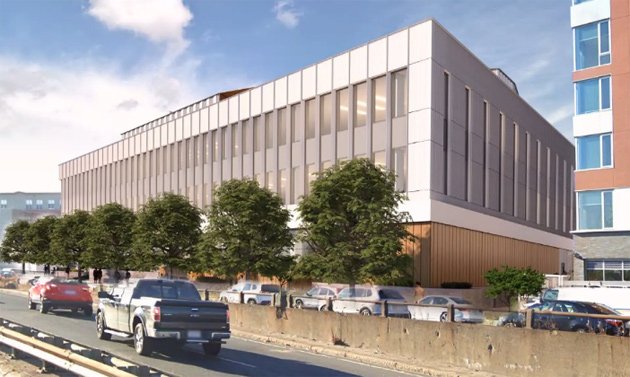 The Zoning Board of Appeal yesterday approved plans by Related Beal to replace a self-storage building at 420 Rutherford Ave. with a three-story building aimed at life-sciences startups - although in a pinch, a robotics developer could also rent space there.

The proposed building, next to a residential building that is part of the Hood Park complex, would be limited to Biosafety Level 2 work, or what Related Beal attorney Jared Eigerman referred to as "cells under a microscope" - that is, relatively benign cells, not cells that could cause deadly disease if they escaped. The approval allows for other sorts of development work to go on in the building, including robotics or other mechanical development.

One resident, Johanna Hynes, said she was concerned that Related Beal's renderings show a bucolic scene along Rutherford Avenue that features a butterfly garden and large shade trees when there's no indication that Related Beal is actually going to transplant large trees instead of planting skinny young trees that could take years or decades to fully develop shade canopies. She added she is concerned about the potential impact of the fact that Rutherford Avenue once formed part of the historic Middlesex Canal.

Eigerman said his client had worked extensively with BPDA and BTD planners on its designs and had historians take a look at the canal issue and concluded there wasn't one. He said the building would be replacing an existing structure.

Among those supporting the project: The developer of Hood Park, which said Related Beal had met with residents of the neighboring building.

Noise from the larger HVAC systems required by life-sciences labs has been an issue in other neighborhoods with biotech butting up against residential buildings; Related Beal proposes to deal with that by placing its building's HVAC systems on the side of the roof away from its residential neighbor, with roof plantings between them and the residences.

The BPDA approved the project in April.

No one will notice the building once the creature inside escapes.

For a realistic rendering of the decrepitude of the Rutherford Ave. underpass.

"with roof plantings between

"with roof plantings between them and the residences."

YES more roof mitigation PLEASE. Rooftop heat effect is something nobody is willing to talk about but is vital to sustainability. Hopefully this isn't just a row of bushes but an actual roof garden.

Green roofs have other pluses, such as storm water mitigation, and protecting the actual roof from UV rays and associated degradation, but they also require a lot of maintenance to keep them green and growing.

Boston music crisis: Another large rehearsal space set to close, this time in Charlestown, councilor says
More loud banging reported, but probably not F15s this time
Man arrested for taking a snooze in his car on an I-93 onramp in Sullivan Square - and for being drunk and having a loaded gun - DA says
For first time in centuries, native Americans use traditional fire technique to create canoe along the harbor, then paddle it into the water
Sewage flowed into Boston Harbor this morning
Repair work on unfinished North Washington Street Bridge has started; state hopes to open span to vehicles in December, 2023