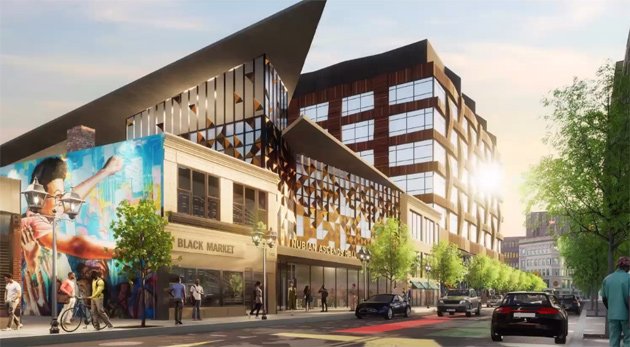 The Zoning Board of Appeal today two new complexes between Washington Street and Harrison Avenue and Melnea Cass Boulevard and Palmer Street in Nubian Square on land that had mostly been used as parking lots for decades following widespread demolition for urban renewal and a highway that never got built.

The board first unanimously approved the Nubian Ascend complex, which would include an eight-story lab and medical building with a focus on training students from local high schools and the soon-to-be-near Benjamin Franklin Institute of Technology in robotics and other non-life-sciences technologies, a marketplace and culinary center that will combine space for artists to make and sell their wares and a food hall with local operators, a large cultural hall for performances and cultural events and a building with 15 condos, 10 to be sold as affordable and aimed at keeping artists in the neighborhood.

Developer Richard Taylor, one of the partners in the project, emphasized the local nature of everything that would go on in the new complex. As one example, he said the 20-year-old Roxbury Film Festival, which currently has to do its screenings at the MFA in the Fenway, would be able to move its annual program right into Nubian Square.

The complex will also include a 300-space garage for a commercial district that was once full of parking lots, most of which are now being replaced with new buildings.

Three-story gallery for artists to show off their work: 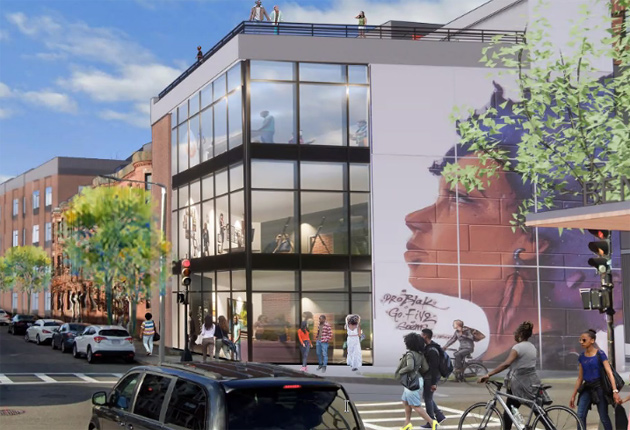 Taylor, London-based real-estate investor Mario San Jacinto and Black Market owners Kai and Chris Grant won BPDA approval in late 2020 to redevelop the 2.4 acres of land, once home to the Blair Foodland supermarket, which the BPDA has owned since 1985.

Taylor estimated that three to four floors of the eight-story lab building are already spoken for, and said that his group and the Franklin Institute have a $750,000 grant to buy lab equipment.

"This is one of the reasons I wanted to be on the board," member Eric Robinson, an architect, said, praising the plans for what he called "an amazing urban space in our city."

"I think it's amazing and I'm excited to be here to see this come through on my watch," Robinson added.

This could be one of his last votes on the board, because Mayor Wu did not include him in her proposed list of zoning-board members that the City Council could vote on tomorrow. Christine Araujo, who had chaired the board for more than 20 years, did not attend today's hearing - she submitted her resignation Sunday, before Wu announced her proposed board reorganization.

Board member Hansy Better Barraza, who will be staying on the boad, if the City Council approves, voted "yes, yes, yes."

Not long after approving Nubian Ascends, the board also unanimously approved developer Urbanica's plans for a two-building, 109-unit residential complex about a block away from the Nubian Square Ascends site, on an acre of land now owned by the city and state, and used as a parking lot.

Most of the residences would be rented or sold as affordable. The units in the buildings would be split between apartments and condos.

The buildings, heated by electricity, would be topped by plantings and solar panels and a total of ten parking spaces.

In addition to preserving the existing trees along Melnea Cass Boulevard, Urbanica will plant 48 new trees.

The BPDA had earlier approved both projects.

If it gets built

I feel like some of these projects in that area always seem to be 'stop starts' meaning.. something gets proposed and approved and it never materializes. Or if it does it takes YEARS to do.

If it gets built, this is a win win for that area that needs all of this.

Great news on the approvals

Both are fantastic projects that will really complete activation of the Washington corridor between Nubian Square and Mass Ave. As Cybah notes, the proof is in the financing, but I think a lot is aligning in the right way for both of these, and am fairly confident the money will be there.

I think so too

the pessimist and repeated fails on stuff getting built in Nubian Sq is why I say that.

But I agree. There's activity nearby and that space is ripe for development, especially when there's limited amount of free space in the city core. I think this will happen and more. That area could use something new.

And I agree.. proof is in the pudding. Or the funding in this case.

With the way rates are rising

I think the window to get these projects financed may be closing, if it has not already. The economics are going to look at lot different if rates are 7% vs. 4% for a commercial loan.

10 Parking spaces on top of

10 Parking spaces on top of the building?

the parking is in a small ground floor garage (see page 19 of the linked document).

Wow! Just what the area needs!

300 PARKING SPOTS?!?! This is insane. Streets are already gridlocked, and they’re adding 300 more.

300 is insane. If the other building only has 10 then that’s great news. More room for people instead of cars.