Police: Guy was traipsing around Dorchester with a loaded AK-47

Boston Police report arresting a man they say was hanging out at 47 Ballou Ave. early Saturday after firing at least one round from his AK-47.

Police say that when officers, responded there to a report about a guy dressed all in black and carrying a rifle, arrived around 5:45 a.m., Mohamed Bile, 26, began to run from them:

After a brief foot chase, officers were able to catch up to and apprehend the suspect in the rear of 16 Jones Avenue. Upon retracing the steps taken during the foot chase, officers were able to see and take possession of an AK-47 rifle. When asked to explain why he ran upon seeing the approaching police officers, the suspect stated, "I thought someone was trying to shoot me."

A Dorchester District Court judge set bail at $50,000, but Bile won't be going anywhere because it seems Immigration would like a word with him as well, the Suffolk County District Attorney's office reports. Bile is also facing charges of criminal threatening with a dangerous weapon and receiving stolen property in South Portland, ME, where he was arrested on Sept. 30.

Bile dressed all in black per police, at least his socks matched

Dorchester is a helluva place

Where else in the city do you get this type of entertainment. Ashmont station in the afternoon has more cops than Occupy Boston so somethng is going on. He had an AK47 and was running the other guy must have had a flamethrower. In the midst of all this Peabody square and Codman square look great and Dot Ave has several great restaurants ranging from Irish to Vietnamese cuisine

I wouldn't use the number of cops at Occupy Boston to indicate much at all... 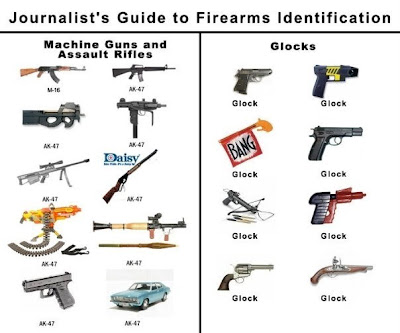 Why don't you ask Boston Police. They're the ones who said:

"Police Pursue and Arrest Man with AK-47 Rifle in Dorchester."

re: journalist guide to firearms

This chart is a riot. Similar chart could be made for 'journalist guide to military rank' or 'military units'. Can't say how many times I've seen things written like, "Colonel Smith, the Company Commander, stated...." It's actually improved a bit since Sep 11th and embedded journalists.

Mr. Bile. Mohamed Bile.
Is that like Abraham Pus or Jesus Sputum?

Today was a Muslim holiday.

Today was a Muslim holiday. Eid ul Zuha. Amazing to hear that a Muslim with a name like Mohamed Bile would spend the holiday firing from an AK-47.

How do you know his religion?

The police report doesn't mention it, and I don't see any photo where he is wearing religious symbols.