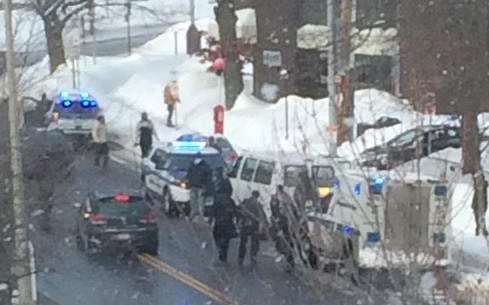 Boston Police report charging a Hyde Park teen with murdering a man in his 20s around 10:30 a.m. on Centre Street near the Arborway, then opening fire on an officer who started chasing him.

Boston Police report the murder happened outside 891 Centre St., near the Arborway rotary.

Two men were captured. Josiah Zachery, 18, of Hyde Park, was charged with murder, unlawful possession of a firearm and assault with a dangerous weapon on a police officer.

WCVB reports the murdered man was shoveling snow as part of a program run by Roca, which provides work programs for "young people that are involved in crime, engaged in dangerous behaviors, have rejected help, have dropped out of school, and are simply too difficult for other programs to serve."

Ironically, about three hours after the murder, city councilors singled Roca out for praise and expressed the hope the city could work more closely with the group. However, at that point, it was possible none of the councilors knew of the Roca link.

I was thinking the other day that the one, and probably only, upside of all of the snow and cold was that we haven't had a shooting in a while. From what I've gleaned, we've had 3 murders in Boston so far this year. Commissioner Evans even noted this upside of what we are enduring.

Hope everyone is safe and that they get this guy.

Sadly, I was walking in Grove

Sadly, I was walking in Grove Hall yesterday thinking the same -way neighbors out shoveling, commiserating, tackling a common enemy.

The commish made a valid, albeit sick and twisted,point when he praised the snow as it has lead to a great reduction in the crime rate. May the young man RIP.

Bostonglobe online has more details including saying that one person is dead and that BPD were fired upon by someone during the event. They don't say that BPD fired back.

If the victim was a cop, we would have heard about it by now.

My condolences to those who know the deceased. We should all perhaps withhold our views until we find out what happened. Just saying.

What you deal with on a daily basis for posting one news article about a deadly shooting. Bless your heart, and thank you for not giving up on those of us who just want the news quickly.

On the use of the word "thug"

Let's cut the bullshit. You people pretending you don't see race are not Stephen Colbert, you don't have TV shows and you're not in the least bit funny or cute about it. So stop with the faux outrage over being called out as racists. Because whether or not you think you are a racist, you're acting like one, and at some point, the distinction becomes negligible enough to be non-existent.

As I've acknowledged before, I have used the word "thug" in the past to describe any jerk with a gun, like, for example, Whitey Bulger (more specifically, murdering thug).

But I don't use the word anymore. Language changes. As enjoyable as you find it to use the word "thug," it has come to be associated with young black men who commit crimes. Actually, no, it's come to be associated with young black men, period, because there are a lot of folks out there who seem to think all blacks are responsible for all crimes committed by some blacks, in a way they would never associate all whites with all crimes committed by some whites. It's become the Lee Atwater way of calling blacks a particular word without using the word. You know what you're saying, blacks know what you're saying, those of us who are not black but who care about such things know what you're saying.

So cut it the fuck out.