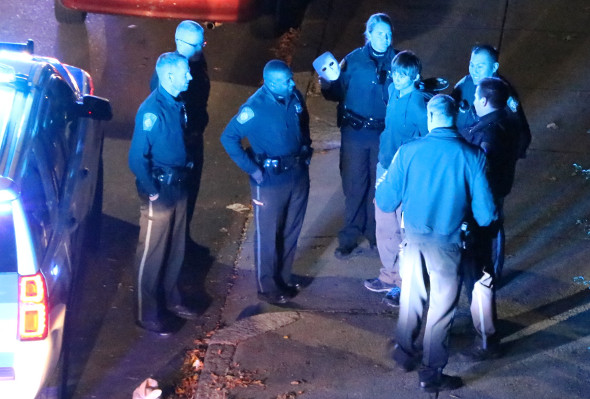 Suspect under arrest on Pleasant Street. Photo by Carter Hasegawa.

A man on his way to work was robbed around 10 p.m. by two men in white plastic masks, one about 5'9" and the other about 6'1". Police stopped and arrested two suspects, one with what turned out to be a non-functional starter's pistol, around 10:25 p.m. at Savin Hill Avenue and Pleasant Street.

According to a police report, the two grabbed a bag the man was carrying - a bag that only contained a salad. Police did not recover the salad, however - despite a search on Thornley Street, where one of the suspects told police he'd tossed it.

Andronique Dossantos, 18, of Dorchester, and Kostya Ragin, 19, of Needham, were arraigned today in Dorchester Municipal Court on armed-robbery charges, the Suffolk County District Attorney's office reports. Judge Serge Georges, Jr. imposed $3,500 bail for Ragin and $2,500 for Dossantos and ordered them to abide by a curfew and wear GPS devices, the DA's office reports.

According to the DA's office, the gun was a Mondial Model 1938 starter’s pistol, "not capable of firing bullets."

what a menacing suspect!

what a menacing suspect!

The cops sure look happy and

The cops sure look happy and why not? Glad they caught the little thuglet.

With Scooby Doo no longer on TV

You're clearly not keeping up on your Cartoon Network lineup.

New, but hardly fresh, given that the basic plot of every Scooby-Doo cartoon ever made since its inception is identical.

Was never a fan of the cartoon myself, but I've watched enough episodes with my nephews and nieces to figure this out.

I hope the police look at his

I hope the police look at his posts on instagram (@weed_loves_me) in a halloween mask holding a pistol that was posted at 9:30 last night tagged in Dorchester. Good thing this moron isnt trying too hard to be tough. Not so smooth criminal.

That was an interesting little video

Nice visual effects and all. Come to think of it, I saw

Come to think of it, I saw this guy and his little scum pals wearing these very masks in DTX station last week. Or at least I saw some other little scum wearing them.

Another whigger, just what we need.

Dunno if I would classify a

Dunno if I would classify a Hispanic kid as 'whigger', but, hey, maybe?

I don't know about you, but I've never seen a hispanic russian jew - definitely a whigger.

Looking at his IG

In a little over a year he goes from looking like a boy-band member, to a punk skater and now to a thug.

This kids a confused little punk who needs a good ass whooping, and seeing he looks like a 100 lbs soaking-wet im sure it coming soon.

The other guy in this photo is the 2nd suspect in the robbery.

"Hold up, bro....before we go rob some peeps, we gotta take a selfie and put it out there for my followers to see so they know we are up to some hood s**t ".
There have to be some OG gangsters rolling in their graves at what these prima donnas are up to these days. Could you picture Stringer Bell putting his business on blast like this? Kids could learn a thing or two from The Wire.

That was outstanding...Anyone who needs a good laugh should check it out.

it's can be dangerous to judge people,including this guy, by his looks. Some of the toughest guys I've known in my life, and some of the most unstable and prone to violence, looked like innocent boy scouts and Harry Potter. I'm dead serious. I'm not ssying this is the case with this guy and his buddy, just ssying, that's all.

Of course they didn't find his salad

Of course they didn't find his salad - it was tossed!

Massachusetts law says that conviction of armed robbery comes with a minimum 5 year prison sentence. Are BB guns treated the same as handguns in this case?

Glad to see they were caught on what looked to be their first attempt at this.

Armed robbery is about the perception of threat, not the actual threat. Doesn't matter if it was a real, loaded, and functioning weapon, a real weapon but unloaded, or a fake weapon, if the victim thought they were in danger from an armed robber it's armed robbery.

He must role with The Highland Street Crips!

if it were an Elaine "Big Salad" perhaps it's a felony?

The BB gun they allegedly used They were just masks; not Michael Myers masks and the suspects weren't black as originally stated.

Yes, I've been told they're really William Shatner masks, because that's a thing these days, right up there with the creepier Michael Myer masks.

And, yes, the initial police broadcast was of two black males.

OK, can you maybe understand how, late at night, after interviewing a man who's still getting over having been held up at gunpoint (yes, replica gunpoint, but the charges are the same as if it had been a real gun) that police might issue a description of a "Michael Myers" mask? And it turns out the victim had a decentish description of the taller of the two, who turned out to have dark skin, but not of the shorter guy, who was apparently pretty pasty?

If only there were a Gotcha Awards, because you'd be at the top of the field right now.

Come on now, the suspect is

Come on now, the suspect is trying to eat healthy and exercising by running from the cops.....that alone is funny!