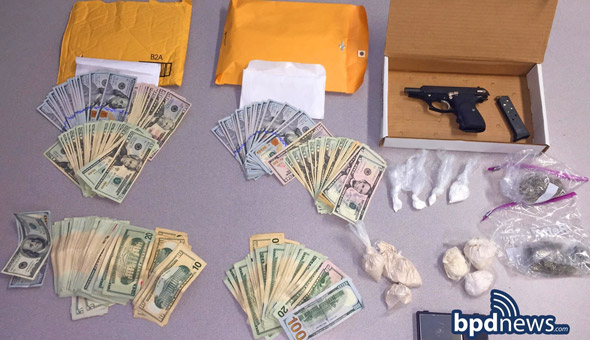 UPDATE: Judge Ernest Sarason set bail at $60,000 - prosecutors had asked for $100,000 - and ordered Fleurimont to wear a GPS device, the Suffolk County District Attorney's office reports. He's due back in court March 1.

In 2011, Fleurimont was arrested at 41 Colberg Ave. on similar charges after police seized heroin, crack, pot and a loaded handgun. He was convicted and sentenced to a 2 1/2-to-4 year prison sentence.

At the time of that arrest, he was out on bail on gun charges and robbery and drug charges in East Bridgewater.

According to the Suffolk County District Attorney's office, Fleurimont was on probation for the 2011 Roslindale arrest.

Stupid is all the people who

Stupid is all the people who bought $12,000+ of drugs from this guy. Or is it politically inappropriate to blame addicts who are 'victims'.

It's straight up inappropriate. Take a lap.

They should go easy on him

The law should go easy on him. While the display is impressive, it's not like he stole billions from investors or taxpayers and safely stashed it in an off-shore haven.

If he could've figured that out he'd be

...but that's not going to stop the gentrification of Roslindale. $445k for a condo on Washington St. with no parking.
$650k for a duplex on Birch St. Etc...

Nice to see our 'toughest in

Nice to see our 'toughest in the nation' laws are not so much paper tigers as purring kittens.

We all feel really safe in our neighborhoods thanks to your 'hard' work.

Dan Conley will be happy to know he can now

Why isn't he facing federal

Why isn't he facing federal charges? He could literally do life without parole under 18 USC......but they won't charge him. Gun control is about sticking it to right-wing voters and has nothing to do with crime control.

He'll turn his life around, I'm sure of it.

Hey Adam, any chance we could find out the judge(s) in Mr. Fleurimont's previous cases?

I need someplace to direct my rage.

Great game. You can either shoot a gun or

This MF needs to be locked up. For a long time.

12k in cash? Where does that

12k in cash? Where does that end up going? Does it just sit in an evidence locker forever or can the government make use of that (schools??)

Goes to cops and courts

at least the cops do their jobs.

I really need a copy desk

In editing the post, I inadvertently deleted a key fact: When he was convicted on the 2011 Roslindale charges, he got a prison sentence of 2 1/2 to 4 years, which he served. That was supposed to be followed by three years of probation. So he did do time; my apologies if the omission made it seem like he didn't.

I have to admit, I was with the "society is too soft on crime" crowd when I read the article at first, but now, yeah, that's probably what one gets for those charges.

Of course, they might be looking more towards the maximum end of the punishment now.

Hi Adam--It has been great

Hi Adam--It has been great that you've been including embedded maps on more posts recently! Please keep it up!

I thought that part of Rozzie was the "nice part"

it's way too close to West Roxbury.

Runs in the family..

His brother Tyrone was recently indicted on multiple gun and drug charges from an incident back in April of last year. Hopefully they go away for a long, long time.

These judges are too soft

GPS devices are a joke and should be destroyed. Jail, jail, jail