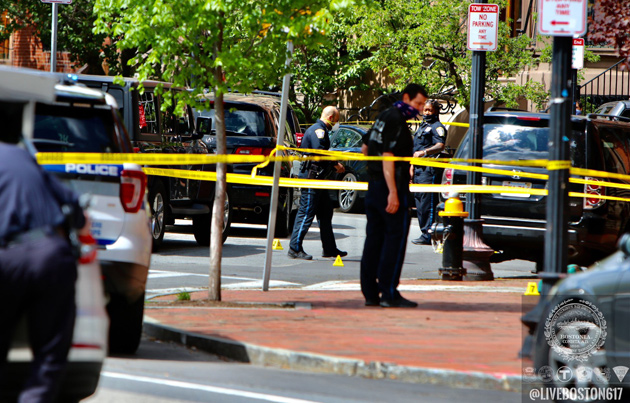 Update: Man gets 5 to 6 in state prison.

Police are investigating an incident around 2:15 p.m. in which they say a man shot at officers, who then returned fire, in the area of Chester Park on Massachusetts Avenue.

Nobody was hit, although a car was. One man was taken into custody.

One nearby resident reported at least nine evidence markers on the steps of 566 Massachusetts Ave. in Chester Park. Live Boston reports as many as 20 rounds were fired.

Boston Police report officers responded to 134 Northampton St., just before Shawmut Avenue, on a report of a man with a gun threatening people:

When officers approached the suspect in an effort to speak with him, the suspect, refusing to acknowledge them, took off running down Massachusetts Ave towards Chester Park. During the foot pursuit, the suspect produced a firearm and began firing rounds in the direction of the responding officers. In fear for their lives, as well as the safety and well-being of community members in the immediate area, officers returned gunfire. Undeterred, the suspect continued firing his weapon until his weapon reached the lock-back position which occurs when a firearm is completely out of ammunition. After a violent struggle, one in which the suspect continued fighting with the officers, the suspect was placed in custody.

What were they doing, laying down suppressive fire?

shooting a pistol is really not easy

At more than a few yards, moving target, high stress. Don't base your expectations on what you see in the movies.

. What were they doing, laying down suppressive fire?

I mean when someone is

I mean when someone is shooting at you and you have the capability to shoot back i think its reasonable that you do. Jesus F'in Christ.

Well if you read more about

Well if you read more about the incident you would have discovered the suspect unloaded a full magazine.
15 in magazine and likely a 16th in the chamber. You are a little too eager to blame the cops for all those rounds flying.

If only you had been there to

If only you had been there to show them how it should’ve been done.

A car was hit.

A car was hit.

Cops go, guy fires at cops and cops fire back (no one hit as adrenaline/distance factor in). Guy runs, cops run after him. Cops catch guy. Kinda like the movies.....

Pete, we need to listen to

Pete, we need to listen to Tim Mc! He’s a seasoned veteran of 1980s and 90s cop movies and knows EXACTLY how a person should react when responding to a 911 call for a person with a gun on a random early Saturday afternoon where the suspect then opens fire on you out of nowhere and tries to KILL you!

My question is why Tim isn’t teaching at the police academy. He would’ve killed this guy, walked away without turning around while something blows up in the background and done a barrel role over the hood of a car without even breaking a sweat.

- a Boston Cop (who would readily admit that being in a shootout would be incredibly traumatizing and never wants to kill anyone or be in a situation like this.)

"Nobody hit, man arrested" is the *good* outcome here

It's not that weird: outside movies, most people trying to shoot a moving target will miss. That nobody was hit is a good sign, both that the police weren't actively trying to kill the suspect rather than arrest him, and that they cared about not hitting unrelated bystanders. It also suggests that they cared more about *not being shot themselves* than about hitting their target, which again is a good thing.

I would much rather see a headline like that than "Police officer, gunman, and bystander wounded in gunfight" or "man with gun fires at officers, who fire back, killing him."

We really need to know how many shots were fired by how many police to understand whether there was prudential restraint in returning fire or a reckless amount of lead thrown downrange that we are lucky didn't hit anyone.

The police were sure to tell us that the suspect was beyond reckless in emptying his magazine. Unfortunately, it's not too surprising they aren't willing to share similar details about their own actions.

....unless, I suppose, there turned out to be good video footage of the incident.

I get that hitting an erratically moving target is *hard*, and there could be intervening objects that could get hit instead even if the aim is true. My concern is that they might not have been taking all that much care in aiming, and just sort of firing in that direction, possibly without much care to what was beyond the target. Such as other people. (Partly I'm thinking of this because of recent utterly reckless behavior of police in other jurisdictions, leading to deaths of innocent people.)

And maybe I'm just totally off-base, and this is a completely normal and valid number of shots to fire in this kind of fight. I don't have any experience in this. But it just seems odd!

(And to reiterate: I'm glad no one was hit.)

Ye shall not question authority

Every single time a gun is fired on a street in a city, it puts people's lives in danger. It doesn't matter whether that gun is being fired by a criminal or a cop, most of those bullets are going to hit something, and some of those things might be innocent people. The fact that the cups fired multiple shots here a) without hitting the target and b) with seemingly no effect on the number of times the perp fired his gun, definitely should trigger an automatic investigation into whether or not the Boston police were justified in using their weapons here. It seems to me that it ultimately contributed nothing useful to this exchange.

The question is whether it

The question is whether it can be demonstrated that shooting back provides a net safety benefit to both the officers in question and (crucially) the people in the homes behind the perpetrator (vs. say, just waiting for the perp to use up their ammo, as apparently happened anyway in this case).

Are you kidding me? I guy

Are you kidding me? I guy shoots at the police...no matter how many shots, and you question whether they should've shot back?

Why shouldn't we? Every

Why shouldn't we? Every gunshot in an urban area adds to the risk to innocent bystanders. It is also not at all obvious here that shooting back actually improved anyone's safety in this situation.

TV news showed a very frustrated Commissioner Gross speaking at the scene, denouncing the release of violent felons. Was this suspect part of the progressive, early release plan? Please update if possible.

Here we go. Knew this was coming.

Released from prison in

Released from prison in January, so it could not have had anything to do with the pandemic.

The only news story I can find on a Tyler Brown from Boston committing previous crimes is on this website, in 2014, for a double stabbing in Chinatown. Name and age match.

Well, he shot at police officers in this incident, so it's probably safe to assume he won't be released again any time soon.

I never tried running and

I never tried running and shooting a pistol/s.

That trick only works in movies.