Police: Guy runs Mattapan stop sign, gets stopped, gets arrested for all the fireworks and drugs and a gun in his SUV 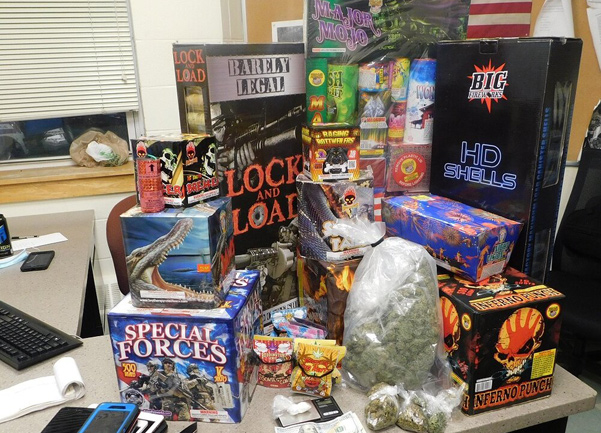 Boston Police report arresting a Quincy man they say was driving around Mattapan last night with a lot of fireworks, as well as cocaine, marijuana and a gun.

Police say officers on patrol in the area of Owen Street and Tiverton Road because of a gunfire report around 9 p.m. spotted two vehicles barrel though the intersection without stopping for the stop sign there:

Officers observed one of the vehicles, a Ford Escape, come to an abrupt stop with the second vehicle, a Nissan sedan, following suit. The operator of the Nissan exited his vehicle and entered the Ford, which proceeded onto Lorna Road to Morton Street and then back to Owen Street, eventually coming to a stop in front of 11 Owen Street. Officers conducted a traffic stop and approached the vehicle. Officers immediately observed a folding knife next to the gear shifter. Officers removed both parties from the vehicle and inside of the middle console, officers located a silver Taurus PT 92 AFS loaded with seven rounds of ammunition. The operator and the passenger were taken into custody.

it looks like this guy was a traveling salesman.

These police spreads always remind me of an attention-hungry dog bringing a dead rabbit into the house to gain praise from it's human.

If my dog was finding guns,

If my dog was finding guns, drugs and explosives in my backyard I would praise him or her endlessly.

Where are the fireworks

Where are the fireworks defenders? The people who say it’s just kids having a little fun? Because this isn’t the first time someone caught in Boston with fireworks is a grown ass adult with an illegal gun and drugs. These are the losers you are on the same side as.

You basically just said you

You basically just said you think BPD are doing a good job. Never thought I’d hear it from you.

How is it any business of

How is it any business of mine whether or not he has drugs? That has nothing to do with the problem of excessive fireworks.

You can get anything you want

How can you transport that much weed...