Six guns seized, three arrested in a park in Dorchester 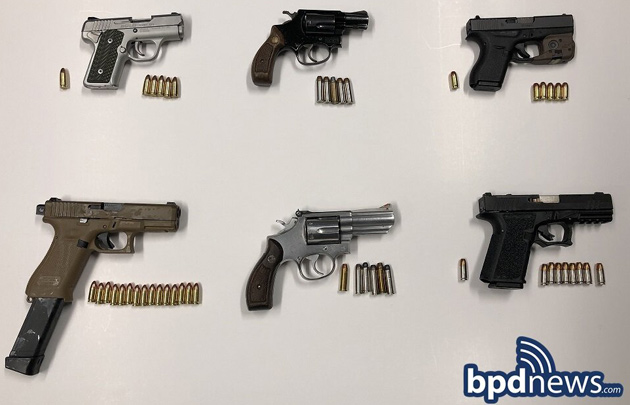 Boston Police report gang-unit officers looking for one guy they believed had a gun arrested two other men and seized a total of six guns after wading into a group of about 30 men gathered in Dr. Loesch Family Park - formerly Wainwright Park - last night.

Officers soon recovered a loaded .357 magnum Smith and Wesson revolver which had been discarded on the ground as well as a loaded .38 special Smith and Wesson revolver from underneath a parked car and a loaded 9mm P80 “ghost gun” (no serial number or identifying markers) from inside of a different unlocked and unattended motor vehicle. Several additional units were called to the scene to assist the officers with the group who were becoming increasingly more aggressive with the officers conducting the investigation, swearing and berating them as they attempted to safely recover the multiple loaded firearms.

As the officers continued their investigation, one of the males, later identified as Patrick Bishop, 21, of Chestnut Hill, attempted to break away from the group but was quickly stopped by officers on scene as he was observed discarding a loaded 9mm Kimber Solo Carry STS handgun which was quickly recovered by the officers.

The third man, Nathan Bootman, 23, of Randolph, was arrested after a frisk reveled "a loaded .380 Glock 42 handgun equipped with a Streamlight laser site" in a jacket pocket, police say.

Has been dangerous for many decades, now with just more firepower.

Just stop commenting about shit you know nothing about.

I grew up a 7 minute walk from there.

Go back to Utah or Ohio or wherever you are from, thanks.

.357 will work in any year just fine.
A full auto Glock, on the other hand, I wouldn't fire on a bet.

I think he was asking the Mr. "I Own Boston" boomer crank what year he was last near that park.

I'm sure you know nothing about these clowns either clown. They are a bunch of new dudes that are not originally from there. Stop believing everything that you read. Also this isn't a good job by the police. Because if they were doing a good job they would be arresting murderers which they can't seem to do for shit. Btw fuck bpd they expect citizens to snitch on each other but they won't snitch on each other. Oh almost forgot fuck wainwright too.

Take a look at the map: not a high crime area

I've been living across from the park since 1986. The park has had its ups and downs, but this is basically a quiet family neighborhood. I love living here. I've never seen anything like this most recent event. Glad it ended without violence.

I live about half a mile away and there were very loud fireworks coming from Dr. Loesch Park (formerly Wainwright Park) just about every night from Memorial Day to well-past July 4th.

Why were there 30 men

Why were there 30 men gathered? Was it a bball game or was it going to be a gang battle? What did I miss? Wainright is a small park to have so many in one place.

My oldest plays basketball there.

Is that a full auto select on the Glock on the left? If so, that's some serious firepower off the street.

Yes, that does appear to have a full auto selector on it, a bunch of them flooded into the country via a Chinese company recently. But no, its not a lot of firepower. A full auto Glock 19 is going to be insanely difficult to control, the person shooting it is most likely going to miss more then hit anything, be out of ammo in about 1.5 seconds, then be ammoless and defenseless. It shoots the same 9mm round irregardless of if it is full auto or semi auto, and a person properly using it taking aimed shots is going to be far more 'deadly' (thanks to accuracy) with one in semi auto then they will with full auto.

I wouldn't fire that thing from a vise with a string.

walked my dog there every day for 5 years

Gotta say I'm kinda surprised? I mean, I know that there was varying degrees of shadiness going on there (especially at night) but even still...

Not to be rude

Not to be rude but what did you think grown men do at park in night in Dorchester all these years?

Love Dorchester lived in Dorchester but you gotta realize. There are hundreds of unsolved murders on those streets. Literally.

surprising part about the arrest

A place I used to manage across the street from the J-Way had people who wanted to have their address changed to Chestnut Hill because they did not like being in the Whiskey Point section of Brookline. The Post Office firmly said shaddup.

The Post Office is currently defining 02467 as stretching all the way from north of Comm Ave to the VFW Pkwy in the south, part of Button Village in the east almost to Newton South in the west. That's some walk from the Chestnut Hill trolley stop.

When people say they are from Chestnut Hill or have Chestnut Hill written on their licenses is when they live on Byron Rd or Broadlawn Terrace.

Who say they live in chestnut hill?

No one says they live in Chestnut Hill though.

And they don't put it on their licenses unless they live in Broadlawn Park there. Maybe, just maybe someone from Independence Drive or the VFW there in Boston puts it on.

What makes it surprising to you

What if it was just one guy

What if it was just one guy with six guns?

No shots were fired. The police resolved the situation without incident.

Good to see the gang unit back out patrolling and investigating high crime areas and focusing on gang members with guns. I'm sure all will be released and live to shoot or get shot another day. All of the focus on reforming police and disbanding the gang unit is just making it more dangerous for the non-criminal element to live in these neighborhoods.

Which police reforms are making it more dangerous for the "non-criminal element to live in these neighborhoods."

So you saw this and felt safe??

@nona
You definitely don't know how the "gang-unit" operates. "Investigating" just means harassing and jumping out on black men for being outside and violating their rights by stop and frisking. Do you know how many times a day they do this and don't find anything? But when they do find something they blast it all over the place like taking guns off the street is providing safety for you. And how dare you speak about people you don't even know. "They'll be out to live to shoot or get shot another day"!?
Maybe if the city didn't spend 1 million dollars on renovating the park before Investing that into something the Black community actually needed maybe those individuals wouldn't be in the position they are in. So yes, I'm for dismantling the gang unit, BRIC, BPD and all other tools that have been used to disproportionately lock residents up from your so called "high crime areas".

Magoo is an avid flutist and wants to start fluting come evening among the streets of Boston, just like that bagpiper. But Magoo is kind of ascared to go fluting due to baddies out on the street. Will Magoo be safe? Magoo.