Man was hanging out in a Grove Hall parking lot with a gun loaded with 21 rounds, police say 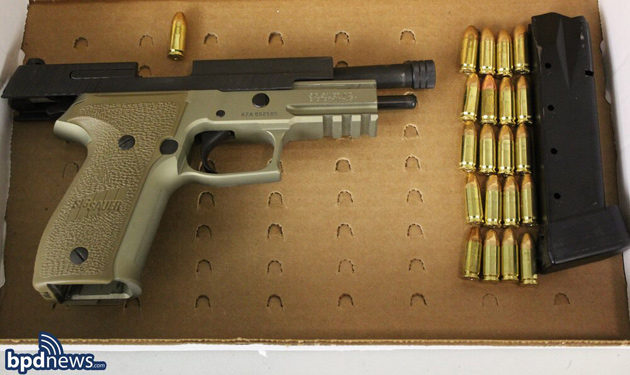 Boston Police report arresting a man they say was sitting in a car behind Flames in Grove Hall with a gun in his waistband loaded with 21 bullets early this morning.

Police say officers on patrol spotted a car idling in the parking lot behind 469 Blue Hill Ave. shortly before 3 a.m. Police say that when one of the officers made eye contact with the guy in the car, "he stared directly at the officers, then slouched forward, down towards the floor of the vehicle."

The officers decided to have a chat with him, police say:

Beauty of a sidearm, shame it was in the possession of a scumbag.

Not to put too fine a hollow point on it but...
The "bullets" are loaded.
Not the "gun".
Which is "UNloaded in the picture...

One wonders how many other people, not carrying unlicensed guns, they have stopped or forced from their vehicles and frisked just for looking at a police officer and then looking away, and then looking nervous during the interaction.

Is that kind of rights violation worth getting one unlicensed gun off the street? I don't know. Doesn't seem right.

Off The Street Is Good

Yes, the person was on private property (see parking lot behind Flames line), thus the police had reasonable suspicion or is it, and I mean this in the most insulting way, all academic to you?

Is that really enough?

Genuine question, is "being on private property" actual reasonable suspicion? Did Flames ask the police to stop anyone sitting there? How do they know the guy didn't work there or was waiting for someone who did? Seems like we're all on private property quite a lot of the time we're out and about (capitalism being what it is), so I'm not sure I'm comfortable with that being the starting point for police suspicion.

You have to be 21 to rent a car in Massachusetts.

Hate to be a spoil sport but at 3 AM a kid younger than my son in a rental behind a closed restaurant might just mean he may be waiting for his friends to get off work or it might mean nefarious behavior. Are the cops perfect? No not at all. There is at least one Q person on my town's force but the cops are trained to look and say; Hmmm 3AM, car with no dealer markings, a rental, behind a restaurant in an area known for occasional bad behavior. I give them the benefit of the doubt here. Most are not blockheads. Some are.

Sorry about that capitalism thing. Adam - Would you mind terribly blocking the ads on Failed Bus's page? He hates capitalism.

Nothing notes the 19 y/o was

Nothing notes the 19 y/o was driving or in the drivers seat of the vehicle. The lack of any vehicle-related charges adds to the question.

You also dropped a Q person being on the police force too casually, you should be horrified. Someone who can't suss out lies and conspiracy on that level shouldn't have that kind of power or control over people.

Making a lot of assumptions about known facts here

How did the cops know this person was under 21 until they decided to investigate?

How did the cops know its a rental until they decided to investigate? Every rental I've ever had hasn't been marked as such - I don't know how you'd know without running the plates or maybe getting close enough to see the little bar code in the window (and as far as dealer markings go, I've never owned a car with any since I make the dealers remove them, and I doubt I'm the only one there). And in any case, I don't see how sitting in a rental car is more suspicious than sitting in any other car.

Seems like you're working backwards from "well they found this stuff so the investigation must have been legit" rather than asking "is it fair to be able to search someone on the basis that they look like a young person sitting in a car behind a private business" - I'm not sure the latter actually is or should be the case.

How often does this happen where the police decide to stop and search someone for look at them suspiciously, and don't find anything? Seems like they're not likely to advertise that as much.

That's what I meant, but it wasn't as clear as it could have been -- I've put some emphasis on the original.

Wow, didn't know looking at police was a primary offense, very cool. Will avoid making eye contact & acting nervous when I am out past sundown, duly noted.

Was this kid even in the drivers seat? I can imagine the scenario where he's waiting in the car for the friend to come back and the friend comes back to an empty vehicle.

Decent potential to get this gun charge dismissed (IANAL)

Proven unlawful possession of a firearm was supposed to be an automatic 1 year term in MA unless they repealed that particular law somewhere down the line. Does anyone know if it was repealed?