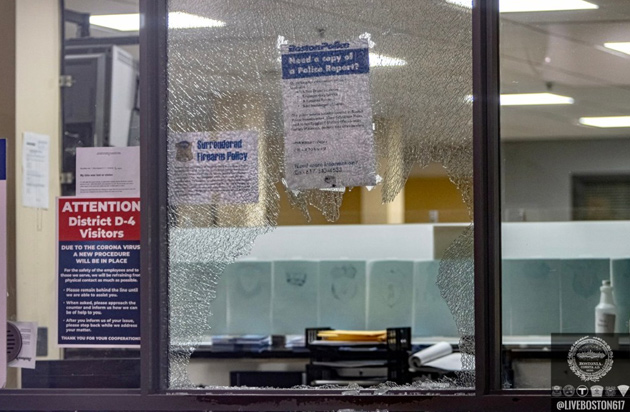 Live Boston reports that around 7 p.m. on Saturday, a man walked into the D-4 police station on Harrison Avenue in the South End with a pole, which he used to smash the window separating him from the officer working the desk and then dove through the window and attacked her.

A violent struggle ensured and finally the man was taken into custody.

The officer suffered only minor injuries.

either insane or trying to get arrested or both

Although if they were trying to get arrested for food/shelter, you'd think there are less violent ways to go about it.

Check this out, from the linked article:

Another lesson to take away from this horrific incident is how these attacks on officers have continued to increase with 44 officers already given their life in the line of duty this year in the United States. It is important to recognize that the current anti-police culture perpetuated by so many politicians have real world consequences. When our elected leaders vilify officers and encourage violence against them it is just a matter of time before lives are lost.

This is just full of lies. Of the 44 officers killed this year, 24 died of COVID! [source: https://www.odmp.org/search/year/2021] It's true that COVID is taking a serious toll on police officers that governments need to take seriously. This obviously has nothing to do with "the current anti-police culture perpetuated by so many politicians;" conflating BLM with COVID deaths is just plain dishonest, and is unusually disgusting even by the standards of the awful people who run Live Boston.

And it's not remotely true that BLM or related protests have led to more violent attacks against cops. Cop deaths due to (non-accidental) gunfire since 2012 [from the same website as above]:

There just isn't a pattern here. It's contemptible and anti-democratic to suggest that politicians like Cori Bush are somehow responsible for a nonexistent increase violent attacks against cops, and just plain pathetic to use an isolated incident at one BPD station to tar civil rights activists.

I am aware Adam knows better than this. But I don't think Live Boston deserves the link if they're going to push horrible lies.

Police have transformed into

Police have transformed into an occupying military force over the past 40 years but act like victims any time that the subjugated population lashes out.

Although, to be fair, an "occupying military" would be subject to the Geneva and Hague conventions, neither of which apply to police.

I guess I'm saying that maybe a good first step in curbing violence is to stop literally waging a war.

I couldn't have said it better regarding Live Boston...

Why won't our politicians

Why won't our politicians stand up to Osama Bin Laden? (One of the 44 deaths so far this year is 9/11-linked cancer.)

Live Boston is often the only group making these reports. I would rather know (and the public know) than to ignore their reports and pretend these things aren't happening.

I'm very critical of policing which is why I always read stories written by pro-police groups with a high degree of skepticism. But that said, I don't blindly agree and support anti-police groups either.

I probably shouldn't respond to this...

...since you are just sanctimoniously trolling, but there's a lot of ideas here that needs correction:

Live Boston is often the only group making these reports. I would rather know (and the public know) than to ignore their reports and pretend these things aren't happening.

OK, I will grant you that Live Boston is probably the only source with this story. But is this really a story that the public desperately needed to know? It's hardly an important event in the history of the BPD. It's basically a special interest story, but infused with twisted, violent propaganda. More importantly - the story actually misinforms the public - while the fact of the violent assault is true, the overall story of increased violent assaults due to BLM politicians is howlingly, dangerously false. It's really inexcusable.

And "pretend these things aren't happening" is just bad faith on your part. Nobody is asking anyone to censor this news or to pretend that cops aren't sometimes violently attacked, we just don't want it served along side a heap of egregiously dishonest propaganda.

But that said, I don't blindly agree and support anti-police groups either.

While I am sure this makes you feel better about yourself, it's completely irrelevant to the conversation. If an anti-police group lied as baldly as Live Boston did, then yes, they shouldn't be supported. What exactly is your point?

I didn't say COVID deaths should be ignored! In fact I said the exact opposite. What I said is that COVID deaths shouldn't be dishonestly conflated with violent murders in order to justify increased police brutality. Your (idiotic) analogy is like if the NRA said "X grocery workers died in 2020" and "because of this increase in deaths, violent attacks against grocery stores must also be increasing and they should be openly carrying guns to protect themselves."

Also, does the figure of 44

Also, does the figure of 44 include the two officers who on-duty defending the Capitol on Jan 6th and died since then of suicide?

No, it does not, because for

No, it does not, because for now at least, they are not considered line of duty deaths. There is an effort to have that changed: https://thehill.com/homenews/news/538622-families-seek-line-of-duty-reco...

Agreed with all of this

Yes, Live Boston is often the only one covering these occurrences and providing these great photos (though Jesus Christ, could some of them tone it down with the oversaturated bad HDR?), but the viewpoints they promote are horrible. Maybe Adam could post a disclaimer every time, like, "Live Boston was unfortunately the only source of a photo for this occurrence, and we thank them for taking the photo, while continuing to hope they'll cut out the turtleboy bullshit."

Personally I think he was

Personally I think he was trying to "Stop the Steal". But seriously It's a risk all police officers take when they put on the badge. There are crazy people out there that want to hurt them. Always have been, always will be.

That he felt bad about missing the bus on the 6th, and decided to have his own, condensed Trump rally right at home.

She should have shot him!!!

He’s a lucky SOB. Imagine working in front of a glass shield and someone comes in smashing it with a pole. She was definitely in fear of her life. AND IT HAS NOTHING TO DO WITH RACE if she was white and he was black. If this was the situation, you know everyone would have a heart attack and say she was scared because he’s Black. I’m Black from Dorchester and I definitely wouldn’t have had a problem with her shooting him.

What happens when you are being attacked at close range and pull out your gun?

You can get shot with it, that's what. It ends up being a wrestling match over the gun, and the odds are not good.

just shoot everybody. As it turned out, they didn't need to be shot and there were only minor injuries. Not every situation deserves bullets.

Nothing to do with race

Everything to do with not getting shot.

If a perp is on you already, unholstering your weapon is a really bad idea because they have a good chance of using it on you or causing a fatal misfire.

That's one way cops get shot with their own guns.

The fact that person still alive

The fact that the person who committed this brazen act inside a police station and wasn't shot, is still alive, speaks volumes.

Its a dangerous job

Policing is a dangerous job but not as dangerous as a 7-11 worker or a substitute teacher in the Boston Public Schools. I'd also place driving a T bus or being a nurse at Boston Medical in the more dangerous category.

Garbage collectors are 8 times more likely to die on the job than police officers.

Garbage Collectors do not have to deal with the ZachandTireds of the world. Garbage is sometimes easier to deal with.

Neither do police. I stay as far away from you psychos as I possibly can. Garbage collectors actually provide a valuable service to their communities.

I guess that explains it

The police simply do not know how to take out their own garbage.

But we already knew that.

If you take out your gun,

If you take out your gun, shot it.
That's the only reason to take it out.
No other reason.