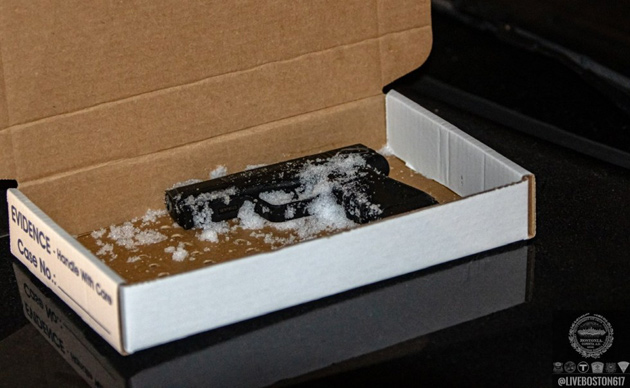 Gun after it was retrieved from the snow. Photo by Live Boston.

Aguinaldo Gomes-Soaresrosa, 21, of Dorchester, faces a variety of charges following an incident early Monday in which he responded to a traffic stop by putting his car in reverse and hitting the gas - briefly dragging the police officer who tried to shut off his ignition.

Boston Police report officers had pulled Gomes-Soaresrosa over at Washington and Brimsley streets around 2 a.m. for an equipment violation, when he put his transmission in reverse:

One of the officers reached into the vehicle and attempted to gain control of the suspect as he began to accelerate. That officer was briefly dragged alongside of the vehicle until he was able to safely disengage and roll away, somehow avoiding injury.

Police say officers caught up with his car a little more than half a mile down Washington, at Park Street, and then followed footprints in the snow leading away from the newly crashed vehicle to arrest him a couple blocks away on West Tremlett Street, near Whitfield Street.

Officers later recovered a loaded .40 caliber Taurus PT 24/7 G2 handgun which had been discarded as the suspect fled.

First and foremost I would like to think those offices for their continued great police in an our City of Boston.

the work that you've been doing and removing these firearms off the streets the city of Boston have been simply incredible dynamic superb, and as a resident I am grateful for your work and I appreciate you.

However, I do have concerns about law enforcement offices reaching in to shut off a motor vehicle. there have been countless cases of offices attempting to shut off a motor vehicle and being dragged to their deaths or severely injured. we don't need one of those incidents here in boston. If there's a way that you can avoid sticking your hands into a car to shut the engine off by the key I recommend you do so.

I pray that the officer that was dragged by this perpetrator will be safe and is recovering as a taxpayer I want to give this officer two weeks off paid.

is going to melt that snow but im sure they can just tell the judge it was one of those snowy new england days!!!!

Saw the photo before anything

Saw the photo before anything else and briefly thought "why are there soap suds on that gun?"