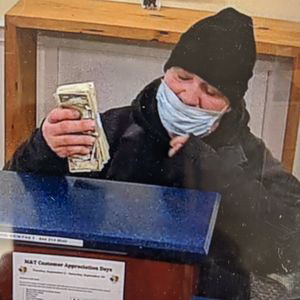 A man first charged with robbing banks in the 1980s was ordered held in lieu of $50,000 bail today on charges he robbed three banks in the Back Bay over the past couple of weeks, the Suffolk County District Attorney's office reports.

It turned out that members of the FBI's joint violent-crime task force were waiting for him at the Citizen's branch - which they had staked out after the two earlier robberies - the DA's office reports:

Task force members saw the man, identified as Sequeira, walk from one teller’s desk to another repeatedly demanding "give me hundreds" and placed him under arrest.

The DA's office said that in the robberies last week, Sequeira threatened to shoot tellers if they didn't give him money, specifically, hundred-dollar bills. He made $590 in the first robbery and left the second bank with $388.

In 1989, Sequeira, then living in Lynn, was sentenced to 9 1/2 years in prison after he was convicted in federal court for robbing 12 banks in the Boston area. After his release, in 1997, he and two other man were arrested on charges they held up a bank in Cranston, RI at gunpoint. They were caught when the get-away driver spun out on I-95 near the Connecticut line.

Sequeira pleaded guilty, again in federal court, and was sentenced in 1998 to nearly 27 years in prison. Late in 2017, however, a federal judge vacated his sentence. The court ruled that his sentencing, which used his declaration as an armed career criminal under Massachusetts state law no longer applied, after a 2015 Supreme Court ruling, because the way Massachusetts defined armed robbery did not make it a federal "crime of violence" that could be used to increase a person's federal sentence as an armed career criminal.

Time to check into a nice warm room with three squares a day.

He should get a new sentence of another 27 years in prison, this time it won't get vacated.

I'm'a go out on a limb here

I'm'a go out on a limb here and say this guy is not great at robbing banks.

Did they recognize him

Seems this is all he knows.

It's all he knows, and he's

One of the most foolish crimes

From a risk/reward materialist perspective. Robberies in general, but especially bank robberies because of the cameras, dye packs, armed guards, and federal enforcement.

This guy got a pathetic return for the risk of a very long prison sentence.

Unless you're smart and resourceful enough to implement a scam, shoplifting gives a much better risk/return. Larceny under $1200 is a misdemeanor, and you will have to be caught dead to rights several times to do any time, and even then only House of Correction.

Never be violent or threaten violence.