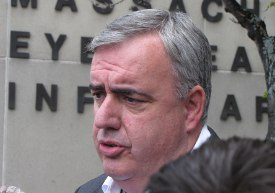 Davis outside the hospital.

A Middlesex County prisoner about to get medical treatment at the Massachusetts Eye and Ear Infirmary managed to grab a deputy sheriff's gun and shoot him. A second deputy then shot the prisoner in the chest, Boston Police Commissioner Ed Davis said today.

According to Davis, the prisoner, from a Middlesex County correctional facility, arrived at the Mass. Eye and Ear emergency room shortly before noon, with two armed deputies, for treatment of an unspecified condition.

As his handcuffs were being removed, he began to struggle with one of the deputies, the two fell on the ground and he grabbed hold of the deputy's gun, which fired into the deputy's leg, Davis said.

The other deputy then opened fire.

The prisoner is in critical condition at the neighboring Mass. General Hospital, Davis said. The deputy, in much better shape, was also treated there.

The emergency rooms at both hospitals were briefly shut to the public as local, state and even federal law-enforcement officers raced to the scene.

But he swore it was in self

But he swore it was in self defense ...

It was possibly in self

It was possibly in self defense, though no judge would ever allow a jury instruction to that effect.

When you are being kept as a slave and you have a chance to take down one of your taskmasters, I think that is justifiable.

"kept as a slave"

Methinks somebody didn't get the reference

No, he swears he didn't shoot

No, he swears he didn't shoot the deputy.

but they say it is a capital

but they say it is a capital offense.

(May be true in real life)

Shouldn't the question be:

Shouldn't the question be: why wasn't the deputy paying attention?

Shouldn't we wait until all

Shouldn't we wait until all of the facts are released before we judge that he wasn't paying attention.

If the information released is correct, then it sounds like the struggle began when the restraints were being removed. I'm sure the officer was at a tactical disadvantage when removing the restraints, I'm sure his hands were both busy, while the con had a free hand available to make a move.

dont they train these guys on how to keep the prisoner they are uncuffing from getting a hold of the officers gun? i would think this kind of training would have been covered at the academy. seeing that they do have to put handcuffs on and remove them quite a bit. it would probably be helpful to figure out a way to keep the prisoner from getting your gun and shooting you in an emergency room full of innocent bystanders waiting to receive medical attention.

also, was this officers gun in one of the lock holsters that kept terrorists #1 and #2 from getting the late officer collier's gun free from his holster?

im guesssing they are discussing the further training of their officers over at middlesex sherif's dept this morning.

the general public cannot understand how dangerous day-to-day work is for health care providers. i have worked in a boston hospital for over a decade and have witnessed many assaults on staff and patients by other patients. the police, under pressure to not prosecute the mentally ill who commint crimes, bring all sorts of violent individuals to our emergency rooms and we have to treat them. it is always scary to me when 4 or more boston police officers (equipt with guns, clubs and handcuffs) bring in patients to us and one or 2 female staff are supposed to treat them with just just TLC. the police leave and we are left to subdue and treat these frightening individuals. it is scary. as a city we need to figure out how to deal with folks who are criminally minded, violent and sick before there are other incidents such as the one in this article.

"I see nothing! I hear nothing!"