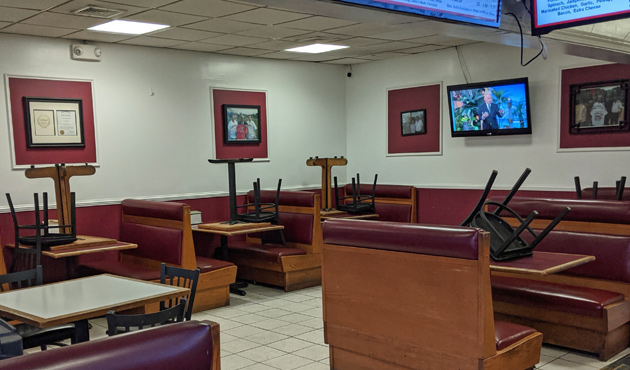 The dining area at Deno's on Centre Street in West Roxbury was already closed off this evening.

The Zoning Board of Appeal today approved plans by Pat's Pizza, 2254 Dorchester Ave., to expand into a neighboring building to allow for more kitchen space and seats. Read more.

Uno now zero in Back Bay

Boston Restaurant Talk reports the Uno Pizzeria and Grill on Boylston Street has closed for good, leaving just one Uno left in the entire city (plus its headquarters, in West Roxbury).

The pizza place had asked for permission to extend its licensed closing time from midnight after being cited by police in May for staying open past midnight.

In the City that Always Sleeps, you don't just start selling pizza after midnight because you want to

A Washington Street pizza place that has been staying open until 4 a.m. even though its license calls for a midnight closing was scheduled for two hearings before the Boston Licensing Board this week - one to answer to a citation issued by police , the other to formally ask permission to stay open to, if not 4 a.m., at least 3 a.m. Read more.

A squirrel in a tree eating pizza

DeFina, who grew up in Roxbury and graduated from the Boston Trade High School, opened DeNo's in 1983.

Boston Restaurant Talk reports that Bianchi's could re-open in the Lewis Street site left vacant by the closing of JD's Sports Bar.

WCVB reports Dedham-based Papa Gino's closed dozens of branches today, at least in some cases with no advance notice to workers. And even as workers were finding out they had no job, the chain was tweeting out some promotion. Probably not a good idea.

The owner of Village Pizza and Grill, 56 L St., has agreed to pay back wages to workers not paid time and a half for working overtime and to pay fines for letting teens work excessive hours and sometimes with hazardous equipment. Read more.

Murals where you least expect them: Inside pizza places

You can work up an appetite driving sort of aimlessly around - especially if you forgot to eat lunch - so when we saw the Pizza Stop on Cypress Street in Brookline, we pulled over and went in - and were immediately struck by the large sorta-Lichtensteinish mural on one wall (especially impressive given that the whole place is really tiny).

Compare to the Phaeton legend painted on a wall at Nick's on Washington Street in Roslindale: Read more.

Boston Magazine reports that Bertucci's has filed for Chapter 11 bankruptcy, which means the chain can stay open - but can renegotiate leases and stuff, and might close some additional outlets. Another pizza chain based in the area (Uno's - yes, Uno's is headquartered in West Roxbury) has used Chapter 11 in the past.

No more Bertucci's in Kenmore Square

Boston Restaurant Talk reports the Bertucci's in Kenmore Square has shut - it couldn't renew its lease with the current owner of its building - which is getting ready for a major redo of that block.

This morning I watched four Seagulls get into a knife fight on Causeway Street over sidewalk leftovers from Halftime Pizza. Yes it's that good.

The non-profit Haley House is announcing the impending shutdown of its Dudley Dough pizzeria in the Bolling Building in Dudley Square. Read more.

Can pizza make you lose your mind?

Opponents of a pizzeria planned for Harvard Square are now accusing the place of fostering a race war and encouraging people to mainline heroin, Cambridge Day reports.

Cleveland Circle pizza place gets six-day suspension for yet another underage drinker; could face roll back in hours

The Boston Licensing Board has ordered a six-day license suspension for Agoros Bar and Grill on Chestnut Hill Avenue after yet another hearing on a young'un found with a drink in hand. Read more.

A Domino's driver was beaten and robbed of his pizza, money and car on Florence Street near the Flaherty Pool shortly before 9:30 p.m. Police recovered his car on Florence at Cummins Highway. Suspects were described as three black males in their late teens or early 20s, one in a black hoodie, another in a gray hoodie.