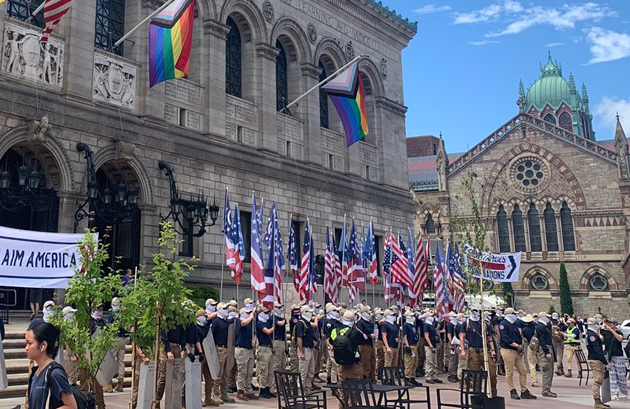 Nazis under flags they couldn't tear down in Copley Square. Photo by twonickles.

Update: They even used a U-Haul in Boston, but to haul away their riot shields.

Twonickels sums up the scene in Copley Square this afternoon: Read more. 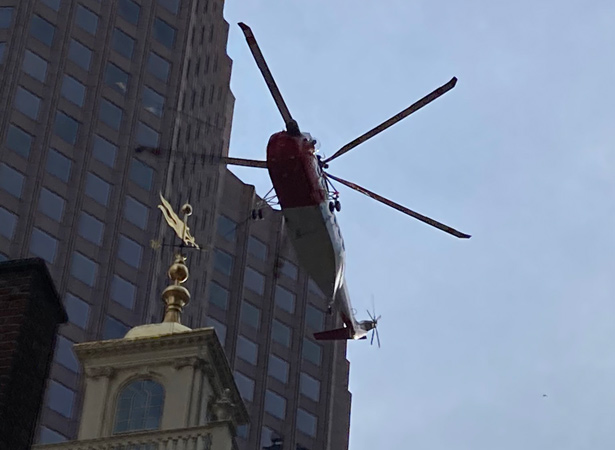 Sarah Smith got a good, close look at the underside of a helicopter over the Old State House today. She says State Street was closed and that it might have been Life Flight doing some pre-Marathon practice runs. 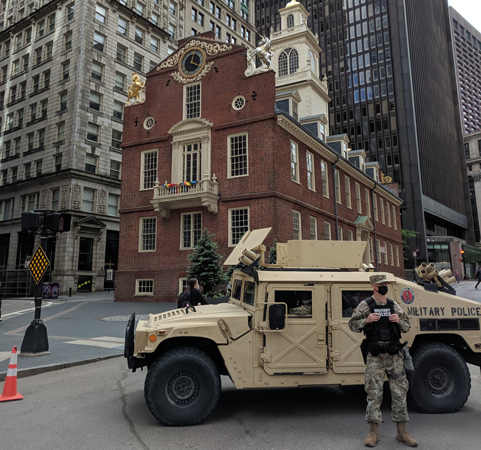 Jake at HUB History took this photo today as crowds gathered at City Hall Plaza for the latest vigil and march. You would think a National Guard unit in Massachusetts, of all places, would know the significance of the large circle in front of the Old State House and not park an armed soldier and battle-ready Humvee right where authorities killed a black man, triggering events that ended with a revolution. 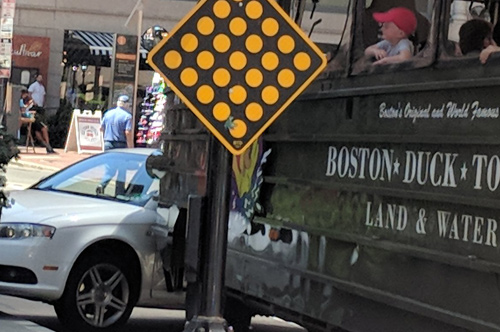 Proclaming independence in a liberated town

The first ever reading in Boston. Image from the National Archives.

On the afternoon of July 18, 1776, Col. Thomas Crafts walked out onto the balcony of what was then called Town House and read a declaration that had been signed by representatives of the 13 colonies two weeks earlier in Philadelphia. Read more. 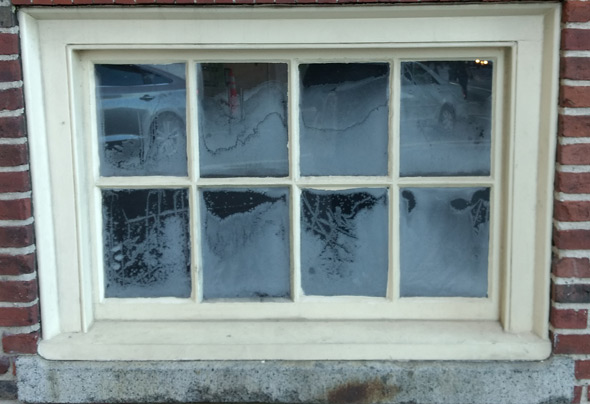 Our own SwirlyGrrl spotted this window on one side of the Old State House this morning. 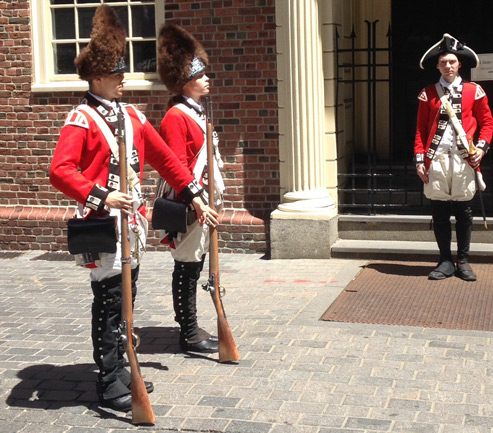 Liam Sullivan reports somebody yelled "You need to Brexit!" at these Redcoats standing guard outside the Old State House today.

Earlier:
Even Redcoats enjoy a tea party these days.

Sadly, Redcoats rarely have dollars on them 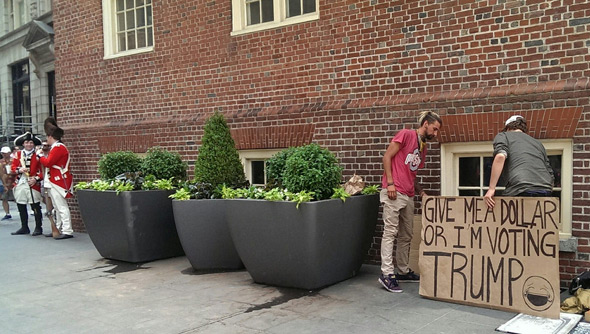 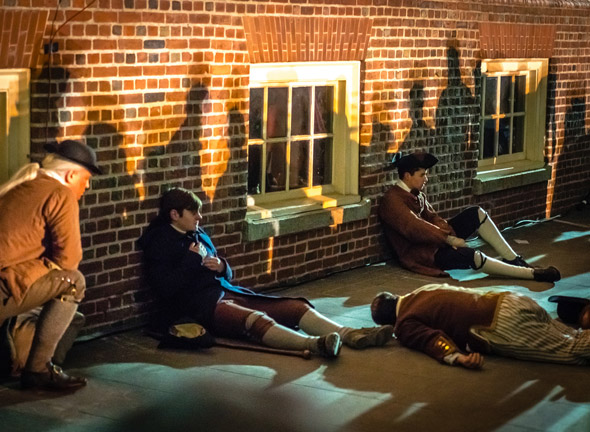 Matt Conti took in the Boston Massacre reenactment at the Old State House.

Only so many subway riders can squeeze on a bus 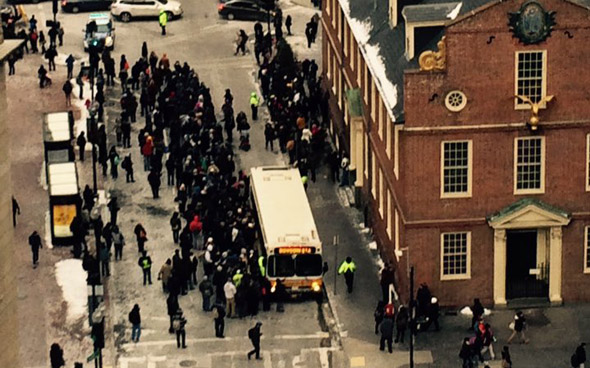 Beth Gavin gives us the bird's-eye view of Blue Line riders trying to get on one of the buses running instead of trains due to the investigation into the shooting at the Maverick Square T stop.

Citizen complaint of the day: Man just wants to bang on the drum all day

Currently (and often) there is a street performer who bangs on overturned plastic drums at the boston massacre site. it's loud and annoying -- i live 23 floors above it, and the noise still infiltrates my apartment -- and it drives tourists away from this historic site. i see them scurrying past and covering their ears, from my window. i can't believe the city allows this. 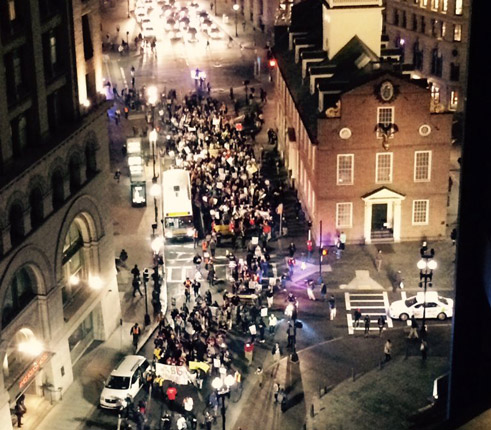 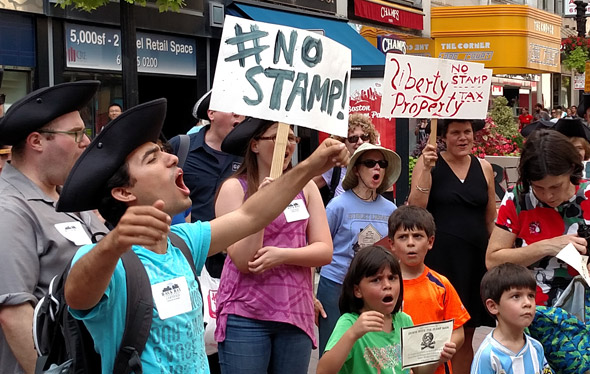 Andrew Oliver, appointed by His Majesty's Government to enforce and collect the stamp tax on all paper products, today announced his resignation from the position on the steps of the Old State House after a rabble of protesters marched his effigy around the town, put it on "trial," found it guilty and ripped it to shreds. Read more.

The lion in fall

Leslee watched the refurbished lion being re-installed atop the Old State House today - complete with a new time capsule.

Posted under this Creative Commons license in the Universal Hub pool on Flickr.

The Bostonian Society took down the lion and the unicorn from the Old State House today for renovations. Jocelyn was there to watch them cage the lion, no doubt to make sure he didn't escape and try to re-assert his royal authority over the colony.

The lion and the unicorn coming down

Boston Magazine reports the Bostonian Society is taking down the two symbols of British rule from the Old State House for repair.

The recruit warily eyed the rabble

Arturo Gossage attended the recreation of the Boston Massacre outside the Old State House last night.

But where does he hibernate?

Keytar Bear has been making the rounds of downtown and Back Bay T stops, but he came above ground today to play and mug for the camera by the Old State House, where Jocelyn snapped his photo.

If you were marching around all day in a heavy woolen uniform, you'd get a little cranky, too