Oopsies: Driver plows into Morrissey Boulevard drawbridge while it's up

There's probably a good reason a driver heading south on Morrissey Boulevard this afternoon missed the warning siren, the flashing lights and the gate and plowed right off the road and into the bridge. Or as MassDOT put it so delicately: Read more.

Citizen complaint of the day: Eldridge terror in Jamaica Plain 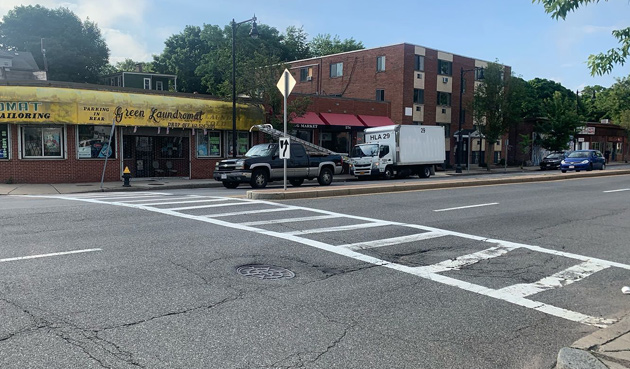 A concerned citizen files a 311 complaint about the crosswalk on Hyde Park Avenue at Eldridge Road in Jamaica Plain:

Every time a person crosses the street you get trapped in the middle of Hyde Park Ave terrified you're going to get run over. Vehicles do NOT stop for pedestrians. Please do something to force vehicles to stop for pedestrians before someone gets hurt.

Driver races away from police, rolls over, crashes into light pole, runs away without helping seriously injured passenger 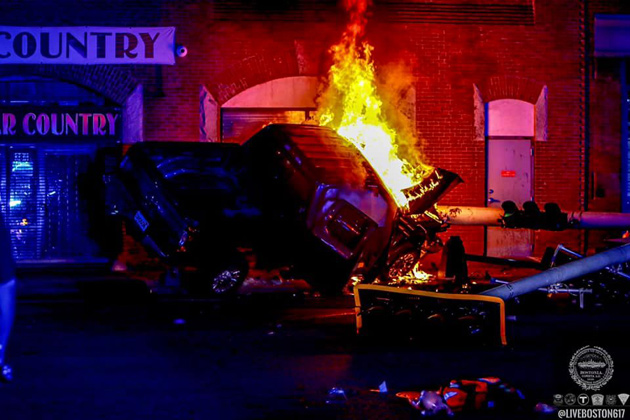 Live Boston reports that after the driver of a pickup truck sped away from an attempted traffic stop near BPD headquarters early this morning, officers pursuing him were told to stop chasing him, but the guy just kept going - until he apparently rolled over the pickup at MLK Boulevard and Warren Street, crashing into a traffic pole as the pickup burst into flames. Read more. 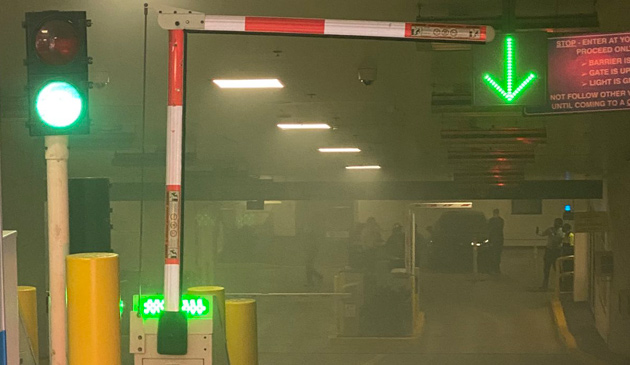 The Boston Fire Department reports a car caught fire three levels down at the 1 Lincoln St. garage around 9:20 a.m. The fire went to two alarms as smoke filled the garage. Read more. 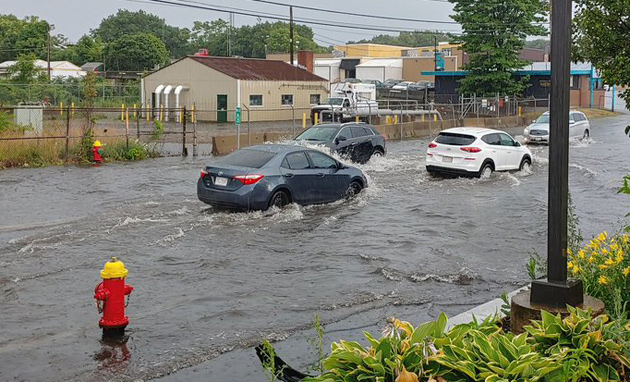 State re-opens road next to Jamaica Pond to traffic

Parkman Drive is once again open to cars, seeing as how there's no longer any need to provide extra space for walkers and joggers around Jamaica Pond, or something. In any case, DCR said it was removing the barriers tonight.

CommonWealth reports MassDOT is looking at a new alternative for rebuilding the turnpike while maintaining train lines, Soldiers Field Road and bike and pedestrian paths in a space just 204 feet wide just past where the Allston/Cambridge tolls used to be. Read more.

Truck rolls over on the Expressway 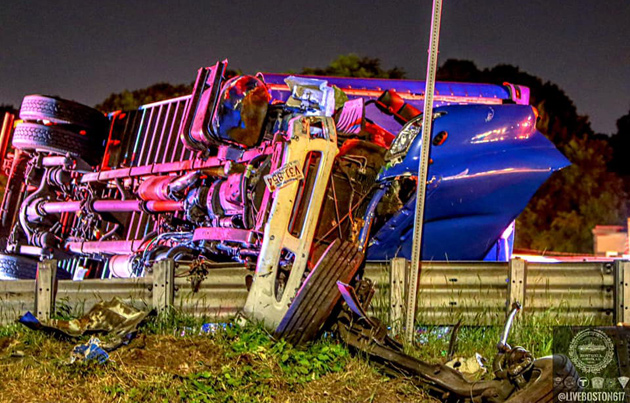 Live Boston reports that just before midnight, a tractor trailer headed north on I-93 flipped over near the Morrissey Boulevard exit. The driver was taken to a local hospital with injuries not considered life threatening.

Looks like Lake Street in Brighton got extended out onto Comm. Ave. today

Erin Larson could only watch in amazement as motorists tried to ford an impromptu lake on Commonwealth Avenue near Chestnut Hill Avenue this afternoon: Read more.

Proposal would narrow road space on Charles Street to allow for more space for bicyclists, restaurants

The Beacon Hill Times reports on a proposal for Beacon Hill's main commercial street in the time of Covid-19.

Shortly before 10 p.m., somebody drove a pickup onto the Needham Line track at Bellevue Station off Belgrade Avenue, then ran away. Police found him not long after across Belgrade Avenue on Iona Road. Read more.

Driver hits, drags pedestrian down Brighton Avenue in Allston, then drives away

Sean Olsen reports that a driver hit and dragged a pedestrian down Brighton Avenue inbound just before Packards Corner. The pedestrian suffered major head trauma and the police homicide unit was called in due the severity of the bicyclist's injuries. Around 7:30 p.m.

WCVB reports that although it initially appeared a bicyclist had been hit, the bicycle belonged to somebody who stopped to help.

Driver slams into Jamaica Plain market; fireworks might have been involved 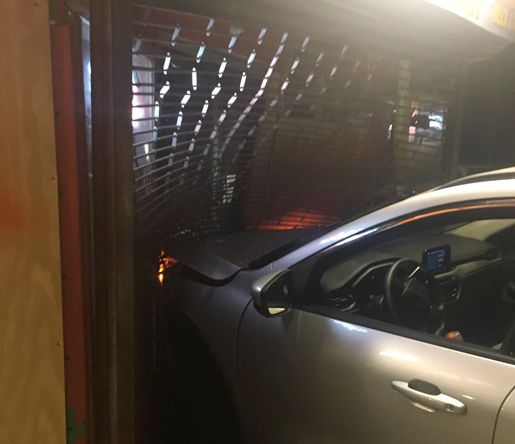 Around 11:20 p.m., residents living in the area of Centre Street near Creighton and Wyman streets heard what sounded like a simultaneous car chase and gunfire. Read more.

Catherine Parrotta shows us the sky-eye view of a truck wedged good and tight under Mass. Ave. on Storrow Drive inbound this morning. 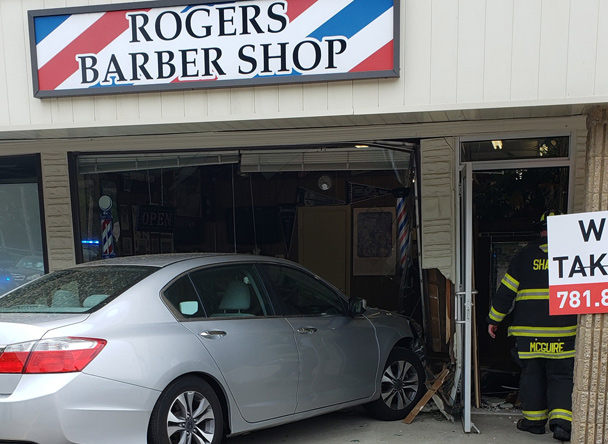 Sharon Police report no injuries when a motorist turned a South Main Street barber shop into a drive-thru this morning.

Mayor Walsh today announced a new program called Healthy Streets to get more people biking and riding the bus - with plans to figure out how to let restaurants add new outdoor seating.

Walsh said the city is laying new bike lanes to connect downtown with the city's existing bike lanes in the South End and the Back Bay, by using traffic barrels and signs on: Read more.

Brookline announced this morning it's going back to being a stern parking taskmaster, now that offices and stores are, even if slowly, re-opening. Read more. 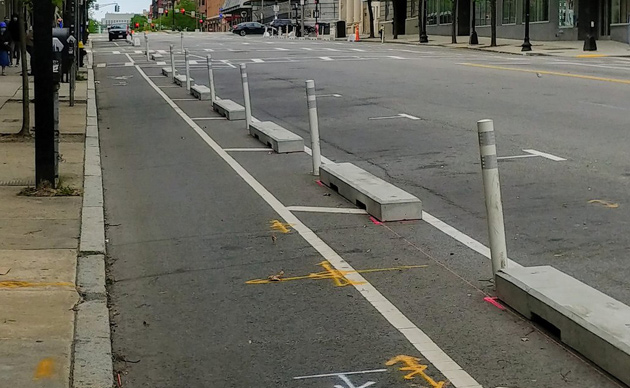 Scott couldn't help but notice the new concrete barriers lying amidst the plastic flexposts that motorists love to knock over and park on along a section of the Massachusetts Avenue bike lane south of Boylston Street. 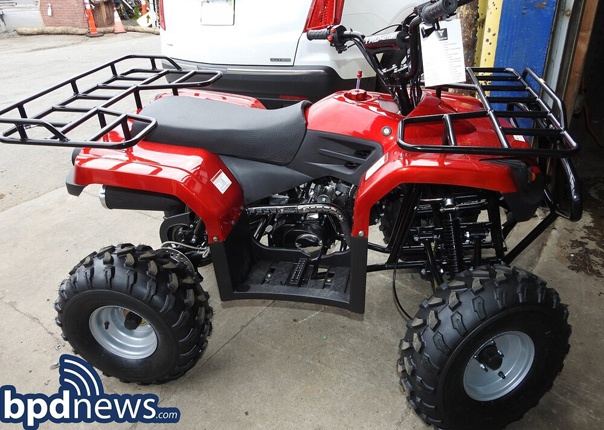 Boston Police report a weeklong crackdown on weaving, stunting dirt bikes and ATVs and their drivers.

Between May 8 and May 15, police say, they arrested 18 people and seized 30 dirt bikes, mopeds and ATVs. Read more.

Cambridge Police report 11 cars were broken into by somebody who gained entry mainly by smashing in the front passenger window, sometime overnight from Friday into Saturday. Read more.