The Boston Sun reports plans for revitalizing the dreary Charlesgate under and around the Bowker Overpass that connects Storrow Drive to the Fenway now include a half-acre dog park that would have separate areas for both canine introverts and extroverts.

Around 9:40 p.m. Boston firefighters found the driver on top of her car and got her out of the water. 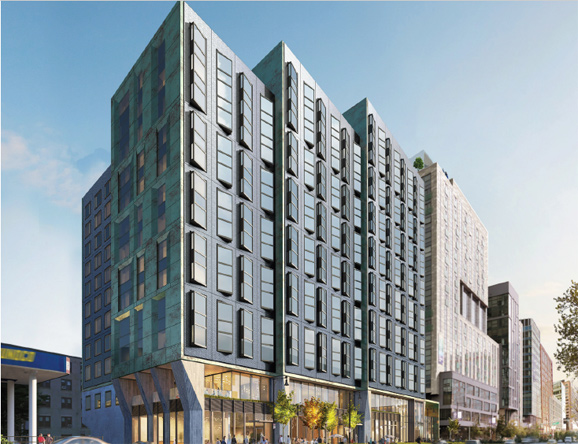 The Boston Sun reports residents living near Charlesgate and the Bowker Overpass are reporting more homeless people setting up camp there following the city's "Clean Sweep" along Methadone Mile.

State Police report the man who managed to carjack a Kia on the Bowker Overpass, drive against traffic and then flip the vehicle at the start of rush hour on Friday was arrested at the scene. Read more.

Boston Police report a man drove his car into the Muddy River at Charlesgate West early Tuesday evening, but that officers got into the river and got him out. Read more. 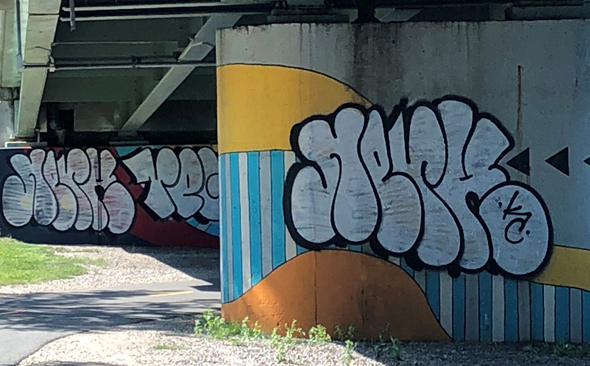 The Esplanade Association reports that sometime late last night or earlier this morning somebody spray painted over " Patterned Behavior," a series of three murals painted last year by Silvia Lopez Chavez on three supports and a wall under the Bowker Overpass. Read more.

Our own haunted condo building?

Aline Kaplan introduces us to the architecture and possibly haunted history of the Charlesgate, a hotel turned dorm turned rooming house turned dorm again turned condos at Beacon Street and Charlesgate on the edge of the Back Bay.

The glowing spirits of horses that died in a flood have been seen on the ground floor where a stable was supposedly located. The building’s original plans show no stable on the premises, although you can have night-mares without real horses.

The Boston Sun reports on the nascent Charlesgate Alliance, which aims to restore what grandeur it can to Charlesgate, once a tree-lined pond where the Muddy River entered the Charles but now a dumping ground where homeless people drown. 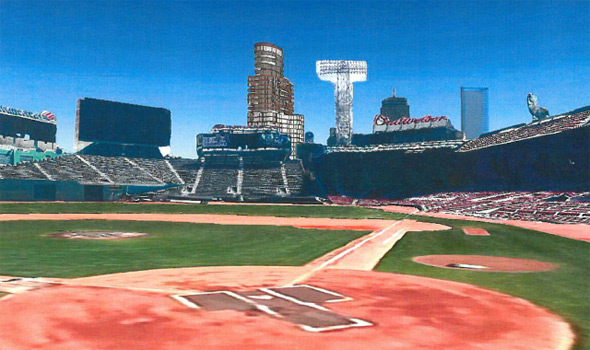 Gray Monster: Rendering by the Red Sox of proposed building

The Red Sox, the Fenway Civic Association, volunteer groups that look out for the Muddy River and the Emerald Necklace and Berklee College are all raising questions about shadows and winds that could be generated by Trans National Properties' proposed 29-story tower at Charlesgate. Read more.

The Boston Fire Department reports firefighters recovered a body from the river near where it enters the Charles around 2:45 p.m. 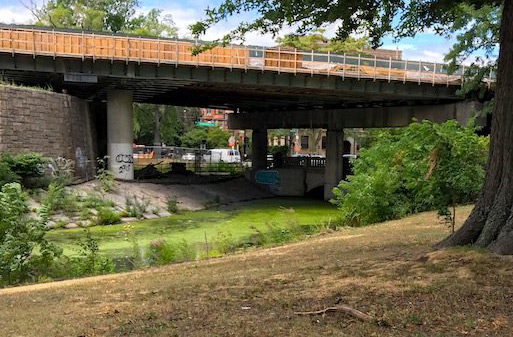 Penny Cherubino went for a walk on the normally green grass along the normally brown Muddy River the other day.

Car flips at Beacon and Charlesgate

Oops. Or as Rob Colonna writes, you might want to avoid the area for a bit. 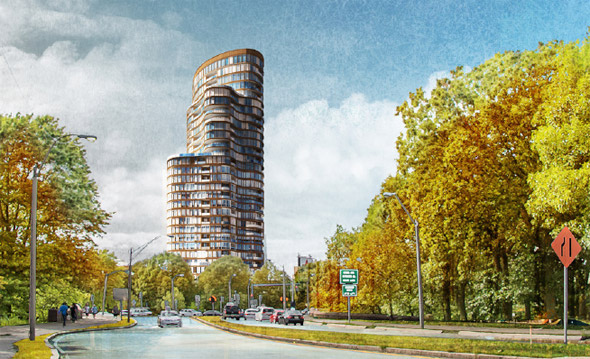 Trans National Properties is looking to replace a small office building it owns, where Charlesgate turns from the Bowker overpass onto Boylston Street, with a $250-million apartment and condo tower overlooking the Fens, the Muddy River and Fenway Park. Read more.

State Police and the Boston Fire Department report the death of a man spotted falling into the river at Charlesgate around 6 p.m. State Police report: Read more:

State Police report a woman heading from a ramp at Charlesgate onto Storrow Drive inbound "failed to slow and struck the barrier on the ramp" around 3:45 p.m.

The driver of the 2001 Corolla, 60, was rushed to Mass. General, where she was pronounced dead.

Body pulled from Muddy River; at least third one this year

A DCR worker discovered a man's body in the Muddy River in the area of the Bowker overpass around 10 a.m. today, the Suffolk County District Attorney's office reports.

A tentative identification has been made based on a missing-person's report, the DA's office says, adding foul play does not appear to have been involved.

It's the same general location where bodies were found in June and March.

Not a river you want to fall into

On Friday, Ed Hatfield photographed the Muddy River under the Bowker Overpass at Charlesgate:

That basketball has been there for at least 5 years, the soccer ball about eight and I think the baseball was a Babe Ruth homerun knocked out of Fenway Park. This is part of the reason the Charles River is getting cleaner. I think every thing that ends up in the water from JP down stream ends up here and it is blocked so it doesn't go into the Charles River basin.

Yesterday, for the second time in three months, a body was recovered from the Muddy River, just upstream from this location.

Boston and State Police shut Charlesgate East at Commonwealth Avenue and the Bowker Overpass after somebody found a pressure cooker just lying there.

The device was a pressure cooker, appeared to be discarded. Does not appear to have been a explosive device. Under investigation.

MIT scientist on bicycle struck, killed by truck at Beacon and Charlesgate; driver drove away

The scene. Photograph by Cory Gardner.

Kanako Miura, 36, a visiting scientist at MIT's Computer Science and Artificial Intelligence Laboratory, died this afternoon when she was struck by a dump truck, MIT and Stanley Staco report.

Boston Police report the victim was pronounced dead at the scene shortly after the 3:30 p.m. incident.

A mangled silver and black bicycle, believed to be hers, was found several blocks away on Bay State Road at Silber Way, Brian D'Amico reports.