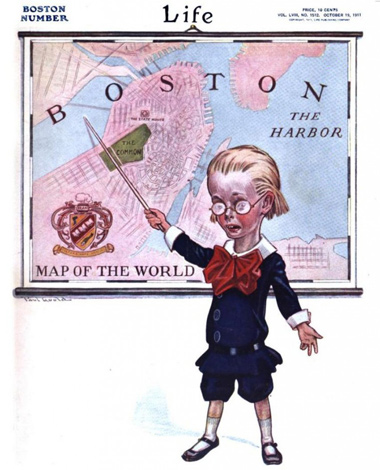 What Boston is: The Hub of the Universe. First coined by writer Oliver Wendell Holmes, who actually referred to the State House as the hub of the solar system; for many years, a plaque in the sidewalk in front of Filene's downtown commemorated the exact center of the universe (Ed. note: As of April, 2015, the marker is back!). Actually, pretty much the only people who use the word anymore are headline writers looking for a short synonym for "Boston,'' as in the aprocryphal Globe headline:

Note: On 7/31/97, the Globe actually ran the following headline on the front page:

Wicked important note: Holmes did not utter the phrase as a compliment, as you can see from the passage in which he used the phrase:

A jaunty-looking person, who had come in with the young fellow they call John,--evidently a stranger,--said there was one more wise man's saying that he had heard; it was about our place, but he didn't know who said it.--A civil curiosity was manifested by the company to hear the fourth wise saying. I heard him distinctly whispering to the young fellow who brought him to dinner, Shall I tell it? To which the answer was, Go ahead!-- Well, he said,--this was what I heard:--

"Boston State-House is the hub of the solar system. You couldn't pry that out of a Boston man, if you had the tire of all creation straightened out for a crowbar."

Sir,--said I,--I am gratified with your remark. It expresses with pleasing vivacity that which I have sometimes heard uttered with malignant dulness. The satire of the remark is essentially true of Boston,--and of all other considerable--and inconsiderable--places with which I have had the privilege of being acquainted. Cockneys think London is the only place in the world. Frenchmen--you remember the line about Paris, the Court, the World, etc.--I recollect well, by the way, a sign in that city which ran thus: "Hotel de l'Univers et des Etats Unis"; and as Paris is the universe to a Frenchman, of course the United States are outside of it.--"See Naples and then die."--It is quite as bad with smaller places. I have been about, lecturing, you know, and have found the following propositions to hold true of all of them.

1. The axis of the earth sticks out visibly through the centre of each and every town or city.

2. If more than fifty years have passed since its foundation, it is affectionately styled by the inhabitants the "good old town of"----(whatever its name may happen to be.)

3. Every collection of its inhabitants that comes together to listen to a stranger is invariably declared to be a "remarkably intelligent audience."

Glossary:
G-H
Neighborhoods:
Boston
Ad:
Like the job UHub is doing? Consider a contribution. Thanks!

I just looked at the July 31, 1997 Boston Globe. The headline "2 Hub men die in blast;New York also destroyed" does not appear in that issue.

I've changed the wording to make it clear that the *actual* Globe headline was about mediocrity, not New York. Sorry for the confusion.

I'm retracing my steps to see if the reference to Boston as the "hub of the universe" first appeared in the Atlantic Monthly. Can anyone help? Did this appear in a Boston Globe magazine recently?

The headline mentioned, "2 Hub men die in blast, New York also destroyed" appeared in a parady newspaper call Not the Boston Globe published sometime back in the 1980's. I have a copy of it somewhere. The actual headline, was "Hub man dies in Nuclear Blast" You had to read further into the article before you figured out that a nuclear bomb had accidently been detenated in New York City. It also had the other great headline, "Heat wave predicted, followed by flooding".

i've looked hard for this marker, wish and hope it exists. boston is indeed the hub:politically,geographically,historically,socially,literally and figuratively, in technology, medicine, education, look at a map, consider the commerce and shipping and exploration and world trade to and from the city and nation from before and through the founding of the nation to present, persons, achievements, firsts. certainly, at least holmes deserves our [bostons] recognition and memorial; at present there is none

i've searched hard for this marker; wish and hope it exists.mention it in a tour. found a circular city marker just off wash st. boston was [IS!]the hub-politically, geographically, historically, socially; literally and figuratively in medicine, education,technology,sports, exploration,look at a map [LOOKS like a hub] and consider the shipping and commerce and people that came from and to and through this 'city on a hill' to the whole world before and through the founding of the nation to the present,achievements, persons and many firsts. boston is a world city and needs no apology. his satire clear and pride of place unreserved. holmes himself,at least,deserves our [boston's]recognition and memorial; at present there is none.

i've searched hard for this marker
Perhaps you mean this stone: http://www.celebrateboston.com/sites/boston-stone.htm?

You can see it now

This is an old one. But with the new brick sidewalk work outside the old Filene's building, you can see the stone plaque in all it's glory. It's several feet across, gray stone-- set in the brick walkway at the entrance to the pedestrian walkway at Washington Street downtown near Macy's.

The Hub of the Universe

Hub of the Universe

Years ago, when I was in college, I told my Bronx-bred roommate that Boston is the Hub of the Universe. Her response: "Yeah, where all the grease collects."

Whole Hub of the Universe

In the late 1960s, newly moved to the Boston area, I was given this explanation of Boston as the whole hub of the universe: It's equidistant from the sun (by the speed of light) and Harvard Square (by T). Of course now, in early February 2015, there are days when neither sunlight nor the T is getting through.