Yes, it has come to this: Eric Casey reports an alleged "major motion picture" is seeking somebody to play our local musician: "Must have keytar and bear costume."

Bears of a Feather

A bear for all seasons 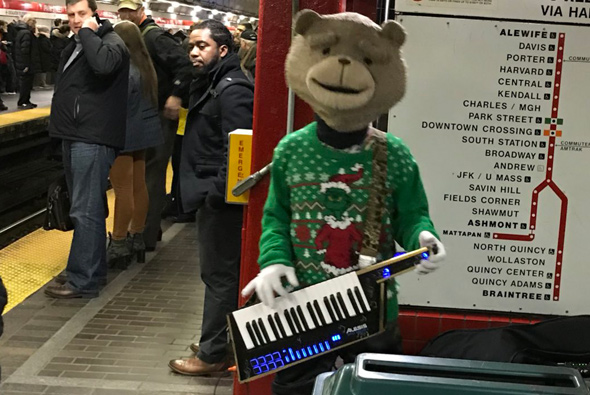 Maria M., meanwhile, caught him upstairs at Downtown Crossing a couple of nights ago.

The Bear is back 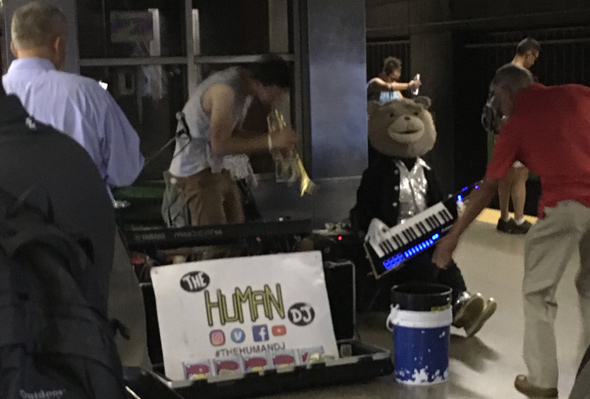 After recuperating from a May motorcycle wipeout, Keytar Bear is back. L Conley spotted him at Back Bay on the Orange Line.

Loren McLean reports it was awesome to see him back: Read more.

Keytar Bear gets his own beer; some of the proceeds to help him recover from motorcycle accident

Mass Live reports on Trillium Brewing Co.'s newest offering, which is called, no, not Keytar Beer, but Keytar Bear Double IPA. Part of the proceeds will go to the Bear, currently recovering from a motorcycle wipeout that left him with various injuries.

No Keytar Bear this summer

Boston Magazine reports Keytar Bear is out of commission for the next couple of months due to a broken ankle and foot suffered in a motorcycle accident - he hit a patch of sand left over from the winter on Rte. 146 (which runs between Worcester and Providence) and spun out. 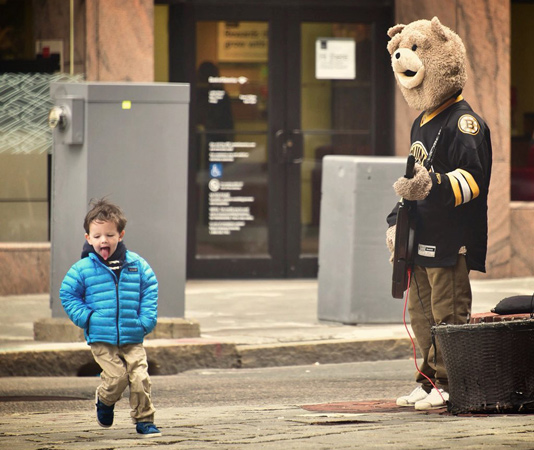 JB Parrett caught a performance by Keytar Bear and a fan the other day.

BosBattle reports on how our own Keytar Bear became a character in a phone game produced by a Sega subsidiary that is based in Cambridge.

One key(tar) difference between real life and the game: In the game, Crazy Taxi Gazillionaire, he plays a taxi driver, rather than Boston's furriest street musician.

Dapper bear without a care

Jason watched Keytar Bear, "the hero we need in trying times like these," at Park Street late this afternoon.

Vanessa Kuo spotted him outside Trinity Church in Copley Square yesterday, four days after he was beaten downtown.

The three New Hampshire teens charged with beating Keytar Bear - from Londonderry, Salem and Manchester - were ordered to stay away from Faneuil Hall and Keytar Bear at their arraignments today on charges of delinquency for assault and battery and disorderly conduct, the Suffolk County District Attorney's office reports. Read more.

Welcome to Dot reports Keytar Bear was attacked outside 60 State St. this afternoon by a bunch of alleged douches who tackled him, destroyed his amp and took his tip money. Read more.

Wonder if he played Revolution

That's got to be our Keytar Bear, right? Hopefully, he stays well away from Times Square - furry performers get stabbed there.

Keytar Bear has a posse 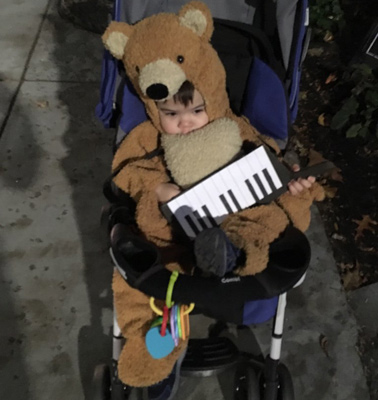 GHSOT shows us this mini Keytar Bear on the move in Cambridge.

In deeds race, one candidate knows who Keytar Bear is, another doesn't

Politico reports that while Suffolk County Register of Deeds candidate John Keith had Keytar Bear at his formal campaign kickoff this week, Steve Murphy had no clue who Keytar Bear was. Read more.

A green day in Copley Square 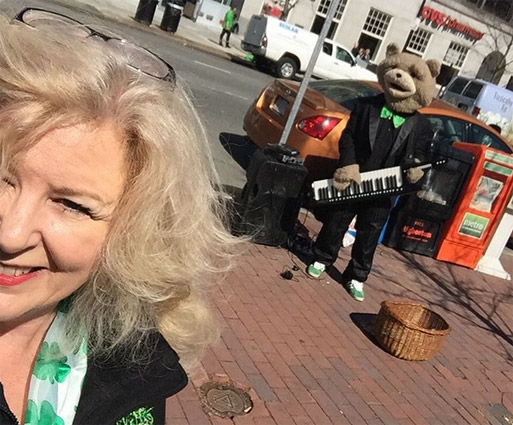 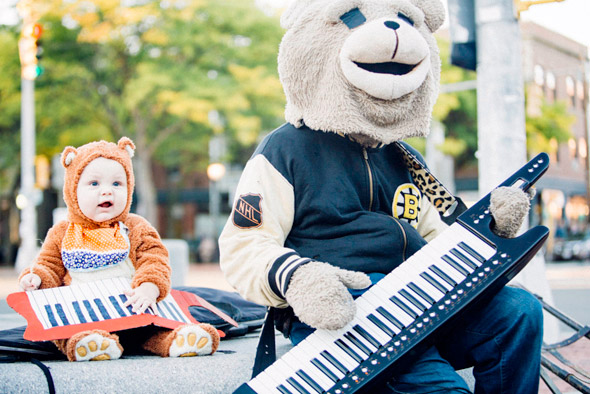 Boston Reddit summarizes a punching match between Keytar Bear, a woman and the woman's boyfriend on Boylston Street near the Apple Store Monday afternoon.

Not long after, BPD put out a BOLO for a man "wearing a teddy-bear outfit." But he was performing at Park Street yesterday evening.