Janey outlaws tents, couples their removal with increased efforts to get their occupants into treatment and housing

Acting Mayor Kim Janey today announced an executive order that aims to move people now creating tent cities at Mass and Cass and elsewhere in Boston into treatment and housing.

"To be clear, tents are not appropriate for housing," because they lack basic services and lead to infectious diseases, violence and human trafficking, Janey said at City Hall. Read more.

Edwards says she actually supports the idea of Indigenous Peoples Day; it was the way that Janey unilaterally decreed one that upset her

City Councilor and state-senate candidate Lydia Edwards yesterday apologized for her comments on Wednesday, which many took as a defense in support of Columbus in her current and possible future districts, which have significant Italian-American populations. Read more.

Acting Mayor Kim Janey today signed an executive order declaring the second Monday of every October as Indigenous Peoples Day, to honor the people whose genocide began with the voyages of the day's previous honoree, Christopher Columbus. Read more. 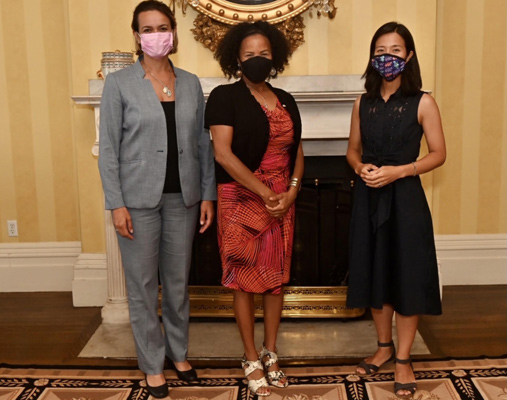 Acting Mayor Kim Janey met with Annissa Essaibi George and Michelle Wu yesterday to begin planning the transition for when one of the candidates takes over at City Hall in November. Read more.

Janey doesn't quite call the mayor of Revere a liar, but she gets pretty close

Yesterday, Revere Mayor Brian Arrigo declared the Boston Public Health Commission a pack of disorganized buffoons trying to foist Boston's Methadone Mile problems on his fair city by sticking some Mass-and-Cass people in a currently unused Quality Inn there - with no prior notice to him.

Looks like BTD kept up with the election results 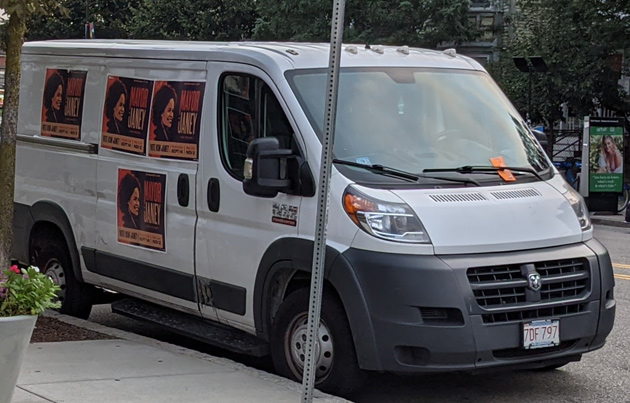 A roving UHub photographer captured the scene outside the Jamaica Plain Whole Foods this morning.

King, who came closer than any other Black candidate to getting election mayor, when he got into the final against Ray Flynn in 1983, tonight said he's with acting Mayor Kim Janey in tomorrow's preliminary: Read more.

Acting Mayor Kim Janey said today the city will spend $2 million renovating space in the Muni on River Street in Hyde Park's Logan Square to serve as a new health center for a neighborhood that has a lower life expectancy than the city average. Read more.

Election roundup: It's never too late for endorsements

Election roundup: Time to get your votes in; Janey hits Essaibi George on evictions

Suffolk County Sheriff Steve Tompkins has hopped back on the Wu train. Tompkins, who has backed Wu in her council races and who worked together for Elizabeth Warren, said: Read more.

Massimo Tiberi, owner of Arya Trattoria on Hanover Street, posts Instagram photos of celebrities posing with him. So when Kim Janey walked in last night, he had a pic snapped and posted it - and then fairly quickly took it down because neither of them had a mask on, which proved a tad embarrassing given that Boston's indoor mask mandate, which Janey herself announced, went into effect Friday morning. Read more.

Acting Mayor Kim Janey today cited Boston's unique vulnerability to rising sea levels in announcing she was withdrawing a waterfront plan developed by then mayor Marty Walsh under which the Chiofaro family would have finally gotten to build a skyscraper next to the New England Aquarium, long blocked because of the family patriarch's unceasing feud with Tom Menino, and which would have let developers replace the James Hook seafood trailer and the rest of its fire-ravaged pier with a hotel. Read more.

Acting Mayor Kim Janey announced today that the city will phase in a mandatory vaccination requirement for its 18,000 employees over the next two months. Read more.

Election roundup: Being a progressive in Boston can be tough, JP Progressives conclude

Looks like Rudy Giuliani has something new to grab onto besides his chram: Kim Janey's comments about Covid-19 vaccinations being somehow equivalent to slavery and birthers: Read more.

Election roundup: What do politicians from Savin Hill have against the T?

Annissa Essaibi George gets interviewed by boston.com, and like Marty Walsh, who also grew up in Savin Hill, acknowledges she just doesn't take the T. Also, the idea of making the T free, outside of maybe a couple of bus line in poor neighborhoods, is silly, she says, without naming the idea's two proponents - her competitors Michelle Wu and Kim Janey, both of whom are, or at least were in the Before Times, frequent T riders. Read more.