Does anybody ever actually seek out Greek pizza? 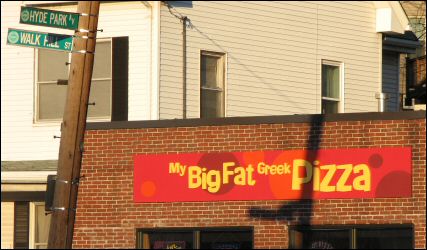 Mmmmmm Greek pizza. I love it and I seek it out - it is one of those New England things that makes me proud to be a New Englander - seriously! When I lived in CA greasy Greek pizza is what I missed most.

I LOOOOOOOOOOOOOOOVVVVVVE Greek Pizza. I can't say that I seek it out, but when I find a place (there's Olympic in Wolcott Square in Hyde Park and Islington Pizza in Westwood, for example), I tend to burn it out because I order from it so much. There's something about the crispiness of the crust, perhaps from the edged pans they cook it in that really appeals to me.

Don't get me wrong. I love regular old Italian pizza, independent and chain-style. But there's something about Greek pizza that I really enjoy. Perhaps it's worth a trip to Walk Hill Street. Do they deliver?

Greek pizza is the best!

You bet. I'll take greek pizza over any other any day of the week.

Our current haunt is Athen's Pizza in Leominstah.

From the brains behind http://www.bigdumptruck.com

Hey!  I lived in that white house right next to the new Greek
pizza joint (and visible in the photo) in JP for almost 2 years, just
before I moved to Eastie.  That abandoned building was SUCH an
eyesore -- not that our house was so grand -- so I'm happy that they
finally opened something there.  While I lived there, several
proposals went to the zoning committee (or whomever) for liquor stores
to go in that spot.  Each time, the neighborhood made a good
showing at the committee meetings to voice its/our strong feelings that
the one thing the neighborhood did NOT need was another liquor store,
but that a small sandwich place or restaurant would be a good
addition.  Although I prefer "New York-style" pizza to Greek, and
of course I think the name of the place is silly, I say ROCK ON to the
new establishment at 10 Walk Hill Street.

This is a good addition/replacement. It never seems crowded. I hope they get enough traffic to survive.

My 12-year-old loves the pies (although he's not crazy about the house version; he likes his veggies raw and would rather have feta on it). We wait for his school bus five days right in front. He was getting increasingly crazed in the months it took them to open after they initially put a sign up. Now he wants a slice every time we pass that it's open. Fortunately, they don't serve breakfast pizza.

The rest of the family enjoys the light, non-oily crust. Given the choice, three of the four of us would rather have Dogwood's. The prices are the same.

For those within a couple of miles, they do deliver.

That's a odd corner. We've lived in the neighborhood 17 years. The realtor used that building as a selling point -- easy access to bread and milk. That was when it was in the tradition of SNL skits -- a small, filthy grocery store. This is a huge improvement.

Across the street is a Dunkin' Donuts that for as long as folk could remember was one of the Doughboy stores. Back then, it had vastly better doughnuts...and, no joke, because it was open 24 hours, it always had cops there. I'd bet the druggies who hang out a quarter mile away around the Forest Hills T station would not be there if it still was a Doughboy.