You can't keep a good Republik down

Boston Restaurant Talk reports a proposed bar called New Republik on Cambridge Street in Inman Square seems to be backed by some of the people who ran the now shuttered People's Republik on Mass. Ave.

Bukowski Tavern to be replaced by another bar

Boston Restaurant Talk reports on a hearing on the proposed new use for the space left vacant when the Inman Square watering hole closed.

Cambridge Police report on a crash at Cambridge and Hampshire streets in Inman Square shortly before 8 a.m. on Monday: Read more.

Bukowski Tavern in Inman Square looking like a gonner

WGBH takes a stroll down Sesame Street, um, through Inman Square in 1970:

Take a stroll through Inman Square, Cambridge in 1970. pic.twitter.com/GKbXFIb6XB

This bird speaks for everybody outside today

Gedalia Pasternak spotted this bird in his front yard in Inman Square today; reports the bird was like that for at least ten minutes.

Parts of Cambridge go dark when a manhole explodes

The Cambridge Fire Department reports a manhole at Cambridge and Tremont streets exploded around 8:50 p.m.

Eversource reports it hopes to have power restored by 10:45 p.m.

Cambridge Police have released a photo of a pedestrian they say used his shoulder to push a bicyclist off her bike in Inman Square on Sept. 22.

Bicyclist dies after being hit by truck in Cambridge

Amanda Phillips, 27, of Cambridge, died today after being struck by a landscaping truck at Hampshire and Cambridge streets in Inman Square, the Middlesex County District Attorney's office and Cambridge Police report.

Phillips was hit around 12:17 p.m. and was taken to Massachusetts General, where she was pronounced dead. Authorities said their investigation into the crash is "open and active."

What's black and white and spotted all over? 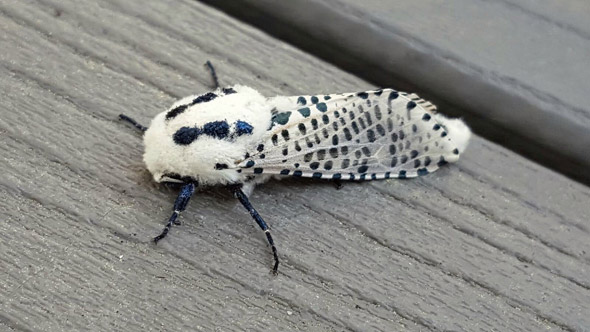 LadyLazerJ spotted this leopard moth at Beacon and Calvin streets on the Somerville side of Inman Square the other night.

Copyright LadyLazerJ. Posted in the Universal Hub pool on Flickr.

Giant marshmallow on a stick in Inman Square 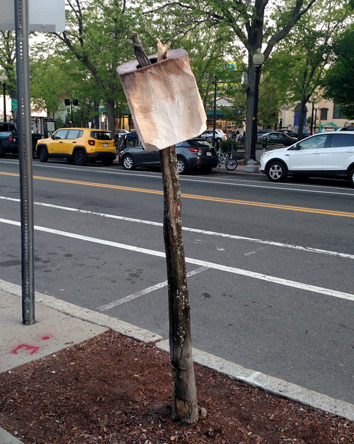 We saw this half cut down tree on the way home from our favorite bar last weekend and it looked like it needed a marshmallow.

So she made one.

Around 9:30 p.m., moving towards the west over Winter Hill in Somerville, Pancake Witch reports. 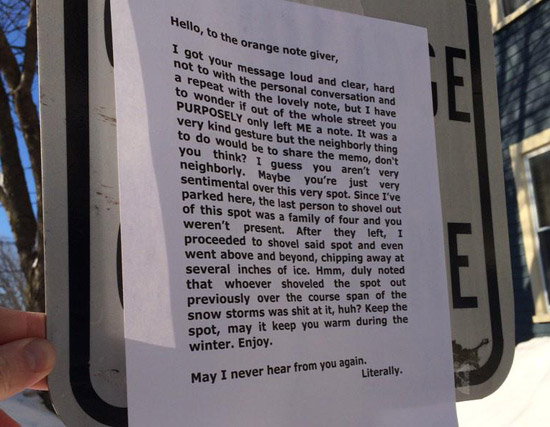 Yesterday, some guy posted a note on a parking space he shoveled out on Tremont Street in Inman Square saying anybody was free to use it as long as they didn't attempt to claim it with a space saver - and that he would remove and throw out any space savers. He wrote it on orange paper, of course, to make it stand out.

Inman Pharmacy still not a drive-thru

Michael Peretti surveyed the damage at the Inman Pharmacy on Cambridge Street around 12:50 p.m.

In Cambridge, even the trash is erudite

Residents of two Cambridge neighborhoods could hear gunfire tonight, but it's only a test

Cambridge Police report officers will fire guns between 8 and 9:30 p.m. in Area 4 and Inman Square to test the city's new system for detecting gunfire.

The city is installing a ShotSpotter Flex system, which uses sensitive sensors and software to help police "hear" gunfire. The tests are to help calibrate the sensors. Boston has had a similar system in place in high-crime areas for several years now.

Now that motorists know to use their blinkahs, Cambridge bicyclists urged to ride wicked smaaht

It's tough filming in the rain

Chris Rich photographed the filming of establishing shots for an ABC Family series in Inman Square today, even as it rained.

Snowman with a 'stache