MassDOT said today it will experiment next week with letting Silver Line buses use a ramp from the South Boston Haul Road to I-90 that, if nothing bad happens, could lead to shorter rush-hour rides between downtown and Logan Airport and Chelsea on Silver Line bus routes. Read more.

The Globe reports that the investigation into the overtime scandal began when a Harvard-trained Asian-American doctor fluent in four languages was stopped in the tunnel by a trooper she says kept screaming at her, demanding to know if she spoke English and that bothered her enough to file a complaint.

Massive delays and severe delays on the Silver Line.

The remains of the SUV.

The Animal Rescue League of Boston reports that with the help of state troopers, it rescued a cat that somehow wound up inside the Ted Williams Tunnel. Read more.

A trash truck burst into flames in the Ted Williams Tunnel around 12:50 p.m., shutting the tunnel and sending a plume of black smoke high into the air by way of the tunnel exhaust-vent building across from the South Boston convention center. Read more.

Two dead after hotel van is rear-ended near Logan Airport

A Boston man faces OUI and other charges while the MassDOT worker he allegedly hit early this morning remains in the hospital with serious injuries, State Police report. Read more. 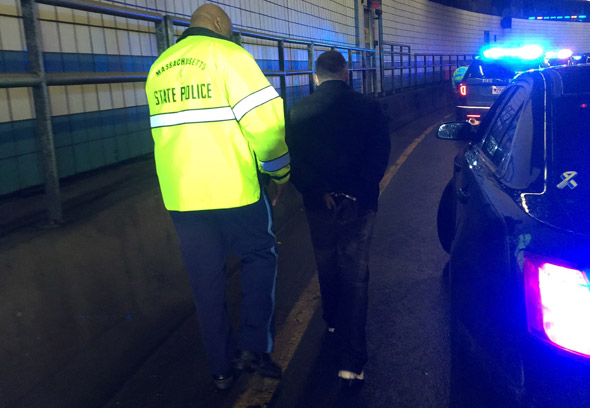 State Police report arresting a Somerville man for trespassing last night - after first rescuing him from the storm drain next to a ramp to the Ted Williams Tunnel.

While checking the area, Trooper Eric Chin observed a hand waiving from an upper vent on the tunnel wall. Lieutenant David Wilson and Trooper Chin located the man in a vent shaft, approximately 15 feet up, sitting on a pipe attached to the wall.

A bit of flooding down there.

Where's Chris Christie when you need him?

Leverett Circle to remain a mess through rush hour

MassDOT alerts us that, once again, you'd best avoid Leverett Circle during the evening rush due to those still uncompleted repairs.

Separately, the state says it's shutting the westbound side of the Ted Williams Tunnel between 11:30 p.m. and 5 a.m. for some maintenance.

Holey moley: Boston firefighters pull another worker out of a shaft

EMTs get injured worker to ambulance. Photo by BFD.

Boston firefighters spent two hours early this morning getting a state transportation worker out of a shaft connected to the Ted Williams Tunnel.

According to the Boston Fire Department, the worker plunged 20 feet down a shaft into a pool of sludge around 1 a.m.

Using ropes and pulleys, firefighters lifted the worker out after about 2 hours in the hole. He was washed down as part of a decon.

The worker was taken to Mass. General. The department says the firefighters who rescued him were not the same ones who rescued an MBTA worker at the bottom of a shaft last week.

The shaft. Photo by BFD.

The driver was not a BU freshman

$15 billion and what do you get? A tunnel that's already too small for some trucks, that's what. The Globe reports the driver of a bigger than big rig smashed into an overhead sign in the Ted Williams Tunnel, then just kept going, at least, until some staties caught up with him on the Expressway in Dorchester.

The Outraged Liberal considers a possible real motive behind the humongous toll increases approved by the turnpike authority yesterday: Put pressure on the legislature to increase the gas tax.

He notes the tolls don't take effect until February or March, and not until after a public hearing (where will they hold that? Gillette Stadium?).

... Presumably, that would be enough time for Deval Patrick and legislators to get off their, um, sidelines, and approve a comprehensive plan to tackle the transportation nightmare (hey, throw in the disaster known as the MBTA while you are at it.) ...

Dan Kennedy on the turnpike authority: What, are they insane?

Jay Fitzgerald predicts we'll wind up with a toll increase, a gas-tax hike and the transfer of turnpike "hacks" to a new state authority. He uses a classic cartoon to illustrate how he feels this morning.

Modern Continental also has to keep paying for bonds for six years in case anything else goes wrong.

Airport travelers to get socked by tolls

The Globe reports on toll increases approved by the turnpike authority today for the Weston and Allston/Brighton tolls and the harbor tunnels, starting in February or March. Most notable: Tolls at the Sumner and Ted Williams tunnels will increase from $3.50 to $7 - although FastLane users will get to pay just $6.

The Lone Rider adds them to his list of Silver Line buses he will never get on again. Latest on his list: Bus 1131, which broke down in the Ted Williams Tunnel, causing a horrific traffic jam that meant it took him 47 minutes to get from Logan to South Station.

Alicia, meanwhile, uses her BlackBerry to report that the driver on the 7 bus is actually going too fast:

... She is speeding like crazy and then slams on the breaks if she has to pick someone up. Everyone's heads are whipping forward when she finally decides to break last minute. If there is a service slowdown going on, this chick is definitely boycotting it. Ugh, I need a barf bag. ...

'Substantial' toll hikes in the works for turnpike, tunnels

"The last thing I'd want to be associated with is another Longfellow Bridge," [Turnpike Executive Director Alan] LeBovidge said, referring to the 102-year-old span over the Charles River that had to be partially closed this summer when it fell into disrepair.

Yeah, because we all know how well built those turnpike-controlled Big Dig tunnels are.

Ten current and former toll collectors at the Ted Williams and Callahan tunnels were charged today with stealing toll money from the Massachusetts Turnpike Authority, which owns the tunnels.

As vehicles pass through the tolls, the collector is supposed to hit a switch indicating the type of vehicle passing through and collect the appropriate fare. In most of these instances we've charged, toll collectors would classify some of the taxi cabs or other commercial vehicles as ordinary vehicles, but charge the drivers the higher toll rate and pocket the difference.

Another scheme involved toll collectors manipulating the timing switch used to count cars so that two vehicles would be counted as one. Again, the toll was collected from the uncounted vehicle but pocketed by the toll collector. The dollars stolen from the Turnpike by misclassifying or miscounting vehicles could range anywhere from $20 to $150 per toll collector, per shift, and amount to thousands of dollars.

State Police began their investigation last October. The ten were issued summons to appear in Boston Municipal Court to answer the charges.