Boston Police report arresting a Jamaica Plain man they say scoped out three banks along Centre Street yesterday before finally deciding to rob the Citizens Bank branch at 696 Centre St., next to the 7-Eleven. Read more.

Boston Police report arresting Thomas Hickey, 49, of Charlestown, for a Nov. 30 bank robbery on Austin Street in which he allegedly pushed an elderly man who was in line before him out of the way at a teller window. Read more.

Not a good day to be a Citizens Bank customer

Citizens Bank customers are flooding Twitter with complaints about the inability to access their money. Shortly after 4 p.m., the bank acknowledged a problem:

We're currently experiencing a technical issue that is impacting our ability to process certain transactions and access some online systems. Thanks for your patience as we restore service. We apologize for the inconvenience, and will post updates as they become available.

Guy tries to hold up West Roxbury bank, but runs away with no money

Police are investigating an attempted holdup at the Citizens Bank branch at 673 VFW Parkway (the strip mall where Gary's is) around 12:40 p.m. The suspect, described as a black man, about 5'6" and in his 30s and wearing black clothes, a black hat and sunglasses, fled without any money onto Independence Drive.

The Citizens Bank branch at 26 Central Sq. was held up around 9:10 a.m. by a white or Hispanic man, about 5'4" with a light beard, wearing a hoodie with gray, black and red stripes. He showed a note, then fled with cash in an unknown direction.

Teller at Mattapan bank admits she embezzled $172,551 from customer

J'Cynda Sales, a teller at the Citizens Bank branch on Blue Hill Avenue in Mattapan Square, admitted yesterday that she drained a customer's account of the money over a six-month period, the US Attorney's office reports. Read more.

The FBI's Bank Robbery Task Force reports the Citizens Bank branch at 777 South St. was held up on Thursday afternoon.

The suspect is described as being medium height and having a medium build.

Around 12:45 p.m. at the Citizens Bank branch at 73 Tremont St. by a heavyset black man with cornrows and wearing a pea coat. The money had an embedded dye pack, which went off as he ran down the street.

Shortly after 9:30 a.m., a man walked into the Citizens Bank branch at 560 Commonwealth Ave. and gave a teller a note demanding money, but then fled without any money.

He's described as white, tall, wearing sunglasses and a white or gray hoodie.

Boston Police report nabbing the guy who robbed the Citizen's Bank branch at 441 W. Broadway yesterday morning after he ran a few blocks away and then got into a cab. Read more.

Criminal pro tip: If you've nicked yourself shaving, you might want to put off that bank robbery you'd been planning

Boston Police report a man who robbed the Citizens Bank branch at 441 W. Broadway yesterday afternoon tried to hide his face by pulling his sweater over it. But he did that in the bank, and after a teller had noticed the Band-Aid on his face. Read more.

Boston Police have released photos of a man wanted for a Monday robbery of the Citizens Bank branch at One Financial Center - across Atlantic Avenue from South Station. 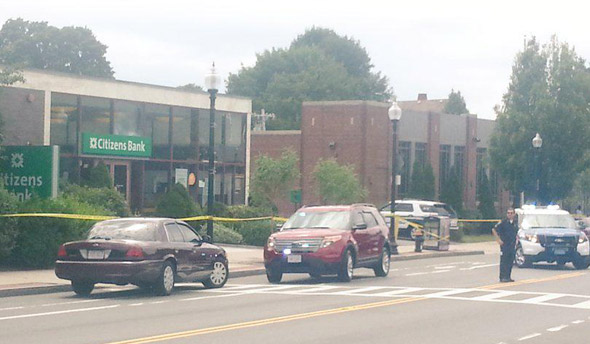 Taped off bank. Photo by Veranaika.

The Citizens Bank branch at 414 Washington St. in Brighton Center was held up shortly before 1:30 p.m., according to Veranaika and Stanley Staco.

Boston Police report arresting a Hyde Park man with a gun after he allegedly stuck up somebody who'd just made a withdrawal at a Citizens Bank ATM at 572 Columbia Rd. around 1:25 a.m. on Friday.

Police say the victim flagged down a passing C-11 cruiser and described the suspect, clad in a hoodie and pajama pants:

Citizens Bank this week sued the armored-car company that shuttles money to and from its branches and ATMs to make the company keep doing that until the bank can fully replace it.

In its suit, filed in US District Court in Boston, Citizens said Garda Atlantic had threatened to stop all its service today, a move that would have left "thousands of individuals and small businesses" unfairly without access to their money.

Around 10:30 a.m., a man with a cane walked into the Citizens Bank branch at 6 Ave. de Lafayette, gave a teller a note demanding money and got some. Police suspect the cane was a prop because he ran out of the bank. He's white, about 5'10" and wearing a blue jacket that says "US Polo Association" on the back.

Maybe he's saving up for a Christmas present for himself

A man with no front teeth tried holding up the Citizens Bank branch at 572 Columbia Rd. in Uphams Corner around 10:30 a.m., but fled without any money He's also described as black, in his 40s, about 5'10" with a slim build and wearing a white polo shirt.

Citizens Bank branch at 40 Summer St., around 9:40 a.m. Police report the suspect is a black man in his 20s, 5'8" to 5'10", wearing a black scally cap, a white short-sleeved shirt with a black checkerboard pattern, gray pants and black shoes.

The Citizens Bank branch at 6 Ave. de Lafayette was held up shortly after 9 a.m. by a black man, about 5'7" and thin, wearing a black knit Patriots cap and a gray dress shirt with the sleeves rolled up.