To boldly deliver packages where no packages have been delivered before 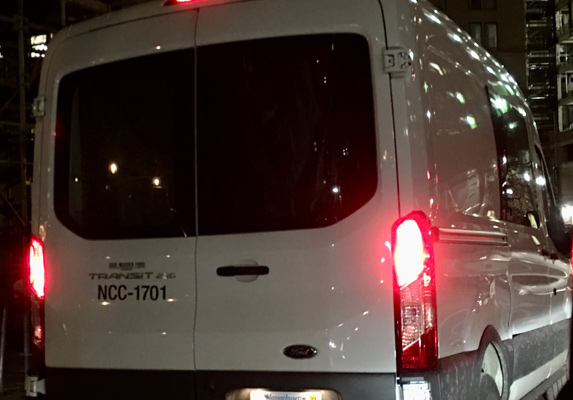 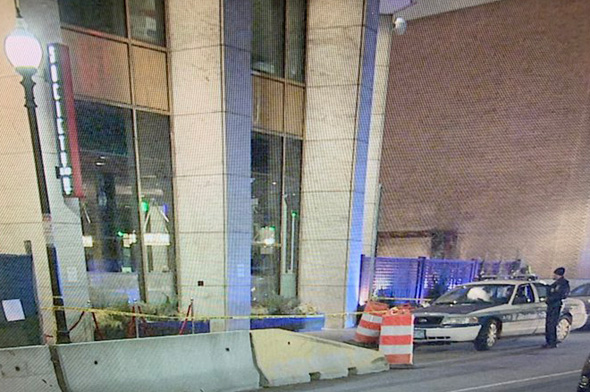 Society taped off. Photo by KMV.

I need a place for lunch in DTX/FD that serves soup & has cozy booths.

The Fiat that keeps getting towed

Seems Boston has this nifty little search tool that lets you type in a car's license-plate number and see when it was last towed (and to where).

Over on Boston Reddit, mac_question has been using the tool to follow the exploits of a 2017 Fiat sports car (no, that's not an oxymoron), whose owner keeps parking it haphazardly at Summer and High streets downtown. In the past three months, the car has been towed five times from that spot. Maybe it's still cheaper than a deeded parking space?

In a drive by around 10:45 p.m. on Broad Street at Franklin, Crime Hub reports.

Boston's own Diogenes, forever searching for that one good tire 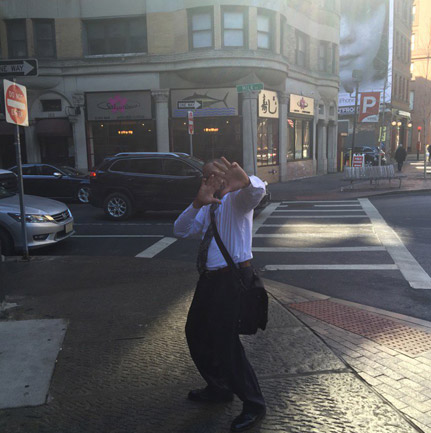 Jed Hresko was walking through the Financial District this morning when a guy who seemed vaguely familiar came up to him. He reports: Read more.

Today, we signed a Letter of Intent with UBS to move our editorial and business operations to 53 State Street, Exchange Place.

This is not Kendall Square 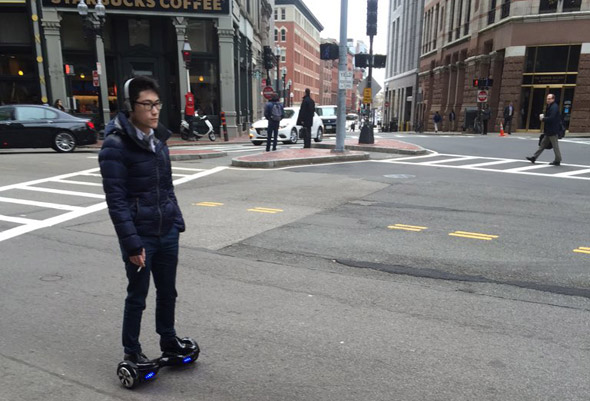 If you still needed convincing that Boston's Financial District is becoming more of Boston's Tech District, David Harris presents this photo of a guy tooling down the street on one of those new micro-Segwayish things this morning. 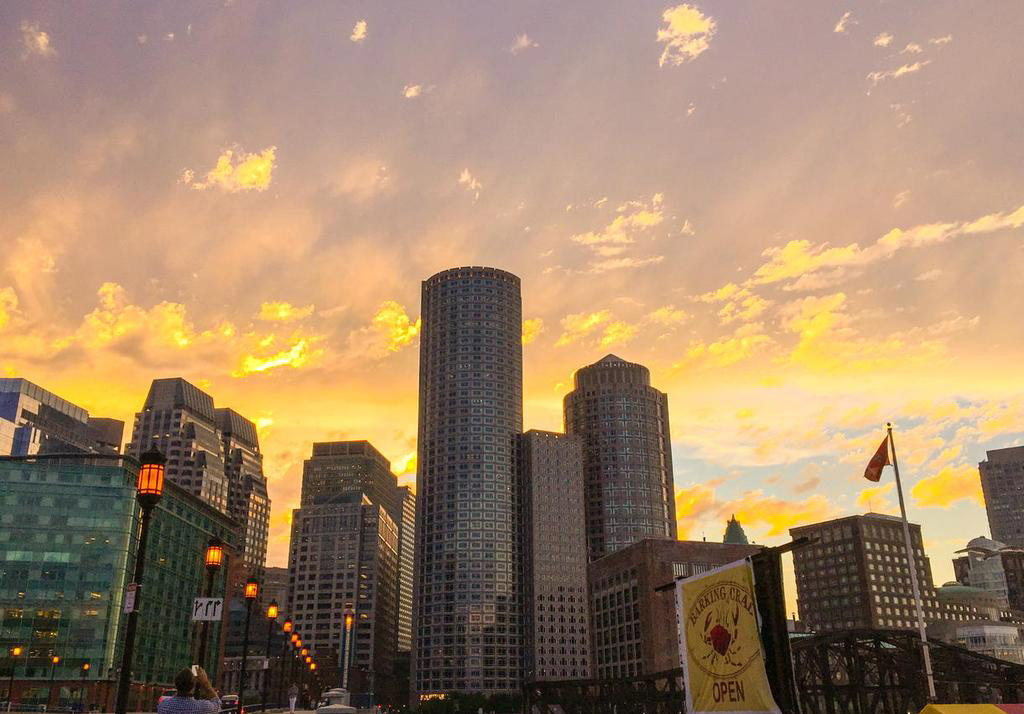 Wonderson watched the sun go down over downtown this evening. 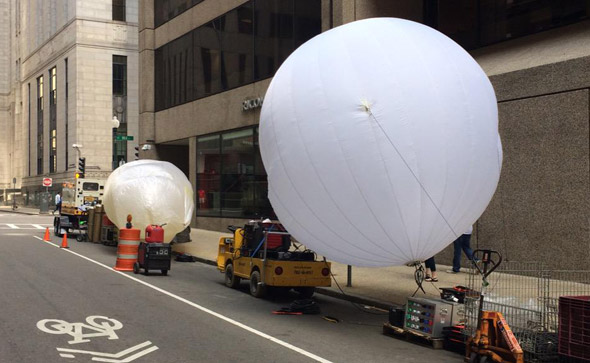 RoadTripNE spotted these large white blobby things, wondered if that meant the Stay Puft Marshmallow Man was about to assemble and destroy Faux New York down in the Financial District. 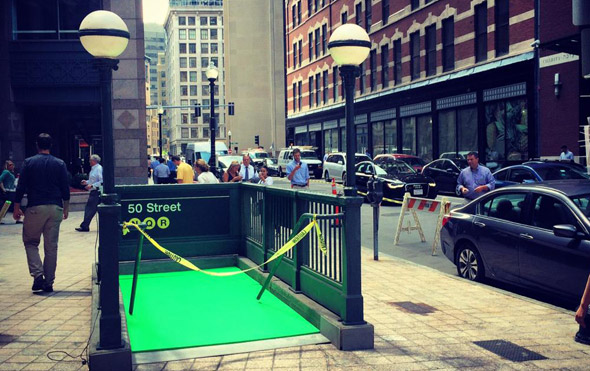 David Schachner marveled at the new subway entrance in front of 125 High St. today - but wondered who ya gonna call to find out when it opens to the public.

The arrival of artisanal European and Japanese coffee in downtown Boston has done nothing to shake our addiction to Dunkin' Donuts, apparently. The Boston Licensing Board decides tomorrow whether to grant a food-serving license to a brand-new Dunkin' Donuts at 89 Broad St. in the Financial District - four months after it approved a new Dunkin' Donuts on Washington Street. Read more.

Water Street is shut to drivers and pedestrians at lunchtime, and firefighters and EMTS are on standby, as the BPD bomb squad investigates a suspicious package wrapped in duct tape.

Rolling out the beige carpet in the Financial District 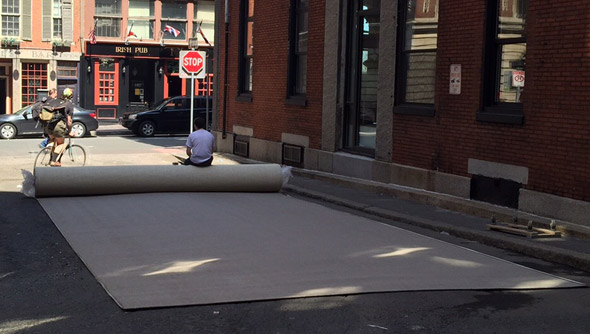 Downtown's getting so upscale they've started carpeting the side streets, apparently, as Jed Hresko shows us.

Friday brunch near the Financial District or Chinatown

Any ideas on where to take a group of ~10 people to brunch on a friday near the financial district/Chinatown?

On the Samuel Appleton Building. See it larger.

In the late 1800s, the merchant princes of Boston adorned their buildings with classical Greek and Roman symbols of successful seafaring commerce, such as Neptune's tridents and Mercury's caduceuses (Mercury being the god of trade and all).

And then, it stopped. Maybe it was the decline of Boston as a seaport, but whatever the reason, in the 20th century, financial firms took over from trading companies and turned to an even older culture - the Assyrians - for symbolism on their new buildings.

Downtown street shut for removal of icicles of doom

The Boston Fire Department ordered Purchase Street between Congress and Summer shut around 9:15 a.m. so workers could remove large icicles from buildings before they fall and impale somebody.

Adam Castiglioni posts a photo of the sign now up in Joshua's Deli on Batterymarch, which says they have no choice but to raise their prices come January, thanks to those meanies up on Beacon Hill.

Internet startup to move downtown from the suburbs

Acquia, which currently provides content-management applications and services plans to move from Burlington to 53 State St. next year, BostInno reports, adding the company will be doubling its space with the move.

Acquia's core offerings focus on an enterprise version of Drupal, a system originally written by Acquia founder Dries Buytaert. The software powers a number of large corporate Web sites, and also this one.