WBZ reports the driver of the trolley that derailed near Riverside this morning didn't have proper signal authorization to proceed; had been hired just this past March.

Transit Police report arresting a Somerville man for assault with a dangerous weapon for an incident this morning that started at the Riverside Green Line station, then continued on an inbound trolley. Read more.

Trolley under wraps at Riverside 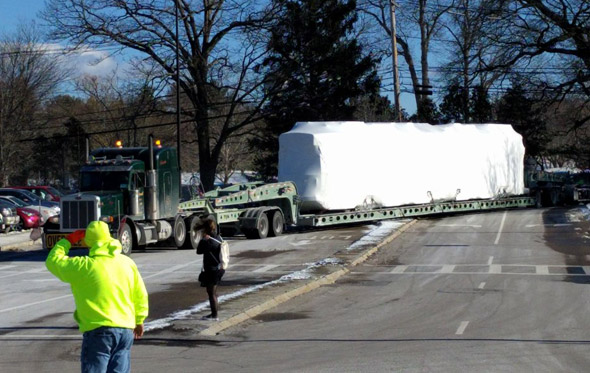 Older Green Line trolleys are being refurbished at a facility in upstate New York. Paul MacMaster watched one of them being delivered to Riverside today.

Riverside Line has power woes; riders know that that blows

Outbound riders on the Riverside Line had to board buses for the ride between Reservoir and Riverside this morning due to your basic generic "power" problems. The T says it's fixed now.

An inbound Worcester Line train hit and killed a man on the tracks in Auburndale around 9:15 a.m., Transit Police report, adding he was "trespassing" on the tracks.

The man, white and in his 50s, was hit just past where the line crosses the Charles River.

Passengers on the train remained onboard until about 10:25 a.m., when a rescue train pulled up beside it and passengers transferred for the ride towards Boston.

Conductor said someone was hit. All conductors are visibly shaken.

In addition to evacuating the trolley station, police also got people out of the parking lot of the office building next to the station.

Riverside MBTA stop closed because of a coffee maker.

A roving Universal Hub reporter filed this report from Woodland this afternoon:

From first hand experience (I was there), a 2-car train (cars no. 3645 and 3843) had their pantographs damaged when entering Woodland station, possibly due to an issue with the overhead wire there. They sent a team over there pretty quick and they tied down the pantographs and shut down the cars. Shuttle buses showed up at Woodland around 45 minutes later.

And that's why there was shuttle-bus service along the D line today.

A real clown, on a clown bike, who began yelling and making threatening gestures at a woman who didn't respond when he asked how to get to Waltham.

What is it about the Riverside line?

7:35 update: One could ask the same thing about commuter rail: As I type, there are 17 alerts about delays at the MBTA Web site.

9:00 update: Probably should have written "What is it about the T?" since switch problems at Oak Grove AND a dead train are causing agita on the Orange Line. Or as Boon Sheridan tweets: "Orange line from inbound from Oak Grove dead in the water. Seek alternate routes and aspirin."

Buses along the D this morning after a trolley decided it couldn't stand being on the tracks any longer (Ed. question: At Reservoir?).

8:45 update: MBTA.com is back up with delay information.

The Herald reports on what happens when you rely too much on technology.

Meanwhile, the Globe reports the T itself is cracking down on actual scofflaws at its parking lots.

MBTA General Manager Rich Davey reports the first three-car train will pull out of Riverside station 7 a.m. on Monday, with a second to follow at 8:30 a.m. In e-mail, he writes:

Workers and the remains of the tree: Photo by MBTA.

UPDATE: Service has been restored.

No trolleys, only buses between Reservoir and Kenmore due to a tree falling on the tracks in both directions.

I think I shall never see, a thing as trolley-unfriendly as a tree

Yes, another tree has taken out the Riverside line, this time by having the temerity to fall on the overhead wires near Longwood, sparking a brush fire. Massive bustitution and angst result.

Apparently not wanting to be left out, the C line got itself shut as well when an out-of-service trolley derailed at St. Mary's, Channel 7 tweets. More massive bustitution and angst result.

And Sean Roche wonders why not?

If a tree falls on the Green Line, you'll hear about it

This afternoon, a large tree fell from a Newton resident's backyard. It is leaning on the Green Line's overhead wire, just east of Newton Centre Station. As a result, the T has temporarily suspended Green Line service between Reservoir and Newton Highlands. Buses are replacing train service between the two stations and stops in between.

USGS data shows the Muddy River rapidly climbing the height ladder today. If it gets to 15 feet, the MBTA will haul out the large wooden boards and the sandbags and blockade the tunnel the Riverside Line uses to get into and out of Kenmore station.

They've been working on the railroad

MassDOT provided this photo of workers busy repairing the flooded-out Riverside track bed yesterday. Compare to the photos from the height of the nor'easter. The state expects to have service restored by Monday.

Flood waters recede, but not enough to allow repairs to damaged Riverside line

Sun shines on sinkhole: Compare today's photo by the T to yesterday's.

What a difference a day makes. However, MBTA spokesman Joe Pesaturo says he cannot yet give a definite answer on when the Riverside line can be re-opened. "Flood waters continue to flow through the site, and work crews cannot even begin to start rebuilding the rail bed until the water recedes."

The sinkhole that ate the Green Line